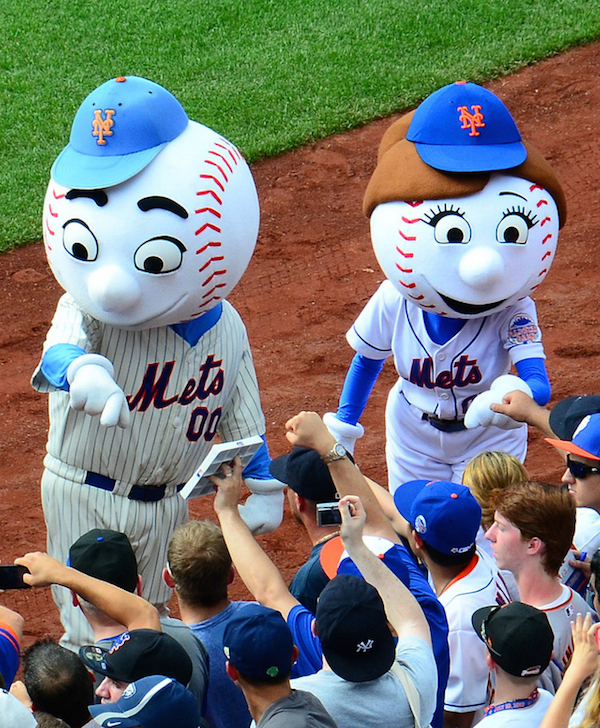 The sports and pop culture media outlet, Grantland, is featuring six short films by Errol Morris this week in a series they’re calling, It’s Not Crazy, It’s Sports. I’ve been following along, watching, thinking, and reviewing here. I wrote about the first film in the series, The Subterranean Stadium on Monday, and the second and third films, The Heist and The Streaker on Wednesday. Today’s release is Being Mr. Met an extended interview with AJ Mass, the first person to play the New York Mets mascot when the team revived the character in 1994.

Being Mr. Met is a disappointing effort in what is increasingly a let-down of a series from one of my favorite film-makers. Of the four films, only the first had the type of emotional depth that can elevate this type of short film. Morris barely scratches the surface of what it’s like to be the person inside of a mascot costume. Oh, sure, there’s the obligatory mascot getting hit in the nuts story as well as what could have been a truly scary moment with a group of middle-schoolers with baseball bats. There’s a gesture (one might even say a head-fake to use sports language) at the disconcerting process of separating the actor from the character when Mass was fired by the team.

Mass is a modestly interesting character but nothing in this film even approaches the hilarity and interest in the excellent This American Life radio piece about Navey Baker, a shy high school girl who comes alive when she puts on the school’s tiger mascot costume. That story grabs your attention from the beginning by describing Navey as a four year-old obsessed with pretending to be a dog.

Navey drank from a bowl, crawled around sniffing crotches, and, let’s let her Dad tell the piece de resistance:

I mean, I was fine with her being a dog until she started crapping in the yard. I didn’t think that was very funny [chuckles]… it is funny though.

From that moment on, you’re transfixed to the radio as Navey’s cousin, Elna Baker, leads you in an exploration of her Navey’s life and just how strange the full embodiment of a character can be. Towards the end of the segment, Elna tests her cousin to see if it’s true that she can’t do a simple cartwheel without wearing her tiger costume. It is. Outgoing and acrobatic in costume, Navey remains shy and awkward without it. That’s the type of examination into the power of character and mascots that I would expect Morris to be engaged in with his story about Mr. Met. Instead, Morris seems satisfied to ask softball questions about the “trouble” between Mass and the New York Mets organization and, instead of pursuing a deeper answer, retreats back into detached bemusement. 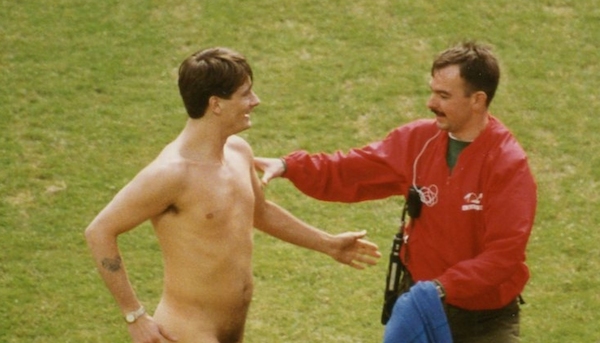 I’m not sure Errol Morris is a sports fan. As I watched the second and third installment of his six part series of short films on Grantland, it became increasingly clear to me that Morris is in this primarily for humor. The Heist and The Streaker,  like the first film in the series, The Subterranean Stadium focused exclusively on the strange behavior of non-athletes.

The Heist tells the story of four Duke men’s college basketball fans who sneak into the stadium of their arch-rivals, the North Carolina Tarheels, and steal a ceremonial jersey which was hanging on the rafters. There’s a tradition in American sports of honoring a great player by “retiring” his or her jersey. Once a jersey is retired, no one on that team can use that jersey number again. To symbolize this, a giant jersey is ceremonially hung from the rafters of the stadium. In this case, the number was 23 and the player was Michael Jordan. The four Duke fans, who remain nameless throughout the film and whose faces and voices are are obscured, concocted a plot to sneak into the stadium, steal the jersey, and then reveal it during a game between the two team, temporarily modified to support Duke instead of North Carolina. This simple, sophomoric prank goes smoothly, although the hoped for reveal never happens. It’s not, by itself, an extremely interesting subject for a short film but Morris clearly enjoys himself applying all of the tropes of a true-crime film to this nominally illegal act.

The hijinks continue in Morris’ third film in the It’s Not Crazy, It’s Sports series with The Streaker. Mark Roberts, the eponymous streaker who gives the film its name, is the world’s most famous streaker. He has streaked at every major sporting event and despite the fact that police forces and security companies all over the world know who he is, he manages to keep doing it. Now in his fifties, he’s still blithely unapologetic about what has become his life’s work. To my disappointment, Morris does not press him on the real potential danger of allowing or encouraging other people to run onto the field. I would have been fascinated to hear what Roberts said if confronted with questions about the times when a fan has run onto the court with violent intent, like the fan who stabbed tennis star Monica Seles in 1993. Instead, we get more high-spirited frivolity, including Roberts’ answer to the question, “would you want to die while streaking?”

I can’t say that I haven’t enjoyed these short films but I am mildly disappointed so far. Morris is such a wonderful film maker and interviewer but I feel his choice of topics is limiting the quality and meaning of these films. In my review of the first film, The Subterranean Stadium, I enjoyed how Morris used a light-hearted subject to examine deeper and more emotive aspects of real life. That second level was missing in these two films for me. What did you think?

Errol Morris is widely regarded as the premiere documentary filmmaker alive. This week, the sports and culture website Grantland has declared it to be “Errol Morris” week and is celebrating their own invented holiday by releasing a brand new Errol Morris short documentary each day. The first one, It’s Not Crazy, It’s Sports: ‘The Subterranean Stadium’, is a 22 minute slice of life focusing on a man whose love for electric football permeates the life of his wife, family, and friends. I plan to watch and review all of the films this week. For full disclosure, I am a big fan of both Grantland and Morris, so I’m likely to enjoy most of them. I loved this one.

The film begins by focusing on the game of electric football. Electric football is a table-top game invented in the late 1940s and still produced today. Although its prominence in the world of football make-believe and simulation has long been superseded by both fantasy football and football video games, electric football continues to have a passionate following and is still sold today. Since its invention, more than 40 million sets have been sold. Players set up miniature football players on an electrified field. When a switch is flipped, the field electrifies, and the players, whose bases serve as conductors (both for electricity and to provide direction for the player), take off. When a defender makes contact with the player with the ball, the play is over and the setup begins again. By now, of course, you might be thinking that you don’t actually feel that interested in the minutiae of an archaic sports simulation. You’re in luck. No matter what the subjects of Morris’ films are, what he cares about is people.

People are the true focus of this film and the results are spectacular. Morris’ films can be separated into two main groups: the ones where he takes a serious topic and dissects it (like wrongful conviction in The Thin Blue Line

, the Vietnam war in The Fog of War

) and the ones where he takes a frivolous or mundane topic and enlivens it (like small town life in Vernon, Florida

or animal lovers in Gates of Heaven

). This is definitely an example of the second. Love and humor are present in the thirty year tradition of gathering once a week in John DiCarlo’s basement to play electric football but as the documentary goes on, you begin to understand that there’s real pathos as well. Morris and whoever created the music for the film do a masterful job of allowing some of the tough realities of these people’s lives trickle into the film. You learn that DiCarlo is a Vietnam veteran who suffers from serious health problems due to his exposure to Agent Orange. The scene-stealing star of the film, a hot-blooded hot-dog vendor nicknamed Hotman (real name Peter Dietz) provides laughs and grins for most of the film and then the best line towards the end. When discussing his regret about never having children, he looks at the camera and says, “I had to play the hand I dealt myself.”

“I had to play the hand I dealt myself.” That line perfectly encapsulates this short film. The people who congregate in John DiCarlo’s Subterranean Stadium are realistic about their lives but also unrepentant. They know better than we do that winning an electric football simulation can only momentarily sooth the wounds of the lives they’ve lived, full of war and drugs and hardship and loss, but they’re unrepentant. The awkward beauty of the mangled card metaphor is that, had Dietz thought about it a little longer, he would have found that the perfect metaphor wasn’t playing cards with all its inherent randomness but electric football where you place the players where you want them and then sit back and watch the action unfold.