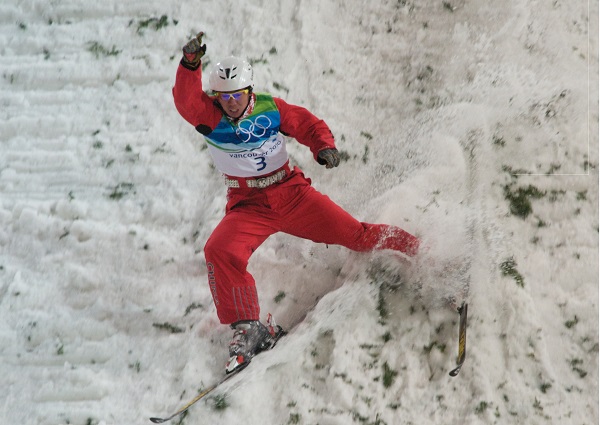 “Did she stick the landing?” is a question you normally associate with the Summer Olympics’ glory sport of gymnastics but it’s also the detail to watch in the Winter Olympics sport of freestyle skiing. Freestyle skiing is actually more like a loose conglomeration of related sports than it is a single sport. Two of its events, mogul skiing and ski cross are timed races. The other three, aerial skiing, half-pipe, and slopestyle are judged events. The thing that connects all five of these events, (and which should be obvious from the name of the umbrella sport,) is that they all involve skiers hurtling through the air. And, since we believe in cliches on this website, what goes up, must come down.

In the downhill ski racing, skiers try to minimize the amount of time they spend in the air. While in the air, a skier inevitably slows down compared to a skier on the ice. The lack of friction is far overshadowed by an increase in wind resistance. In freestyle skiing, jumping is part of the sport, and athletes in all five events need to stay in the air as long as possible to do the flips, twists, and somersaults that characterize their sports. Instead of optimizing their path to minimize their time in the air, freestyle skiers optimize their performance to minimize the time they spend in the transition between skiing and jumping.

A very astute viewer may be able to see this optimization process in a skier’s approach to a jump. I can’t. But I can see it in how a skier lands a jump. The very best freestyle skiers are able to go from twirling in the air to a perfect skiers posture (legs parallel, knees bent almost to a 90° angle, torso and arms angled forward) in a single smooth and very quick motion. In the racing events, this is important because it limits the loss of speed. In the judged events, it’s important most directly because it is something that judges look for. That’s the only thing to watch for in aerial skiing which only has one jump at a time. In half-pipe and slopestyle, since athletes perform several jumps in a row, it’s also important for the same reason as in the racing events — to maximize the amount of speed skiers are able to maintain or even gain between jumps.

So, as you watch glorious freestyle skiers fly through the air, watch for how quickly they are able to get back to skiing once they land!