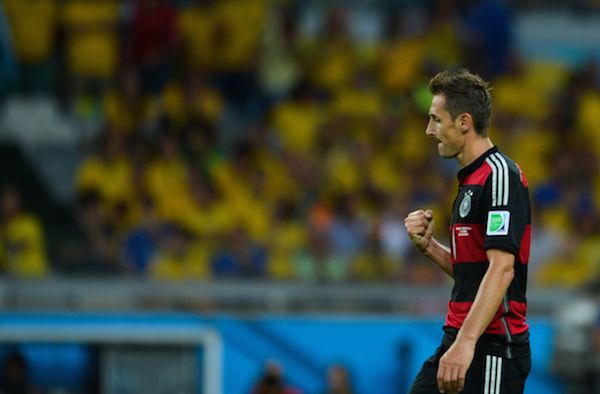 Miroslav Klose is a 37 year-old German soccer player of Polish descent. Derek Blackman was born in New Jersey but moved to North Carolina when he was four. He kept his early allegiances to the New York Jets and New York Yankees, added a love for the Chicago Bulls, and adopted UNC as his North Carolina college basketball team. He became a soccer fan recently, during the 2014 World Cup. Germany and specifically Klose jumped out at him. He became a fan, and the rest is history. We captured some of that history in this podcast. Enjoy!

On why he roots for Klose:

He took it upon himself to be a leader… He was always creating opportunities and always scoring goals.

To me, Klose will always be the GOAT (greatest of all time). Some poeple say, “Oh no, Lionel Messi is the GOAT, some people say Pele is the GOAT… but this is my generation and I never really paid much attention to Klose before i started watching the World Cup last year, but he always stands out because he’s the greatest.

Miroslav has a brother, Timm, who is 6’4″ and also plays soccer professionally.

On Klose telling a ref he scored a goal illegally with his hand:

When he said he scored a goal with his hand and told the ref about it, he was being modest. He didn’t want to take credit for a goal he didn’t score. I’m just going to tell the ref… so they might view me in a different light.

The one thing Derek would like a non-sports fan to know about sports or sports fans:

That sports unites all. Even if you don’t like sports, you can sit with someone who watches sports and you can ask them a question as a non-sports fan… like, “hey, why did they throw that flag” or in soccer, “why did the ref pull the yellow card.” And if you explain something to them, they might be actually interested in it.