Rhythmic Gymnastics and Trampoline are two distant branches on the family tree of gymnastics. One emphasizes beauty, the other bounciness! 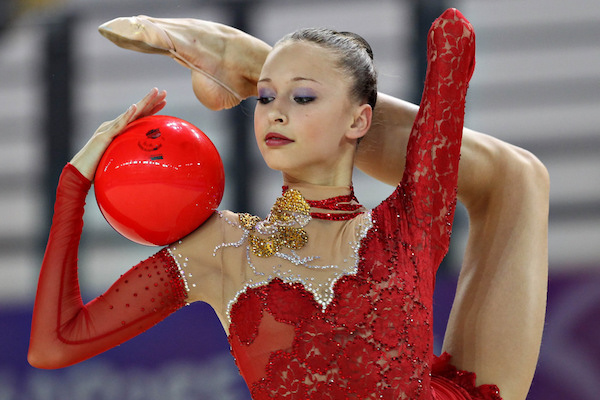 All About Rhythmic Gymnastics & Trampoline

Rhythmic Gymnastics and Trampoline are two often forgotten outgrowths of Olympic Gymnastics. If the story of regular (officially called Artistic Gymnastics) is one of an increasingly athletic arms race, Rhythmic Gymnastics is what would have happened to the sport if it had gone in the other direction. It rewards grace and beauty over strength and forceful athleticism. Trampoline goes in the other direction. It starts with the question, “what if we gave gymnasts a virtually infinite ability to jump” and goes from there.

How Does Rhythmic Gymnastics & Trampoline Work?

Rhythmic Gymnastics, like Artistic Gymnastics, has a number of apparatuses: hoops, ribbon, ball, and clubs. Each of these is a prop that can be used by rhythmic gymnasts in 75 or 90 second floor routines. Each apparatus has its own skills and each emphasizes a particular element of the gymnast’s movement. Rhythmic gymnasts are scored by two panels of judges, one assessing at the difficulty of the routine and one looking at how well executed each movement in the routine is. In Trampoline Gymnastics, gymnasts do routines that are limited to no more than ten jumps on a giant trampoline. Judges score the routines like Rhythmic Gymnastics, on difficulty and execution, but with an additional element of hang time. Trampoline competitors are rewarded for total time spent in the air, which can exceed 18 seconds!

Rhythmic gymnastics has a lot to recommend it to television viewers. These athletes use their bodies and their apparatuses together to create beautiful patterns. They’re also amazing athletes in their own right. You can easily get distracted by the flowing ribbon, but if you keep your eye on the gymnast, you’ll see strength and flexibility being tested to its full extent — every bit as much as in other events. Watching trampoline is like watching diving but without all that boring setup between dives. Imagine ten consecutive dives with all of their tucks, rolls, swivels, and summersaults!

Rhythmic Gymnastics has a team and an individual event. Trampoline has men’s and women’s events.

How Dangerous is Rhythmic Gymnastics & Trampoline?

Safe. Trampolines are notoriously dangerous when used by laypeople, usually children or teenagers. At the Olympic level, they’re much safer than that. There aren’t any faulty springs and the trampoliners are not going to go flying into the shrubs. Rhythmic gymnastics is also very safe. Not that I’d try to do any of those moves, but still.

What’s the State of Gender Equality in Rhythmic Gymnastics & Trampoline?

Read more about these events on the official Rio Olympics site for Trampoline and Rhythmic Gymnastics. 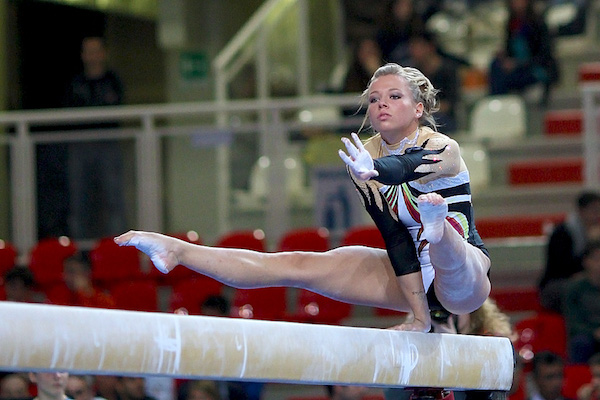 Gymnastics is the Summer Olympic games’ answer to the Winter Olympics’ obsession with figure skating. It’s a popular event that launches (mostly) young women into national stardom through a mixture of athleticism, artistry, and shiny costumes. Even more than with figure skating though, there’s a depth to Gymnastics beyond the gold and glitter.

How Does Gymnastics Work?

Gymnastics demands that its practitioners demonstrate a high level of artistry while doing insanely difficult physical feats. All of gymnastic is scored by a panel of nine judges who watch everything and basically decide who made the hardest thing look easiest. Gymnastics is a prop-based medium. There are eight different apparatuses on which gymnasts perform. The floor is the most minimalist of the apparatuses. It’s a 12 meter square mat that gymnasts perform 70 or 90 second tumbling routines on. In the vault, gymnasts sprint down a narrow mat before launching themselves into the air to bounce off of a solid chest-high structure, spin, twist, and tumble in the air, and then land on their feet. The pommel horse is a similar structure to the vault with the addition of two raised handles. Instead of leaping off of it, gymnasts hop on top of it and do a routine of tricks, all while touching the pommel horse only with their hands. The rings are like an inverted version of the pommel horse, except there are only two handles — no horse at all — and they are suspended from the ceiling by cords whose strength is tested by the gymnasts as they do tricks on them. In this discipline, watch for moves that pause — any pause requires immense strength from a gymnast in mid-air. The balance beam is a four-inch wide elevated strip upon which gymnasts do wildly difficult tricks. Imagine the fearlessness (and practice!) one needs to flip backwards and plan to land on something only four inches wide. The remaining four apparatuses are all variatons of thin, rounded bars. There is a single bar, two parallel bars, and two bars of different heights called uneven bars. On all of these, gymnasts plan routines that have them speeding up as they rotate a bar, only to release the bar, tumble through the air, and catch a bar again before hitting the ground. It’s pretty wild!

NBC, the channel that’s televised the Olympics in the United States for as long as I can remember, has made an art out of its gymnastics coverage. Each gymnast seems to have an equally compelling personal back story. You get to know them and then, of course, you want them to succeed in their routines and events. This is kind of the pattern for all Olympic coverage, but it’s most obvious with the glittery gymnastics events, especially the women’s events. There’s nothing wrong with watching gymnastics this way, but if you want to concentrate on the more purely athletic aspects of the sport, there’s a lot there as well. Gymnasts pack an enormous amount of strength into bodies sculpted for elegance and flexibility. Gymnastics events are won by fractions of an inch. An inch over or under rotated during a tumble lead to a wobble on a landing and a deduction of points by a judge. An inch miss on the balance beam or one of the bar apparatuses can be equally disastrous. Plus, there is so much variety in gymnastics, it never gets boring.

How Dangerous is Gymnastics?

Every Olympic junkie remembers Kerry Strug finishing her routine on an injured ankle to win an Olympic gold for her and her teammates. That is an exception, but it’s one that proves the rule. Don’t be fooled by how beautifully gymnasts complete their routines most of the time. What they are doing is amazingly precise and the consequences for any error can be big. Gymnastics is dangerous!

What’s the State of Gender Equality in Gymnastics?

Gymnastics is a confusing sport when it comes to gender equality. Men perform on more and different apparatuses than women. Men do the Vault, Floor, Pommel Horse, Rings, and Parallel Bars, while women do the Vault, Floor, Uneven Bars, and Balance Beam. You can argue that the women’s apparatuses are better, but they’re still different and fewer than the men’s. They also emphasize raw strength less than the men’s apparatuses. On the other hand, the women are much bigger stars than the men, although there’s a vague prurience in the coverage of women gymnasts that takes away from any honest celebration of this fact. Gymnastics is a messy world gender-wise.

Read more about gymnastics on the official Rio Olympics site.