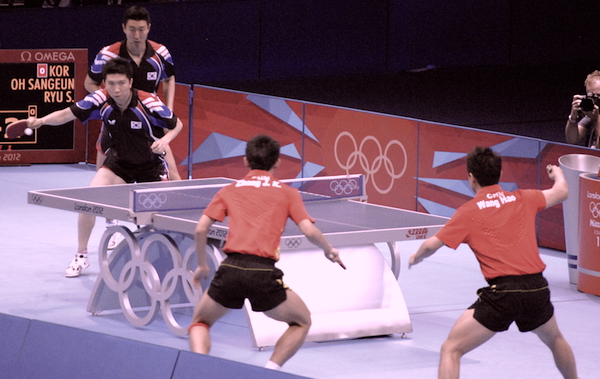 Why would the US table tennis competitor, who just lost to a woman from Korea, hand her paddle to the official at the end of the match? Any ideas?

Do you remember the Deflategate controversy in football from a couple of years ago? The National Football League discovered (although this is still widely debated, especially in New England) that the New England Patriots and their quarterback Tom Brady had intentionally been playing with balls on offense that had less air in them that was allowed. In other words, they had broken the rules by modifying the equipment they were playing with. This story was novel for a bunch of reasons, many of them involving particular narratives within football that we don’t need to go back into, but one of them was that the NFL seemed to be punishing what, within football was seen as a minor infraction, with a major penalty. Well, in table tennis, illegal modifying your equipment is not seen as a minor issue. That’s probably why the table tennis Olympian you were watching handed her racket (they’re officially called racket not paddles) to the umpire after the game.

Based on a brief reading of the official International Table Tennis Federation’s Handbook for Match Officials, racket cheating is a major concern. Here are just a selection of the characteristics of a racket that the umpire is concerned with:

The rule that is most likely relevant to what you saw, however, is one that legislates how and when rackets are tested for illegal tampering by players.

“In major competitions rackets are tested for the presence of banned solvents, normally after the matches. For the quarter and semi-finals as well as for the finals, the players may be given the choice of a pre-match or post-match test, so that they can decide between not having the use of their racket between the test and the start of the match and the disqualification if a post-match test proves positive.”

My guess is that the American Olympian you saw handing her racket to the umpire after the match was over had opted for a post-match test and the umpire was going to facilitate that.

Another option, although I think it’s a less likely one, is that the player had damaged her primary racket and all of her backup ones. In that case, a the match umpire “must report to the referee, who will decide how a second replacement is to be provided.”

Amazing what you can learn from rulebooks!