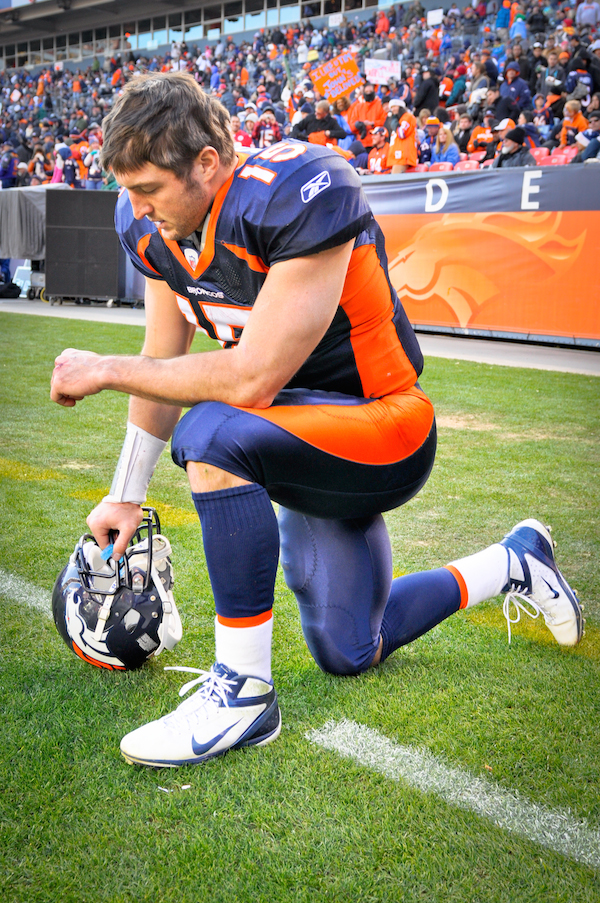 I saw that a couple of football players were making fun of Tim Tebow for praying. What’s up with that? Do you think it’s fair to mock Tim Tebow for his religion?

It’s a close call, but I do think it’s okay to mock Tim Tebow’s religiosity. For those of you who aren’t familiar with the story, here’s a little background. Tim Tebow is a Quarterback, currently playing for the Denver Broncos in the NFL, who won two National Championships in college with the University of Florida football team. In college he became incredibly famous, mostly for his football playing prowess, but also for his religious beliefs which he was unabashedly public about. In 2009 a reporter asked him if he was a virgin and he said he was. He also showed some humor, saying, “I think you’re stunned right now,” Tebow joked with reporters after revealing his virginity. “You can’t even ask a question. … I was ready for that question, but I don’t think ya’ll were.” In 2010, Tebow publicized his beliefs further by participating in a Super Bowl commercial for Focus On the Family which (between the lines, as it were) promoted an anti-abortion message by celebrating Tebow’s mom’s decision to continue her pregnancy despite being advised by a doctor not to. As Brian Phillips writes in his well-worth reading article on Tebow on Grantland, “A trillion words have been written about this already, but suffice it to say that if you see him as the avatar of muscular Christianity in football, you know that in his bland, smiling, placidly self-confident way, he sees himself that way, too.”

These days, Tebow has somehow become even more polarizing as he has emerged in mid-season as the starting quarterback for the Denver Broncos. Two weekends ago he started his first game this season against the Miami Dolphins. The Broncos were down 15-0 at half-time but ended up coming back to win the game in overtime. When they won, cameras caught Tebow kneeling in prayer as his teammates celebrated around him. This act has become a meme over the last week, leading to a website selling shirts… and to any number of photos and videos of people performing their own acts of “Tebowing.”

This past Sunday’s game did not go quite so well for the Broncos or for Tebow. The Broncos lost 45 to 10 to the Detroit Lions and Tebow played badly, throwing one interception and fumbling three times. The Lions were not satisfied just by winning, they also picked a couple choice moments to mock Tebow by adopting his now famous praying pose after sacking him or scoring a touchdown.

To your question — which was also asked in this way in the New York Times’ football blog today:

Is it all in good fun?  Tebow invites scrutiny with the very public nature of his religious beliefs, his evangelistic side. But let’s imagine that a player displayed a Muslim religious ritual or one based on Hinduism? Would it be fair to mock those displays as well? If not, why is it fair game for Tebow?

I say yes, it is fair to mock Tebow for his religious displays because Tebow, through his actions has made them part of the public domain. It’s one thing to claim that dropping to his knees in passionate prayer is not a public act even if it is on a playing field with 20+ cameras, but it’s another to claim that someone who used to list bible verses on his eye-black and who has publicly endorsed religious/cultural lobbies it treating his own religious as a private matter. Frankly, I don’t think the players on the Lions were mocking Tim Tebow for his religion, I think they were mocking a sophomore player, who they think is not very good at his craft, for what they consider a self-aggrandizing and maybe just a little prematurely self-congratulatory celebration.

What do you think?
Ezra Fischer