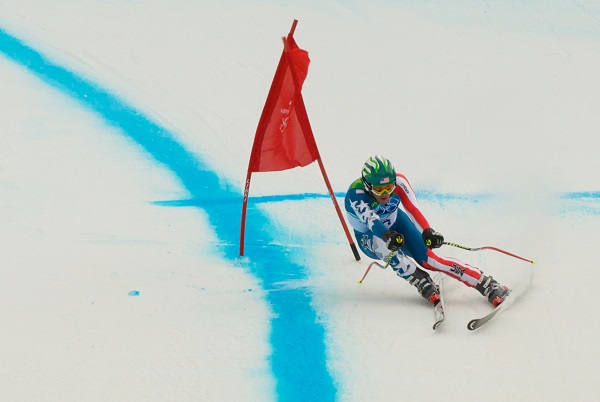 Alpine Skiing, consists of four main events in the Olympics: Downhill, Super-G, Giant Slalom, and Slalom. Each discipline is similar in concept to the others. The winner is the athlete who can make it down the mountain through a course designated by some type of flag in the least amount of time. The events are differentiated mainly by how steep the slope is and how tightly winding the designated course is. No matter which event you are watching, there is a single detail that you can watch and comment on which will make you sound smart during the Winter Olympics. In Alpine Skiing, this is how quickly a skier makes it through the top of the course.

This post is one in a series of posts about the Winter Olympics that arm the casual viewer with a single tactic to sound smart while watching each event. Focusing on these details may also make your viewing experience more enjoyable

In Alpine Skiing, like some other Winter Olympics sports – Bobsled, Luge, and Skeleton, as well as Long Track Speed Skating – a running clock tracks each athlete’s progress throughout the race. Only at certain spots on the course, however, does the racer’s time get compared to all of the other competitors’ times before her. These moments are called “splits.” The trick in Alpine Skiing is to focus on the first split which measures how fast a skier has gotten through the highest part of the course.

Time on the first split is highly correlated to overall time on the course and therefore, who is going to win. At first glance, the top part of the course may not seem like the most important or the most exciting. It’s usually not the most challenging or steepest part of the course. It doesn’t have any of the most dangerous corners where racers, especially in the Downhill event can wipe out spectacularly. So, why does it give us such a strong clue about who is going to win?

Imagine that, instead of a skier with agency, Alpine Skiing events were actually run by marbles or some other inanimate object that the Olympic Athletes simply placed at the start of the course and gave a tiny push. The exact route the marbles took at the top of the course would almost completely define how the marble completed the rest of its trip to the bottom. A little too far to the right at the top and you can imagine a marble bouncing way off to the side and not being able to stay within the defined course. Skiers, unlike marbles, are able to make adjustments part of the way down the mountain, but these adjustments are limited and costly. No matter how strong a skier is, their ability to course correct is limited by the incredible force they generate going downhill at 30 to 60+ miles per hour. Sometimes a skier will go off course or crash because they took the turn three turns ago a few inches too far to the right and the cumulative effects of this mistake are too difficult to undo. If they are able to course correct, they will do it at a cost – any side-to-side correction is going to slow them down, something they can’t afford to do and have a chance at winning. So, the precise route or line a skier takes at the top of the course has an outsized impact on how fast they will be able to go in the middle and bottom of the course.

There is another slightly cynical way of looking at the top of the course. The first split is the first time each skier is compared to all the other skiers. The better skiers will probably be going faster at every split throughout the course. Every split necessarily includes the first one! So, if you watch and comment on the first split, you will seem clairvoyant!

Thanks for reading and enjoy the Games,
Ezra Fischer 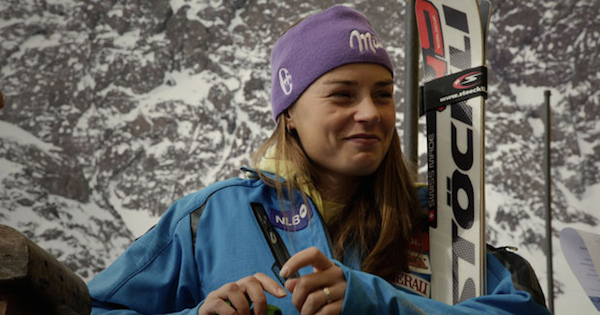 I watched an hour of the Women’s Downhill skiing race at the Alpine World Championships today. It was enjoyable and exciting but exactly why this was so, was not totally clear to me. As I watched, I started listing some of the reasons why it shouldn’t be exciting:

So, why would I keep watching? I guess there were a few reasons for that as well:

For those of you who are interested in watching some skiing, here’s a full TV schedule of the 2015 Alpine World Championships.

Injuries are a sad reality of sports. As athletes, even amateur ones, we know they’re coming and we just hope they’re not too painful or debilitating. As fans, we are transfixed at the edge of our seats whenever someone on the teams we root for goes down in a clump, grabbing their ankle or knee. As fantasy sports owners, we’re a step removed from the injuries and they transform into simple tactical obstacles that need to be overcome.

One of my favorite parts of writing Dear Sports Fan is reading other great writers cover sports in a way that’s accessible and compelling for the whole spectrum from super-fans to lay people. Here are selections from the best articles of the last week on the subject of injuries:

This article subverts everything we think about athletic injuries by focusing on the organ donor whose tendon was put into NFL quarterback Carson Palmer’s knee in 2005 and the emotional impact of this on her family and Palmer himself. It’s a brilliant article not least because of its restatement of the age old grandfather’s ax paradox. Can a donor live on through her donee’s achievements? What happens when her tissue is replaced?

by David Fleming for ESPN

De Rossi’s final gesture of organ and tissue donation would eventually save or improve the lives of more than 50 people. One of them just happened to be a Pro Bowl quarterback in need of a new knee. “A cadaver didn’t save Carson’s career, that was Julie, a person called Julie,” says Dorothy Hyde. “There was absolutely no one else on this planet like her.”

Twenty-two months after she was killed,  De Rossi’s Achilles tendon became part of Palmer’s knee. Within five months, Palmer was already jogging. He was back under center for the Bengals 2006 season opener without missing a single game. “It’s a little eerie, but it’s also pretty amazing,” Palmer said in an interview just two days before he re-tore his ACL. “Dorothy’s daughter lives on; a part of her is still moving and running and cutting. All the things my knee is doing, she’s doing too.”

His latest injury has severed his physical link to De Rossi… Yet the deeper connection between Palmer and De Rossi remains intact. Shortly after learning about Julie while recuperating from his 2006 surgery in California, Palmer asked his wife, Shaelyn, to drive him to the DMV. Eight years later, when he reported to a hospital for his latest surgery, he would have been asked to provide identification and any pertinent medical information. Palmer would have reflexively reached into his wallet, pulled out his driver’s license and handed it to a hospital administrator.

On the lower-left-hand corner of the ID, just next to Palmer’s smiling, tan face, is a tiny dark-pink circle with a single word written in small, thick black letters.

Questionable to Start is a great blog I discovered this week on my voyages around the internet. Its creator started with a simple observation that mainstream media’s reporting on injuries in the NFL was not based on historic data. So, he decided to collect the data, build a database, and now he writes about NFL injuries from an informed perspective unavailable to most. This article is a response to some criticism for a debunking statement Questionable to Start made about quarterback Nick Foles’ broken collar-bone — a debunking statement that turned out to have been correct.

Are all injuries really different?

by Craig Zumsteg for his blog Questionable to Start

Yes, all injuries are absolutely different. While two players might both have collarbone fractures, those fractures are often in different locations. Different levels of stress and mechanics caused those two injuries, so the extent of the injury is usually different as well. Different players heal and respond to treatment in different ways.

I have examples of two recent quarterbacks who suffered fractures to their left, non-throwing, collarbone. One returned after missing seven weeks. The other was close to returning around eight weeks, then suffered a setback and ended up missing the ten games before the season was over. Yes, I admit this is a dangerously small sample size.

With those two examples in mind, something rings false about any estimate that includes four weeks as a possibility. Yes, I guess that’s physically and medically possible, but it is not something we’ve seen from a quarterback… In order for me to believe that a four-week return is possible for Foles, I would like to understand the specifics of his injury. Why is Foles injury half as crippling as the ones Aaron Rodgers or Tony Romo suffered? It is entirely possible that Foles has a smaller fracture. Or that his fracture is at a location more likely to heal quickly. Or some combo of the two. But, without those specific details, I think that a historical comparison approach is the best tool we have available.

What is we could prevent injuries before they happened? We would have fewer beautiful stories like our first story today and less need for intelligent statistical coverage of injuries like in our second. Still, I think we can all agree that fewer injuries is a good thing. This article is about a revolutionary attempt to prevent injuries in downhill skiing — one of the most dangerous sports out there.

by the Associated Press in The New York Times

Perhaps if Lindsey Vonn had a big cushy air bag to fall on when she tore two ligaments in her right knee she wouldn’t have missed the Sochi Olympics… Looking back, it’s nearly impossible to calculate what effect — if any — an air bag would have had in those crashes. But with a radical air bag system being approved for use in World Cup and lower level races beginning in January, Alpine skiing could get a lot safer.

The system — which entails putting an air bag in the neck area of athletes’ back protectors — was developed by Italian manufacturer Dainese in coordination with the FIS. It inflates when skiers lose control and are about to crash.