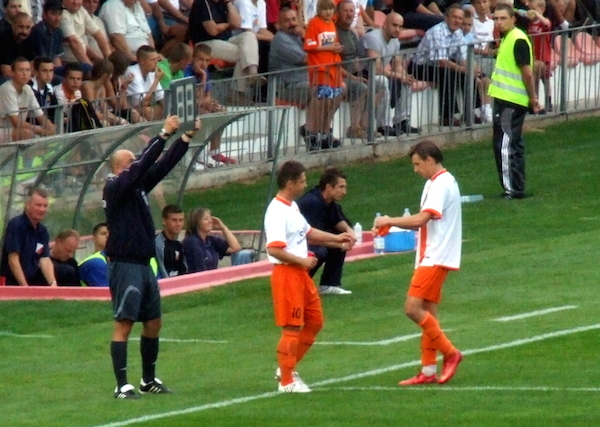 How do substitutions work in soccer? I have been watching a bunch of English Premier League soccer on TV and it seems like teams often make a bunch of substitutions right at the end of the game. I don’t know why they would do that — the game is basically over.

Great question! A substitution is when a player on the field is replaced by a player who has been sitting on the bench. Substitutions are a big part of the tactics of most of the sports we’re used to watching on TV. Football teams substitute players on almost every play. In basketball, there’s an official award given each year to the best substitute called the Sixth Man of the Year Award. Baseball substitutions are notoriously tactic-y, especially in the National League where teams substitute hitters in order to avoid having their pitcher at bat. Substitutions in soccer are less obvious tactically because of soccer’s fluidity of play and the restrictive nature of the rules that pertain to substitutions but they are important nonetheless. We’ll take a quick run through how substitutions work, why and how teams use them, as well as looking backwards and forwards through time to the history and potential future of substitutions in soccer.

How do Substitutions Work in Soccer?

A soccer team can choose to substitute a new player for one who has been playing at any point during a game. When the coach decides to make a substitution, he or she tells an official who hangs out near the team benches, and that official signals the referee. At the next dead ball (a stop in play that occurs when the ball goes out-of-bounds for a throw-in or goal-kick but not for a corner kick or a foul) the ref stops the game and allows the substitution to be made. There are two somewhat picky rules about this process. The substitute is supposed to wait at the side of the field at exactly the half-way line until the player who is being substituted for leaves the field completely. Refs are allowed to discipline (by giving yellow or red cards) players who violate these rules…

[begin detour] I never understood these rules when I played soccer — I thought they were an arbitrary way for the referee to establish superiority over the players. In researching this post though, I came across a funny thing in the Wikipedia article on substitutions in soccer:

So, that’s curious — if the ref can’t force a player to be substituted, then it makes sense to make the steps of substitution so formal and obvious. That way the ref can at least quickly identify when a player refuses to be substituted. In any event, this basically never happens, I just thought it was interesting. [end detour]

Two more rules make substitutions more interesting in soccer. First, a player who has been substituted cannot, once she or he has left the field, return to play. Not in the next half, not in overtime, not for a shootout. This is different from football and basketball but the same as baseball. Second, substitutions are very limited in number. At top competitive levels like the World Cup, British Premier League, Bundisliga, La Liga, even MLS, teams are only allowed three substitutions per game. There are no exceptions to this rule. If a team has used all three of their subs and a player on their team gets injured badly enough to have to leave the game, too bad, the team plays down one player. If a team has used all their subs and their goalie gets kicked out of the game, too bad, they cannot put a new goalie in although they can designate one of the regular players as a goalie and give her gloves and a different colored shirt.

Why and how do soccer teams use substitutions?

There are three main tactical reasons for a soccer team to make a substitution: removing an under-performing or injured player, shifting the team to be more offensive or defensive, or wasting time. Let’s start with the third, since that was the tactic you identified in your question. Substitutions take time to perform. The player being substituted for has to run (or walk, or saunter, or limp,) from wherever they are on the field to where the substitute is waiting to come on. A team that is winning that has substitutes left to use near the end of the game may choose to substitute mostly just to waste the time it takes to execute the substitution. When this is the intent of the substitution, you’ll see the player coming off the field move as slowly as he or she can without attracting the ire of the ref. He may wave at the crowd or clap in appreciation. She might slow down to hug a teammate or give some likely unnecessary instructions. This is a little cynical and it shouldn’t actually work since the ref keeps the official time and can simply pause his or her watch to counter-act the hijinks, but it’s still commonly attempted. The second tactic is making a substitution to shift the stance of the team to be more aggressive or more defensive. Based on the situation, a team might choose to play it safe by replacing an attacking player with a defensive one or gamble by taking a defender off the field and putting on an attacking striker. Other substitutions are made to replace a player who isn’t playing up to snuff based on an injury or just general malaise. Because substitutions are so limited, being forced to make one for injury or bad play is perceived as a bad thing for that team.

What is the history and future of substitutions?

Another thing I was surprised to learn from the Wikipedia article about substitutions is how recent of an innovation it is in soccer. Soccer has been around in one form or another for hundreds of years in Europe and possibly elsewhere before it was formalized in the mid 1800s in England. For close to a hundred years after the soccer rules were written up in 1863, substitutes were simply people who played in a game when some players on a team didn’t show up — you know, like they got stuck in a bad carriage-jam on the interstate. It wasn’t until the 1950s that substitutes were allowed during a game. Before then, an injured player was expected to either play on or put their team at a numerical disadvantage. The number of subs slowly increased until in 1995 when the rules were changed to allow for the current three.

We’re likely to see another change coming soon to modify the game to handle head-injuries better. One problem with limited the number of substitutes is that it gives an even greater incentive to players and teams to play through injuries, even potentially dangerous ones. As we learn more about concussions, we know that they are important to test for as soon as possible and that a player who suffers a second blow to the head after a concussion is in much greater danger than she was after the first injury. The problem with the current rules is that players don’t want to leave the field to be tested, much less to be substituted. We saw this a few times during the last World Cup when there were a couple of high-profile incidents with clearly dazed players playing for some time before eventually being removed. No one knows exactly how soccer will evolve, but something has to be done, and it will probably modify the way substitutions work.