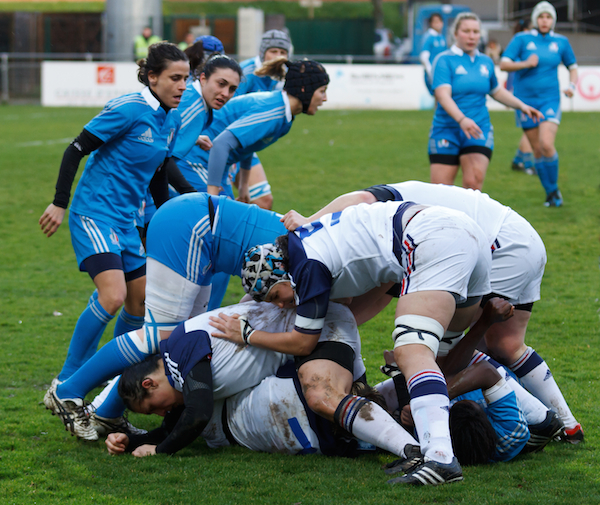 What happens in rugby union when someone gets tackled? Can they get up and keep running? Do the tackler and the tackled player fight for the ball? What can their teammates do to help?

For people who didn’t grow up with rugby, myself included, it’s often helpful to think about the sport as a mixture of soccer and football. Your question gets at one of the essential inflection points where rugby has some elements of soccer and some of football. In soccer, play is not stopped, nor altered in any significant way by a tackle, as long as it’s legal. In football, a tackle brings play to a halt. The whistle blows, the ball is dead, and everyone has to get up, dust themselves off, and receive a new set of instructions before starting the next play. In rugby, a tackle changes the rules of engagement for how players can interact with each other and the ball, but it doesn’t stop the flow of play all together. It’s a blend of soccer and football.

A tackle in rugby happens when the player with the ball is forced to the ground by an opposing player. The ball-carriers knee or butt must touch the ground while she is in the clutch of an opposing player. Once that happens, the phase of play shifts, and the game is now guided by a set of rules which only apply to this particular situation.

Passing the ball out of a tackle to a teammate is the ideal scenario for the tackled player, but to do so legally, it’s got to happen quickly. As soon as an opposing player comes to try to get the ball, if the tackled player is still holding on to it, a foul will be called against him. In reality, tackled players often have to simply drop the ball, hopefully in the direction of their teammates. What we’re left with, is two players on the ground, neither of whom can pick up the ball and run with it again until they get off the ground and away from the play. Teammates of the tackler and tackled player may get involved to try to win back possession of the ball as long as they follow these rules:

What often happens, is that the ball remains relatively still while the two sides try to push their opponents backward so that their teammate behind the mass of pushing players has an easier time grabbing the ball. In this way, the ruck resembles the offensive and defensive lines in football engaging at the start of a play. It’s a test of strength for territorial gain. In the case of a rugby ruck, possession of the ball is also at stake.

Watch the first minute of this video. Players from the New Zealand team get tackled over and over again, and each time, their team wins possession of the ball in the resulting ruck. Note how players on both sides have to circle back behind the ruck in order to enter it.