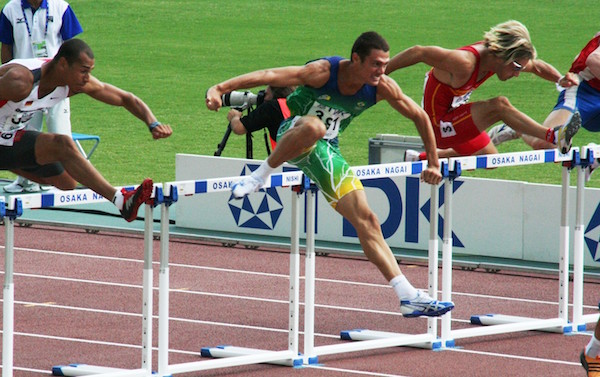 All About Track & Field

Track and field is such a wide-ranging set of disciplines with so many different competitions that it could be a multi-sport event like the Olympics just itself. From running fast to running far to jumping to throwing things, track and field has a little bit of everything. You can divide the track and field events into any number of categories. I came up with five that I like: sprints, long distance running, jumping, throwing and combined.

How Does Track & Field Work?

Sprints are relatively simple events. Sprinters line up and go as fast as they can until they hit the finish line. Because sprints are so short, how well a runner starts is very important. As a result, there are a lot of false starts — when a runner begins moving before the starting gun is fired (no bullets) — and these can be frustrating for viewers and runners alike. Within this category are the only team events in track & field — the relay race. During relays, a team of four runners each run a distance consecutively with a baton that must be passed from one to the next. Whichever team finishes first, wins.

From around 800 meters (two laps around a starting track) to 10,000 meters (25 laps) to marathon distances (26.2 miles) and above (yes, there’s a race longer than a marathon!), races become much more tactical. The winning strategy is not just to start running as fast as you can for as long as you can. Instead, runners carefully watch each other and decide what to do. Runners who know that, all things being equal, they can run the last half lap faster than anyone else in the race are content to see the race go slowly at the start. Runners who don’t have that final kick, as it’s called, want to push the pace early, hoping to tire out the better finishers.

How awesomely simple do the Olympics seem sometime? How far can you jump? How high can you jump? What if we give you a giant stick to launch yourself off of? What about if you have to jump three times in a row? Who invented this and why do we like it so much?

There may be no better connection between the modern Olympics and the ancient Olympics than the track and field throwing events. Wrestling may be the sport most associated with the connection between the two, but for my money, there’s more in common with throwing events and actual ancient warfare even than wrestling. And, after all, that’s what the Olympics have been for so much of their history — warfare by other means. Throwing events are judged purely by distance, although there are strict requirements for how to throw the apparatus in each event and these rules lead to illegal throws quite often.

There are two types of combined track and field events. Some are multi-discipline events like the Heptathlon and Decathlon, where athletes compete in seven or ten different sports. Others are single events which combine elements of the previous four categories. Hurdling races are sprints or medium distance track races during which runners must leap over a series of evenly placed barriers. The steeplechase is a more novel race where runners must navigate a variety of obstacles including some involving water. Fun!

Each event and each category of events has its own potential appeal. Sprinting is a pure thrill — it’s no coincidence that these athletes are billed as the fastest people on earth. Sprints are bite-sized highly rewarding snacks. Middle and long distance races are more tactically interesting to watch. There’s sustained suspense throughout the race and the sprint at the end, when it comes, is more exciting because of the time you’ve invested in watching the event. Jumping events are amazing in part because they are so highly specialized. It’s rare to see a high jumper also do the long jump or the triple jump. Each jumping event has its own technique and rewards its own body type. Talking about variations in body types, that’s one of the main joys of watching the throwing events. It seems as if the object these athletes throw has some type of formative power over their bodies. People who put the shot (shot putters) are giant berserker-like humans while javelin throwers are shaped more sleekly, like the javelins themselves. The multi-discipline events are cool for exactly the opposite reason. What kind of person can do all seven or ten of these things well? What should their body look like? Finally, the hurdling and steeplechase events are amazing because they require such precision. If a hurdler gets even a split second off, they’ll hit one hurdle and then the next. The margin of error is so small and recovering from a mistake is almost impossible.

What do we get to throw? There are four objects. The discus is like a frisbee but heavier and smaller. The javelin is basically a spear. The shot put is a freaking heavy boulder. Finally, the hammer, the least well known of the throwing events, is a metal ball on the end of a wire. WHOA!

The Heptathlon and Pentathlon are the two multi-sport events. There are hurdling events at distances of 100, 110, and 400 meters and a 3,000 meter steeplechase.

How Dangerous is Track & Field?

There have been some famous track and field injuries. These happen most frequently in the sprinting events, where athletes move so explosively that their muscles sometimes explode or in the combined events where it is possible to mistime a leap and smash into an obstacle. All in all, most of the Olympic track and field athletes will make it out unscathed.

What’s the State of Gender Equality in Track & Field?

This is almost too big of a question. Taken all together, track & field is by far the biggest sport in the Olympics. There are 141 gold medals to be had! The only glaringly messed up thing about track & field comes from distance and quantity. In hurdling, women have a 100 meter event and men have a 110 meter one. What, that last 10 meters was going to kill someone? Men have a 50 km race walk in addition to their 20 km one whereas women only have the 20 km. In the multi-discipline events, men get ten sports to play with while women only compete in seven.

Bookmark the full Olympics schedule from NBC. Track & Field is from Friday, August 12 to Sunday, August 21.