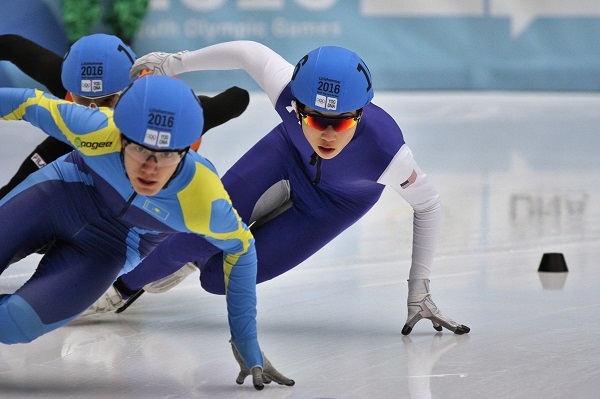 There are two ways of passing an opposing skater or group of skaters: the outside pass and the inside pass. The key to both of these passes is that speed skaters are able to generate the most power while turning. The New York Times has an amazing video feature that explains this better than I ever could. Skaters are able to pick up a lot of speed on turns, but only careful planning will allow them to use that speed to pass a skater ahead of them.

An inside pass is set up at the start of a single turn when a short track speed skater ironically enters the turn just on the outside shoulder of the skater ahead of them. They continue on a wider turn than the person ahead of them for the first half of the turn. This allows them to slingshot themselves back from the turn a hair of a second earlier than their opponent and exit the turn on the inside of where the leading skater does. Now they are going at least as fast as their opponent and, because they are now on the inside of the track, with a shorter distance to go to the next turn. By the time they get there, they will be in the lead.

A speed skater who pulls off an inside pass looks like she enters a turn behind another skater, goes farther outside during the turn, but then magically zips to the inside on the straightaway and enters the next turn with the lead. It looks like the pass happens on the straight part of the course, but it’s due to a choice she made entering the previous turn.

An outside pass takes even more advance planning than an inside pass because it happens over almost an entire circuit of a course. In the second half of one turn, a skater begins to pick up speed by exiting the turn a bit wider than the skaters in front of her. All through the straightaway, she remains on the outside, picking up speed. When she enters the second turn of this tactic, she enters to the outside of her peers but instead of cutting across, like on an inside turn, she stays on the outside the entire time, taking a wider turn than anyone else.

Although this means she is taking a longer path than any of her competitors, it can work. Remember that the act of turning allows for more acceleration than going straight. So, lengthening a full turn means more time for speeding up. Still, this is an exhausting choice. A skater who attempts an outside pass and doesn’t make it may be too tired to try again on the following lap.

Okay — I got a little deep in the weeds in this post. If you kept up with me, you’re brave! If you didn’t, the tl;dr is this: all passing in short track speed skating is set up by tactical choices made during the turn or two turns before the pass actually happens. If you watch to see how skaters enter a turn relative to the person in front of them (inside, outside, or straight behind) and how they exit the turn (inside, outside, or straight behind), you can predict whether they will be able to pass them and on which side!