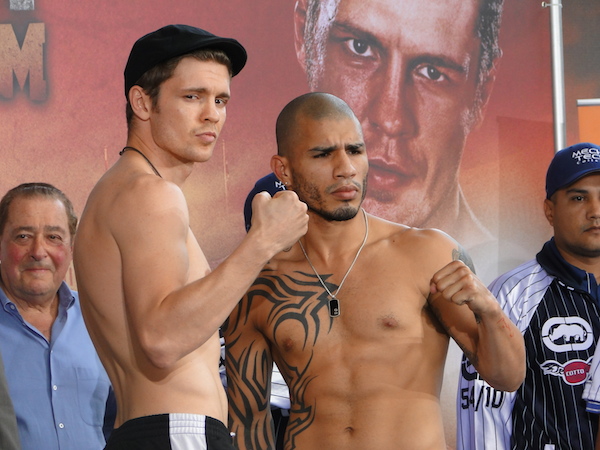 The phrase “tale of the tape” refers to making an objective comparison, particularly between two combatants. It comes from the sport of boxing where fighters are measured and weighed before a fight.

The pre-fight measurement has an important function but it also has its share of pageantry. To make boxing reasonably fair, it is organized into weight classes. For example, the famous fight between Sugar Ray Leonard and Thomas Hearns in 1981 was fought in the welterweight category. Both fighters had to be less than 147 pounds and more than 140 pounds during the weigh-in, which is usually the night before the fight. For a professional fight, the minimum weight is usually waived, but for amateurs, it’s an important safety element. Why the obsession with weight? Assuming that most boxers are not flabby, weight translates almost directly from muscle and height into punching power. The heavyweight class, the most traditionally prestigious weight class, has no maximum weight, only a minimum of 200 pounds, and even that isn’t enforced. So why do heavyweight fights still have weigh-ins the day before? Part of the answer is that the weigh in has become an important part of hyping or developing interest for the fight. The boxers pose for promotional photos with eyes locked on each other and fists cocked. Often trash talk is exchanged. Sometimes they even come to blows, although that’s usually put to an end quickly. The other reason is that the boxers’ weight, height, and reach are important factors for people who are betting on the fight. Reach, for example, or wingspan, as it would be referred to in a non-boxing context, is important because one fighter being able to punch the other from a distance at which they cannot be punched back is a big advantage.

The word, “tape,” in the phrase, “tale of the tape” suggests that reach or height were the first measurement being referred to. After all, what else do you measure with a measuring tape? Over time, the phrase has expanded, not just to include weight, but also other semi-objective measurements like a fighter’s previous record, what championship belts they possess, as well as biographical information like where they are from. In this context, it combines making an objective comparison with simply describing the fighter. That’s likely the sense in which Rachael Maddow was using the phrase. Did she do a comparison of two candidates which included objective information about their positions as well as stories about their past?

Now that the excitement of the World Cup is beginning to die down, it’s time to empty my inbox of some amazing non-World Cup articles from the past couple weeks. Our first two articles are serious journalism about how sports can be an enormously positive part of living in restrictive environments. Our second two articles are lighter fare, concerned with the junction of sports and words. Enjoy all four of them.

Thriving in a Barren Land

by Jere Longman for the New York Times

One of the reasons why soccer is the world’s most popular sport is that it’s so universally easy to play. All you need is a field, a ball, and some friends/opponents. But what if you live in the Arctic and there is no grass, only tundra? And traveling so expensive that you can only reasonably find opponents once a year? Well, you’re going to have to improvise…

Assis, the chief referee, stood at the front desk of the Frobisher Inn, using a pair of scissors to make yellow cards and red cards from construction paper.

“Think FIFA does this for the World Cup?” he said, smiling.

Occasionally, travel in Nunavut called for extreme alternative transportation. In 2011 and 2012, a soccer team from the village of Igloolik traveled about four hours over ice to Hall Beach, riding in an oversize sled called a qamutik, pulled by a snowmobile and bundled in winter gear and caribou skins.

[Soccer] helped provide a year-round activity, a sense of community, a connection to the outside world and a distraction from social problems like alcoholism, domestic violence, sexual abuse and the alarming suicide rate.

In this second story of the week, we enter an environment even more forbidding than the arctic; prison. In a handful of Utah prisons, sport is being used as the basis for rehabilitation. And it’s working.

[Kurtis Hunsaker] initially spurned treatment behind bars. [He] said he’d “rather pull my toes off with pliers” than attend AA meetings. He attended the initial Addict II Athlete meeting last spring and for the first time felt a sense of control. In contrast to programs that encourage patients to surrender to the addiction and call upon a higher power, he was in charge of his own workout, had an outlet for the pent-up emotions and anxieties and was part of a team. And perhaps just as important, he finally had something to look forward to each day.

Most games in prison have the familiar rules with minor wrinkles: In Ultimate Frisbee, for example, when a disc hits the fence, it sets off an alarm in the control room and is therefore considered a turnover; and in softball if the bat comes into contact with a person, the game is automatically over.

Where Ott and Orr Are Most Valuable: 15 Across, or Maybe 7 Down

by Victor Mather for the New York Times

They’re obviously nothing compared to living in the arctic or being in prison but for many of us, New York Times crossword puzzles are the toughest part of our week. One thing that makes them ever so slightly easier is the frequent reuse of some short, vowel-heavy names. Often, these are athletes whose crossword puzzle notoriety has outstripped their athletic achievements.

Of course, there is no conspiracy of delusional Ott-loving crossword constructors. Mel has gained his fame because of his last name, which is short and starts with a vowel. The clunky “DiMaggio,” with its double G, is much less useful to a crossword creator.

by Tony Manfred for Business Insider

While we’re on the subject of words, if you grew up a soccer player and fan like me, you may have developed a slight inferiority complex about calling the sport “soccer” instead of “football” or “futbol.” Read this article and hold your head high evermore.

The interesting thing here is that Brits still used “soccer” regularly for a huge chunk of the 20th century. Between 1960 and 1980, “soccer” and “football” were “almost interchangeable…” [After 1980] British people stopped saying “soccer” because of its American connotations. So, no, it’s not wrong to call it “soccer” if you’re American.