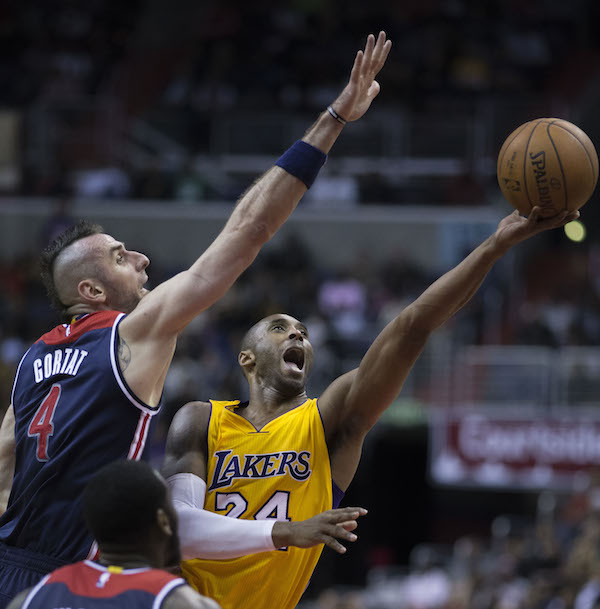 We all work on deadlines. Whether you’re a student working on homework, an office worker constructing a spreadsheet for his boss, a musician learning music for a show, or a writer hustling to get a piece complete in time for her editors to do their thing before publication, we all have deadlines. Even outside the realm of work, deadlines are a constant: better clean your room before Dad gets home, vacuum the living room before your friends come over, use the last of those sprouts before they start getting slimy. To a surprisingly large degree, how we manage deadlines determines how successful we are at work and at home, in our jobs and in our relationships and with ourselves. Basketball may seem like an unlikely source of wisdom but in many ways, it’s a sport that’s all about deadlines. Dig an inch deep into the foundation of basketball and you’ll find plenty of lessons about deadlines. Here are some of them.

Basketball has hard deadlines. Shoot the ball in 24 (or 35 in college) seconds. Inbound the ball in five seconds. Get the ball over half-court in eight seconds (1o in college). If a basketball team fails to do any of these things in the time allotted, they lose the ball and the other team gets it. There’s no extension, no extra credit for effort. These are simple, objective, hard deadlines with no forgiveness. Basketball players face these deadlines fifty to a hundred times a game and almost always beat them. In an average NBA game, each team will have the ball around a hundred times and only once in those two hundred possessions will either team miss the shot clock deadline.

If you want to be good on deadline, work on a lot of them

There’s nothing more exciting in basketball than a buzzer beater. A buzzer beater, as we explained in a recent post, is a shot that leaves a player’s hand before time runs out on a shot or game clock but goes into the basket afterwards. It’s generally a shot that ties or wins a game at the last possible moment. Making a buzzer beater is a triumph of calm under pressure and an acute understanding of exactly how much time is left before the clock runs out. Basketball players are freakishly good at doing this. Whether it’s 18.4 seconds, 8.4 seconds, or .4 seconds basketball players seem preternatural in their ability to beat deadlines. Of course, we know they’re not really super-human, they simply practice. Every day, every game, every possession, every time they play basketball, they do so with those hard deadlines we described in the last section. If you want to be ready to impress when time is tightest and your task is extremely important, prepare yourself by setting and beating deadlines every day.

Optimize each piece of work

In basketball, it’s not hard to beat the clock. You can usually dribble the ball over half court and then just chuck it at the basket. Simple, no fuss, and you’ve made your deadline! The problem is that despite beating the deadline, you probably won’t win the game this way because making a shot from so far out is difficult. Everything a basketball team does on offense is designed to create the easiest shot to make in the time allotted. Each player who catches the ball does a simple calculation in their head which we can translate to something like this:

If I shoot now, I have a x% chance of making the shot. If I pass or dribble, I might be able to increase that chance by y%. By taking the time to do that, I’m increasing my team’s chance of missing its deadline and therefore losing the ball from a% to b%. What should I do?

Basketball players approach their task by looking to optimize their chances of success. If they’ve got lots of time, they spend it working on increasing the quality of their shot. If they’re running out of time, they don’t panic or get down on themselves or whine, they simply take a lower quality shot and do their best to make it succeed anyway.

How often do you truly optimize when you’re working on a task? Do you think about quality or just about getting it done? Do you give yourself a chance to do your best possible work in the time you have?

Of course, if you’re a basketball fan, or a student of sports history, you may be thinking, “what about seven seconds or less?” Seven Seconds or Less

was a strategy popularized by Mike D’Antoni, coach of the Phoenix Suns and immortalized in Jack McCallum’s book. D’Antoni and the Suns believed that they could win by shooting the ball in the first seven seconds of the shot clock. This seems to go against the idea of optimizing for quality on each task that we suggested in the last section. It does, but not in an incompatible way. What the Suns realized was that deadlines are not isolated phenomena. Each deadline and each task happens in the context of other tasks and deadlines. The Suns thought about their goal (win a championship) and how they could best apply their resources to meeting that goal. They decided they would be best served by resolutely sacrificing quality for quantity. By playing at a faster pace than any other team had before, the Suns revolutionized the way teams think about playing basketball.

Take a step back and think about your goals. Are you better served by cramming forty hours of studying in over the weekend or settling for fifteen plus some relaxation and sleep? If you knock this report out in two hours instead of the eight you could spend on it, what else can you complete in the other six hours? How do you know when good is good enough or when it has to be close to perfect? Dole out your time and effort to tasks based on their contribution to your end goal not on how much time you are given to complete each task. Don’t let the deadlines drive you, take control.

Surely there are more lessons about deadlines to be found in basketball and other sports but I told myself I’d publish this by 2:30 and it’s 2:24 now, so I’ll stop writing now and hit publish. Hope you enjoyed reading this. Let me know what you think in the comments section below.