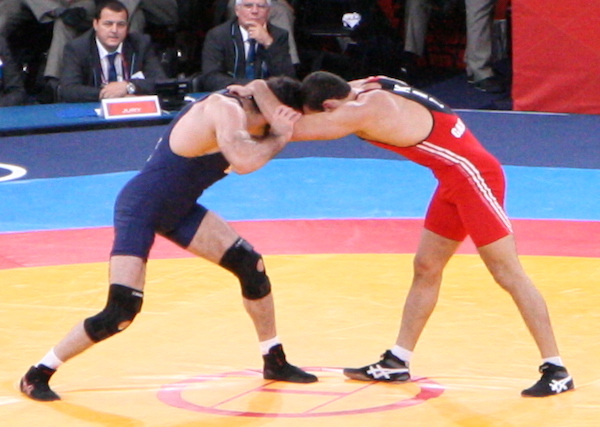 Two people face each other, searching for weaknesses. They are naked and covered with oil. They are wrestlers. That image is at the heart of the Ancient Olympics for many people, and for those people, wrestling must be at the spiritual center of the modern Olympics too.

How Does Wrestling Work?

There are two types of wrestling at the Olympics: freestyle and Greco-Roman. Let’s start with the similarities. Both are contested on the same surface — a flat cushioned mat with concentric circles drawn on it. The action is supposed to take place in the biggest of the circles, the central one. The smaller ring around that is called the “passivity area” and wrestlers may be penalized for spending too much time there. Outside of that ring is an area of mat which is beyond the wrestling area. A wrestler can score points by forcing their opponent into that out-of-bounds area. Both disciplines match one wrestler against another in a maximum of three two-minute rounds. Each round is scored independently — in other words, winning the first round 7-2 is the same as winning it 1-0 — and the first wrestler to win two rounds is victorious in the match. Both disciplines are organized by weight class so that wrestlers are close to even in size and strength. In both freestyle and Greco-Roman wrestling, points can be scored in a number of ways. The most well known way is by forcing your opponent to the mat and controlling them with at least three “points” (points are knees, arms, or head) touching the ground. One can also force an opponent to touch out of bounds, as we mentioned before. There are a couple of other, lesser known ways of scoring points. One is a reversal — where a wrestler who is in danger of being thrown turns the tables on his or her opponent and controls them. Another is called exposure which refers to the daring feat of placing your back near or on the mat and daring your opponent to pin you. The major difference between freestyle and Greco-Roman wrestling is how a wrestler can attack her or his opponent. Nothing below the waist is allowed in Greco-Roman wrestling whereas in freestyle wrestling throws and trips as well as mat-based manipulation that originates below the waist are common.

So, once you take out the nudity and oil of the original wrestling, what is left? Well, you’ve still got impressive determination, strength, and suddenness. Wrestling has a great combination of suspense and surprise — one dual spectrum on which to think about sports. Suspense is present during the majority of the match when the two wrestlers are circling each other, searching for an opening. Surprise comes when someone sees an opening and tries to exploit it. Olympic wrestlers can move faster than the eye can follow!

There are 18 Olympic gold medals up for grabs in wrestling events. 12 of them are for freestyle wrestling and six in Greco-Roman. Within each discipline and gender, competition is divided into weight classes.

How Dangerous is Wrestling?

Wrestling is perilous. Although striking (kicking or punching) is against the rules, the speed with which wrestlers throw their hands toward each other, searching for hand-holds, is significant. Someone is going to get poked in the eye. In the process of throwing or getting thrown, arms and legs tend to bend in the wrong direction and shoulders and necks get jammed or hyperextended. Wrestlers’ ears are often subjected to wounds that compound into the growth of nasty looking scar tissue. On the other hand, there’s a relatively low risk of concussion or other brain injury compared to other fighting or martial art related sports. So, wrestlers have a good long term prognosis.

What’s the State of Gender Equality in Wrestling?

The state of gender equality in this sport makes me angry. Men and women each have six weight class events in freestyle wrestling but only men are allowed to compete in the six Greco-Roman events. Why? What about not being allowed to grab at someone’s feet or legs suggests that this should be only a sport for men? The current state of wrestling is actually an improvement from four years ago when there were even fewer medals for women to win.

Read more about wrestling on the official Rio Olympics site.