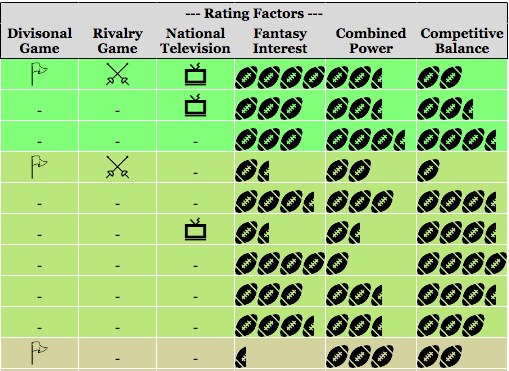 Dear Sports Fan provides resources for people who want to learn more about sports. Sports is a common language but it’s not universal. By providing simple explanations of the basic elements of sports as well as thoughtful commentary on culturally important sports stories, we aim to even the playing field and make sports accessible and enjoyable for everyone.

Football, football, football. For sports fans, those are the three most exciting words in the dictionary. It’s important to distinguish between football that’s worth watching on the big screen, games that should be put on a smaller screen, and games that should be given the miss all together. Why? If you live with a friend, family member, or partner who isn’t a football fan, this prioritization is important for domestic tranquility. Even if you live alone, there are plenty of times where you have to choose between games. This table ranks each weekend’s football games in order of priority. The factors used are whether the game is between two teams in the same division, whether it is a rivalry game (based on Wikipedia’s NFL rivalry page), whether it’s alone on national television. We also rate the game in terms of its fantasy football relevance (how many players in the top-150), combined power and competitive balance (based on Fox’s NFL power rankings.

Of course, if you’re a fan of a particular team, your rooting interest probably outweighs all other factors. And, unless you have a special subscription to all the NFL games or plan to go to a bar, you may have to choose between just the ones televised in your area.

I hope you find this table as useful as I do,
Ezra Fischer

Table icons made by Freepik from www.flaticon.com