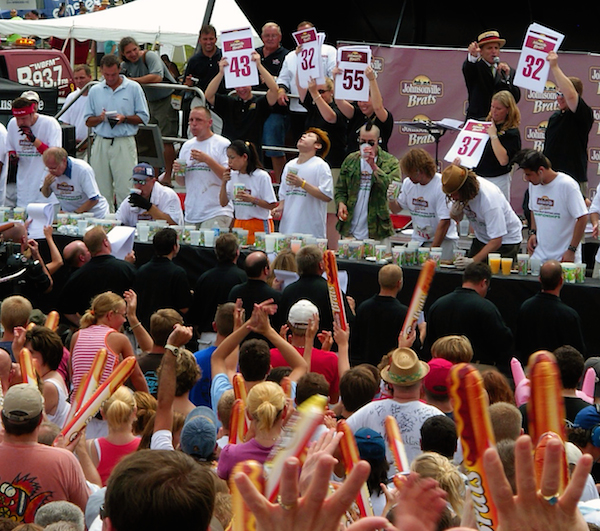 I feel like personal preference exists in all forms of entertainment. How is it that sports fans will choose any sport over anything else, even when the other option is something they like and the sport is one they don’t?

Confused and a little frustrated,
Sarah

What a great question! This is a great point about sports fans. Many of us watch an enormous array of sports often at the expense of other forms of entertainment. It is apropos for me to try to answer this on the Fourth of July, a day when each and every year I find myself horrified and fascinated but glued to the television for the annual hot dog eating contest on Coney Island. Why do I do this? It’s really, really gross but I suppose I watch it for many of the reasons I watch other sporting events:

I hope I’ve been able to answer your question. I’m off to watch the hot dog eating contest although I will probably switch back and forth to Versus’ coverage of the Tour de France. Later on there’s some international Under-17 Year-old soccer.

2 thoughts on “Why Will Sports Fans Watch Any and All Sports?”