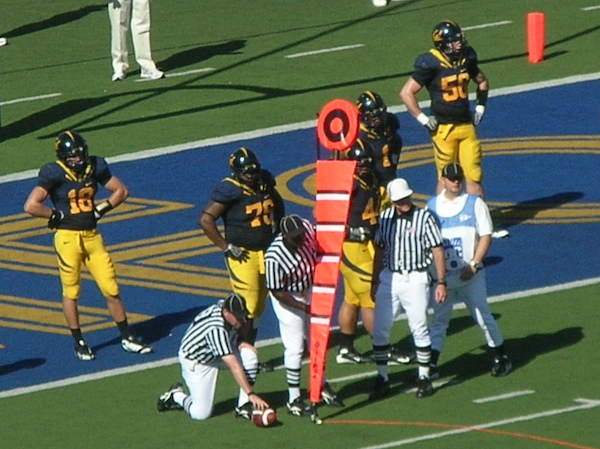 What’s a first down? How is it different from a 2nd down? And how many downs can you have? I’ve been pretending to understand football for years but i really have no idea.

Admittance is the first step and we are very proud of you for admitting that you don’t know what a down in football is. You are not alone — many people don’t! If you keep reading, by the end of this short blog post, you should be able to understand and explain the concept of a down!

When you are watching football you will often hear or see the phrase N Down and X.

When a team gets the ball in football, they start out each possession with four chances to do something. Each chance (N) is equivalent to one play.

If a team is successful in meeting their goal during any one of the downs, they get a brand new set of downs (four chances, not four new ones plus however many remained from their last set) and the pattern starts over.

You may be wondering what the goal is — the goal is to move the ball past an invisible[1] line which starts out 10 yards from where the ball is placed to start out on first down. This goal is expressed (X) as the number of yards between where the ball is now and where your team needs to get it to earn a new set of four downs.

The last wrinkle to learn is not about rules, but about strategy. Although it is totally legal to use all four downs to try to matriculate[3] the ball towards the yellow line, usually teams only try for their first three downs. Remember that if the team tries to move the ball past the line on fourth down and fails, the other team gets the ball right there. So, on fourth down teams will either punt the ball (conceding that the other team will get possession of the ball, but attempting to make them start from way on their side of the field) or try to kick a field goal (three points for the good guys) if they are close enough to try. In effect, this means the while First down = Four chances, normally only the first three of these “count.” On rare occasions, a team will chose to use their last chance to actually try to move the ball past the line. This is called “going for it on fourth” and is extremely exciting.

5 thoughts on “What's a Down in Football? I've Been Pretending to Know but I Don't!”