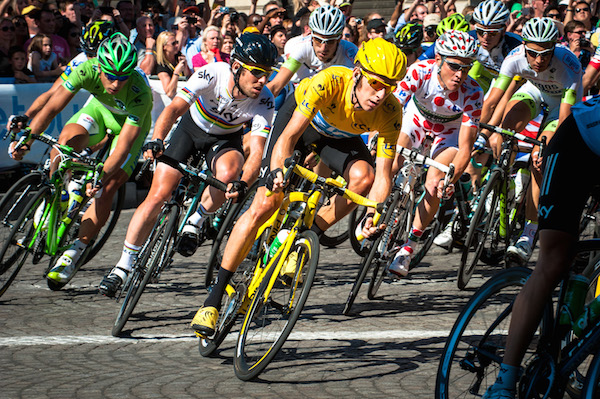 How is cycling a team sport? I remember bicycling alone a lot as a kid and it never seemed to hurt me…

Bicycling is definitely something that you can do alone, but cycling — particularly races like the Tour de France — are absolutely team competitions. The Tour de France is the most prestigious and most televised cycling competition. It is three weeks long and usually begins in early July. The riders will cover more than 2,200 miles in daily races called stages. It’s insane! The race usually follows a basic pattern. The first week or so stays mostly in the flatlands and is (in my mind, at least) pretty boring. Then the race hits some serious mountains and it gets much more exciting. This is normally where the overall winner of the tour will emerge. It’s also much more interesting strategically and from a soap opera stand-point.

Teams compete for a number of different things. There is a stage winner every day and winning even just one stage is quite prestigious for the rider and his team. Within each stage there are a certain number of points assigned to each mountain and each sprint (somewhat arbitrary spots on flat areas.) Riders earn points for going over the top of a mountain or across the sprint spot first, second, or third, etc. The number of points and number of riders that earn points varies based on the severity of the mountain or the importance of the sprint. The leader of the sprint competition is indicated by a green jersey and the leader of the climbing competition (called the King of the Mountains) wears a white and red polka dotted jersey. The leader of the race as a whole, defined simply as the rider who has finished all the stages in the least combined time, wears the famed yellow jersey. All of these things are prestigious and financially rewarding for the riders and teams that win them.

As far as I can tell, strategy in cycling is based on a single scientific fact: it’s much, much easier to ride when you are drafting on (riding right behind) another rider. So there you go, it all comes down to that. What teams do is organize themselves around their strongest rider. To win a stage what they try to do is exhaust all the other teams by riding at the front faster than anyone else can. The riders on the team who are NOT their strongest rider take turns at the front, riding full out until they simply cannot do it anymore. These guys are called domestiques which is French for servants and if you see the look on their faces as they work at the front of the pack for their team leader, you’ll understand why. At some point it’s up to the team leader (who is supposed to be the strongest rider after all) to take advantage of the fact that he’s been coddled by his team all day and all tour and accelerate (usually up a mountain) faster than anyone else can. The whole three week tour is often won by less than five or ten minutes, so a single good run up a mountain can often win the whole thing.

The soap opera of the race comes from the fact that unlike most other sports, the winning team is usually defined not by skill or tactics but by the capacity to endure pain.[1] The Stanley Cup playoffs are a little bit like this, when players regularly suit up for games with injuries that would leave the rest of us in a hospital, but the Tour de France is a unique spectacle of endurance, strength, speed, and just a pinch of lunacy.

One thought on “How is Cycling a Team Sport?”