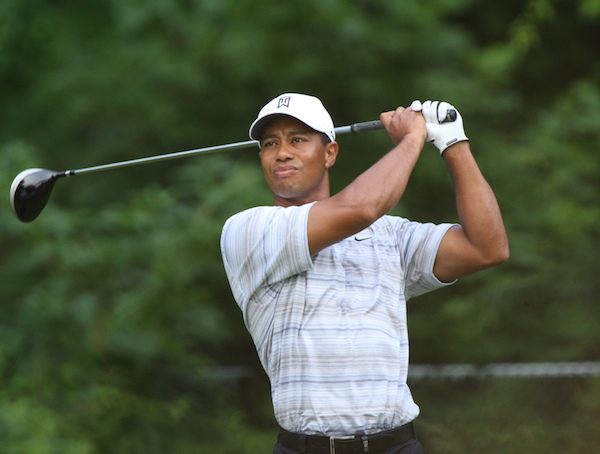 Why is everyone still focused on Tiger Woods when it’s clear he’s washed up, past his prime and old news all at once?

When I was in college the model UN club sneakily threw the best parties. They had the biggest budget of all the clubs and somehow, when their conferences were done, they always had enough money left over to buy a ridiculous amount of booze. When you’re a freshman or sophomore, that’s all you need.

The problem was the stigma of going to a model UN party. Even if they have the best booze, everyone thinks the model UN is populated by nerds and misfits and no one who’s NOT in model UN would ever want it getting around that they were seen at one of their parties. Unless, that is, model UN has one girl in it who is so incredibly attractive that she gives you a reason – a reason your buddies will buy – to go to their parties.

The PGA tour is the model UN party, without the booze. Unless you’re a die-hard golfer watching your ordinary, run-of-the-mill PGA tournament is a lot like standing around three college students arguing about the impact of a European-based missile shield on Russia’s nuclear deterrent capability: painful. PGA tour golfers were a pretty sleepy, uniform lot. Even the exciting ones were still nerds, and you can count on one hand the number of golfers who have more charisma than your average accountant. In fact, that’s a fun game for trivia night: print off pictures of PGA tour golfers, print off pictures from some accounting firm’s website and play “Professional Golfer or Professional accountant?” If anyone in your group does better than 50-50, they’re watching too much golf, and you and your friends will probably ridicule them for it.

Tiger Woods was the hot girl who showed up to the PGA Tour party and made it ok for sports fans – and non-fans – to watch golf.[1] For one thing, he looked like an athlete: he clearly worked out, you know, like athletes do. For another, he had charisma. World class charisma? Maybe not – but remember, we’re putting him next to 300 guys  with the charisma of people who do taxes for a living. He carried himself with what white people learned was called swagger, and we all ate up the fist pumps and the screams, and him running after his putt to make sure it knew where it was supposed to go. He had the showmanship thing down.

And, maybe most importantly, he was appointment-viewing. You never knew what Tiger was going to do, but chances are if you watched him long enough in his prime he’d do something incredible. Even if he didn’t, he had that aura about him that made you want to keep watching. And he won over and over and over, with the kind of single-minded determination we all admire in people who climb to the top of their professions.[2] At his peak he intimidated everyone around him and even the mere whisper of his name on Sunday would make other golfers fall apart.

Turns out, that kind of domination by an exciting, compelling figure – unlike, say Roger Federer, who dominated tennis in a similar way but never quite matched Tiger on the charisma scale – was great for golf. More people watched on TV, which meant the PGA tour made more money, which meant purses were bigger, which attracted more talent.

The problem is, at some point the hot girl leaves the model UN party,[3] and then it’s just a bunch of unpopular kids who may have good booze. That’s the future the PGA is staring in the face: declining viewership, a wealth of talented but boring players and no clear number one. One only has to watch the current crop of players awkwardly emulate Tiger’s fist pumps to realize showmanship doesn’t come naturally to everyone.

That’s why – no matter his sins – virtually everyone knows that a Tiger resurgence would be the best thing for the game, and why you’ll hear people talking about it for a long time to come.

One thought on “Why is Everyone Still Focused on Tiger Woods?”