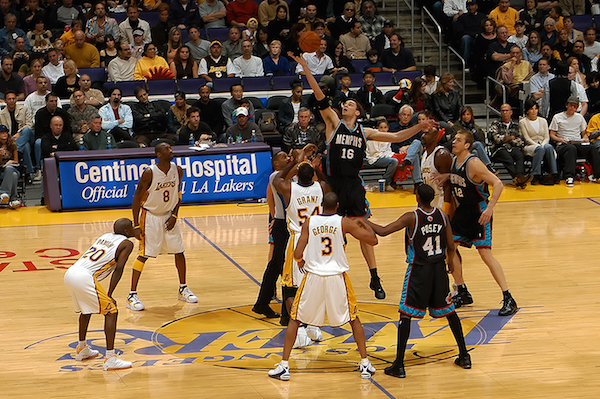 There are positions in basketball although like you pointed out, they are more fluid than football positions. In a traditional lineup, each of the five players on the court has their own positional label that corresponds to a general set of skills and a set of responsibilities. Basketball is also in the midst of a shift in the language people use to describe the positions. The older way of referring to positions is by name: Point Guard, Shooting Guard, Small Forward, Power Forward, and Center. The new form is just the numbers from one through five. This shift, aside from making things a little more confusing, matches a general shift in the way basketball is played. We’ll start by describing the positions from Point Guard or One to Center or Five and then talk about the general shift in the game. I’m going to describe these positions for men’s basketball but they hold pretty much just the same for women.

Point Guard or One:

Jason Kidd who just retired and Tony Parker are great examples of players who epitomize the point guard position.

The shooting guard is quite the opposite of the point guard. Roughly the same size as the point guard, the shooting guard distinguishes themselves by… you guessed it… shooting the ball! You won’t see them passing up a chance to shoot for a teammate, these guys know what their job on the court is and they are good at it. You’ll usually see shooting guards running around like crazy, using their teammates as obstacles to give them just enough space apart from the person guarding them so that they can get a pass and shoot before the defender catches up. They are often good at shooting three pointers (from behind the colored arc around the basket) and love to lurk in the corner waiting for a pass.

The small forward is the most acrobatic of the players on the court. Right in the middle in terms of height, these players use their athleticism to score however they possibly can. Their combination of speed, power, and skill allows them the versatility to shoot over their defender or run right by him to get to the basket for a lay-up or a dunk. As small forwards get older and start to lose their raw athletic superiority, they generally shift towards becoming more of a shooting specialist or, if they have the size for it, more like the players in our next position.

Paul Pierce and Joe Johnson are great examples of Small Forwards. Lebron James plays the 3 more often than any other position (he can really play all five) but he is such a unique athlete that he’s probably not a very useful example to study.

Karl Malone and Tim Duncan are classic power forwards. Dirk Nowitzki is perhaps the best example of the non-traditional or “stretch” four.

The center is the tallest guy on the court. There’s a saying in basketball that you “can’t teach height.” What this means is that no matter how skilled a smaller player is, a tall player will always have some advantages over them. As a result, there are a surprising number of centers, even in the NBA, who actually aren’t that good at or interested in basketball. They just happened to be the kind of seven-foot people who aren’t able to resist millions of dollars and a celebrity life. The center has undergone a similar trend to the one in power forwards in the past fifteen years but traditionally sets up on offense and defense as the closest person to the basket. On offense they catch the ball with their back to the basket and use their size to bump their defender until they can turn around and place the ball in the basket.

In terms of epitomizing what a center is like, there’s no one better to look to than Shaquille O’Neil although Bill Walton is another great player synonymous with the center position.

Over the past fifteen years, I’ve noticed people referring to the positions more and more by number instead of name. I think that this has come with the change in how the bigger positions are played. As mentioned in the description of power forwards and centers, a lot of recent players have the size traditionally associated with these positions but the skill and inclination to play the game more like a shooting guard or a small forward. As the more descriptive terms became less accurate (power forwards that aren’t exactly powerful… centers that play a whole lot at the edges of the court…) it became more popular to use the numbers from one to five to refer to players.