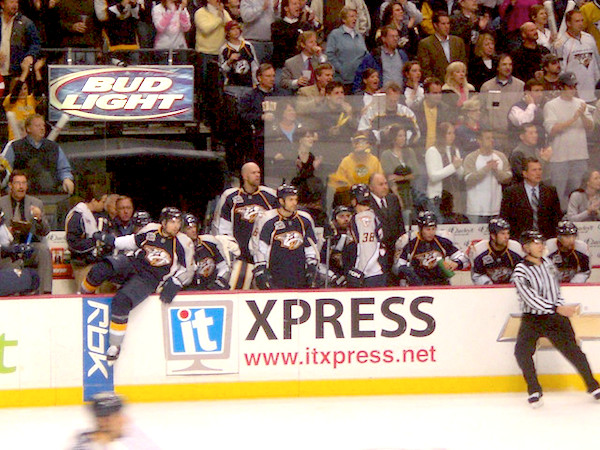 What does “having the last change” in hockey mean? Please tell me it has something to do with uniform color…

Hockey is one of a few sports that actually bakes into the rule book a couple of small advantages for the home team. Having the last change is one of those advantages and it means that the home team has more control over who on their team plays against particular players on the other team. Here’s how and when this happens and also a little bit of how a team might use this to its advantage.

Hockey is a completely exhausting game (this is one reason why it’s so exciting, as covered in our earlier post on why people like hockey) and the players can only play for about 45 seconds at a time. Hockey teams are therefore made up of about three to four times the number of players as can be on the ice at any time. Unlike football, there isn’t a break between plays, so when players have hit the end of their 45 second shift they skate to their bench and return to it to catch their breath while another player on their team launches themselves onto the ice to replace them. This process looks incredibly chaotic but is normally pretty controlled (and when it’s not, the team that has messed up their substitution often puts themselves at risk for having a goal scored on them). Periodically there will be a break in the play, usually because either the puck has been shot out of the rink, a goalie covers up the puck, a goal is scored, or a penalty is called. When this happens, both coaches have the opportunity to reflect for a second or two and then choose which players they want on the ice.

Coaches will do anything do gain an advantage, and as we will explain later, you can definitely get an advantage through clever player substitutions. As you would imagine, with no rule in place to legislate such things, both coaches would try to see who the other coach is going to put on the ice and then decide who they choose for their team. As exciting as this would be to watch, the NHL decided to control things with a rule that states:

82.1 Line Change – Following the stoppage of play, the visiting team shall promptly place a line-up on the ice ready for play and no substitution shall be made from that time until play has been resumed. The home team may then make any desired substitution, except in cases following an icing, which does not result in the delay of the game.

The home team will use this rule to their advantage by watching to see when the visiting team puts their best offensive players on the ice and then countering with either their best pair of defensive defense-men or their best unit of defensive “checking” forwards. Conversely some home teams will wait to see when their opponents put their best defensive players on the ice and then scuttle their offensive stars back onto the bench to patiently wait for the visiting team’s players to get tired. Of course a lot of the time a visiting coach will have a pretty good idea who the home coach wants to get on the ice. A lot of it is situational — for instance, if a team is down by a few goals and the puck is going to be dropped near their opponent’s goal, they are definitely going to want some of their better offensive players on the ice. So a visiting coach is pretty safe in putting his best defensive players on the ice — I mean what is the home team going to do? If a match-up is really important to a coach he may be willing to instruct his players to play just until their team gets the puck and then to quickly skate off to be replaced. THEN the other coach might tell his players to do the same. It all has the effect of turning a graceful hockey game into something that looks like this.

If this all sounds a little cowardly or over-complicated to you, you might be right. Home teams in the NHL do win more than away teams (55.7% of the time) but that’s actually not that much compared to the advantage of home teams in other sports like the NBA (60.5%) or even the NFL (57.3%) and neither of those sports have any rules that make life easier for the home team. I’m not sure why that is. Maybe some of the advantages that a home team gets are counter-acted by the simplicity of being the away team and knowing that they cannot dictate who plays against who. There are so many factors that go into the advantage a home team has (emotion, routine, intimidated refs, etc.) that it would be pretty hard to isolate this one… but I’m sure there’s a statistician out there working on it!