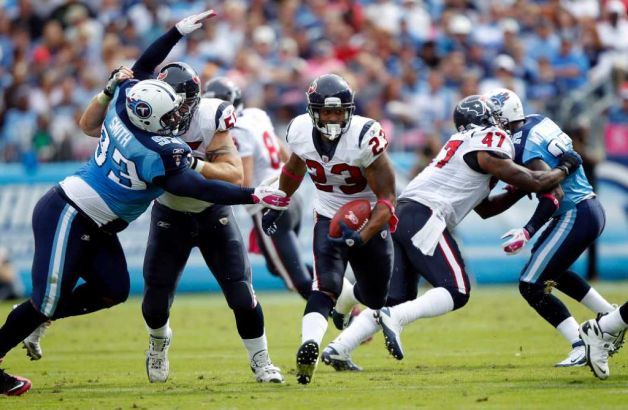 In preparation for the rapidly approaching football season, Dear Sports Fan is publishing a series about the basics of football. Some previous posts answer the questions: Why Do People Like Football, How do I Begin to Enjoy Football, Why Are People Obsessing About Fantasy Football Now, and What’s a Down in Football? Today’s post is the first in a set that explores each of the key football positions.

What is a Running Back in Football?

If football were a farm, the running back would be the pig. Like a good pig, a good running back is compact, strong, and very hard to catch. The job of a running back is multifaceted. Running backs are expected to be able to catch the football reliably and to prevent defenders, who are often much bigger than them, from getting to the quarterback, but that’s only part of it: the primary job of the running back is to take a few steps, grab the football as it’s handed to them, and then charge off down the field while avoiding as many defenders as possible before being tackled or pushed out-of-bounds.

Running back is one of the toughest jobs in football. A running back either gets hit or hits a defender on almost every single play. Sometimes both happen in a single play. Running backs have the shortest professional careers of all the positions (4.35 years according to a 2002 Dartmouth study), but they make up in immediate impact what they lose in longevity. Running backs don’t waste time growing into their professional careers; unlike other positions, they can be effective right out of the gate. The diverse skill set of a great running back includes some very unexpected qualities, like great peripheral vision and low center of gravity.

There is an overall trend in professional football to run the ball less and throw it more. This has made running backs a less important part of football strategy. The running back remains essential to most teams’ fortunes but there is a romantic air of inevitable obsolescence that lingers around the position.

What Kinds of Running Backs are There?

A feature back is the running back on a team that gives the majority of its carries (plays when a running back takes a hand-off and runs the ball up the field) to a single person. A great running back can make an enormous difference to a team’s fortunes so it’s no surprise that teams who have star running backs feature them a lot. Twenty carries per game has traditionally been the average that defines a feature back but, like the fullback, this number has declined in the past ten years. Last year only three running backs averaged more than 20 carries per game over the whole 16 game season.

You won’t hear a lot of people refer to a running back as a feature back — it’s a term that will be used to differentiate one person who plays the running back position from another who does it but does it in a different way. As you might expect from a position that requires so many different skills, there are players who specialize in one aspect of the position. Increasingly over the past ten years, teams have used several specialized running backs instead of one great generalist. This approach is called “running back by committee.”

The fullback is a blocking specialist. He often lines up right in front of a running back and uses himself as a bowling ball, scattering would-be tacklers away from the path of the running back who has the ball. Fullbacks are big, hulking guys with necks the size of medium-sized tree trunks. Alas, the fullback is a dying breed in the NFL. Over the past fifteen years, teams have gradually moved away from using fullbacks. This season it will be pretty rare to see a fullback on the field. Although the fullback is officially one type of running back, it is specialized enough that it’s basically considered another position, as opposed to the types of running backs we’re about to describe.

The third-down back is usually a smaller, quicker running back who is better than most at catching the ball. This is dictated by the situation teams find themselves in on third downs. If a team is not within a yard or two of getting a first down, they will almost definitely be passing the ball. The third down back is the best running back on the offense for when the team is planning on passing. Sometimes, instead of playing their best receiving running back on third down, teams will choose to put a veteran who can reliably “read the blitz” (figure out who it’s their job to block). When it comes down to it, regardless of strategy, the third down back is a back who plays mostly on third down.

Some teams have a running back who specializes in getting into the end-zone when their offense is within five yards of scoring a touchdown. Like a third-down back, this specialty is defined by situation. Unlike the third-down back, the goal line back tends to be bigger and stronger instead of quicker and more wriggly. Plays close to the end-zone are much more compact than those that start somewhere in the middle of the field, because all twenty-two players on the field are smushed into only a few yards instead of the twenty to thirty yards that could be expected otherwise. Goal line backs use patience and vision to find small weak spots in the defense and then use their formidable strength to push through them to make it to the end-zone.

What is the Fantasy Football Importance of the Running Back?

Traditionally the running back was the most important position in fantasy football. This is because most fantasy football leagues require each fantasy team (twelve is the most common number) to use the stats from two running backs each week but only one quarterback. The statistical difference between the best quarterback and the twelfth best was not as great as that between the best running back and the twenty-fourth best. This is still true today but much less so because of the overall decline in use of the running game and the splintering of the position into specialist running backs that split the work. As in real life, fantasy fortunes are often cyclical, so the glory days of a running back’s importance may come again.