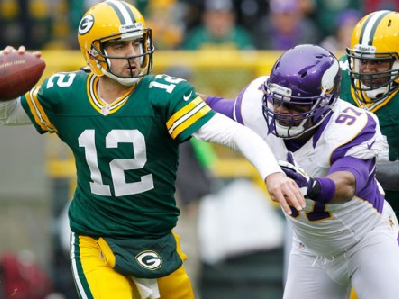 In preparation for the rapidly approaching football season, Dear Sports Fan is publishing a series about the basics of football. Some previous posts answer the questions: Why Do People Like Football, How do I Begin to Enjoy Football, Why Are People Obsessing About Fantasy Football Now, and What’s a Down in Football? This post is one in a series that explores each position on a football team. So far we’ve covered What is a Running Back in Football.

What is a Quarterback in Football?

A great quarterback has to have a rare mix of physical, emotional, and intellectual abilities. He has to have a strong throwing arm, great footwork, and enough physical toughness to pick himself up and keep playing after a couple 300 pound defensive players crush him into the turf. A less obvious but essential physical quality is a strong, untiring voice. Quarterbacks have to communicate with their teammates over the noise of the crowd. Although teams do develop systems of hand-signals and other physical cues to use when it gets too noisy, these are measures of last resort. Quarterbacks vary in terms of emotional bearing — some go for cool and confident while others are fiery and combative — but they all have to be able to inspire their teammates. With all the attention focused on them, they also have to foster a type of willing amnesia in themselves. No matter how big of a mistake they or one of their teammates make, they need to get up and treat the next play as if the last one never happened. Quarterback is not necessarily the most intellectual position on the field (that prize probably goes to the offensive line that protects the quarterback) but it requires a wide understanding of where every player on the field is, an encyclopedic memory of plays, and unbelievably quick decision-making.

A given play for a quarterback goes something like this:

The first three things happen before the time the ball is snapped,  but everything else has to happen in an average of 2.5 to 3 seconds.

What Kinds of Quarterbacks are There?

A pocket passer is a quarterback whose first through ninth option on a passing play is to throw the ball. If he cannot find anyone good to throw the ball to, he’ll usually find a way of “throwing the ball away.”[1] The word “pocket” in the phrase “pocket passer” refers to the protected area that a team’s blockers try to create for their quarterback. A pocket passer is not unathletic — he’s usually very adept at sliding around in the pocket to avoid defenders that make it through his blockers — he just very rarely chooses to run with the ball past the line of scrimmage.

Historically, there has been an insidious racist belief that black athletes couldn’t succeed in positions that required a lot of intellect or leadership, but that they were somehow more “naturally athletic” than white athletes. Black athletes were therefore relegated to playing running back, wide receiver, and defensive positions. Despite the long history of black quarterbacks in the NFL, people continue to associate whiteness with unathletic pocket passing quarterbacks and blackness with athletic running quarterbacks. These beliefs inform both how people think about and view quarterback performance AND the choices made by developing young athletes and their coaches.

What is the Fantasy Football Importance of the Quarterback?

Quarterbacks score the most points in most fantasy leagues but are traditionally not the most important position. This is because there’s less difference between the best quarterback and an average quarterback than there is between the best running back or wide receiver or tight-end and an average player in that position. Also, most fantasy leagues use the stats from two or three running backs and wide receivers on each team but only one quarterback. In only a few of the last seven years has an unexpectedly excellent performance by the best statistical quarterback in the league made having the best quarterback more important than having the best running back or wide receiver. Logic aside, because watching football involves a lot of watching quarterbacks, having a bad quarterback on your fantasy team, like on your real-life team, is a sure-fire way to make yourself miserable. Don’t make yourself miserable, get a good quarterback but you don’t need to shoot for a great one to win your fantasy league.

One thought on “What is a Quarterback in Football?”