Defensive backs are the smaller, quicker, and faster defensive players who frequently serve as a defense’s backstop – the last, best hope at stopping an offensive player who’s gotten loose. They’re the players you’ll see lined up across from wide receivers or otherwise spread out, usually 10 or so yards behind the line of scrimmage – though some of them may play closer to the line of scrimmage and even blitz (a berserker-like attempt to hit the quarterback before he can throw the ball) occasionally. 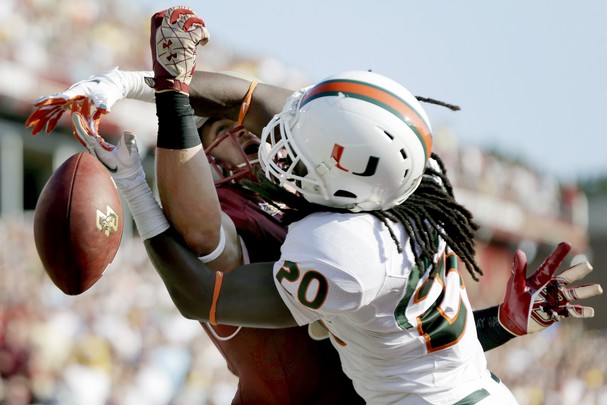 In preparation for the rapidly approaching football season, Dear Sports Fan is publishing a series about the basics of football. Some previous posts answer the questions: Why Do People Like Football, How do I Begin to Enjoy Football, Why Are People Obsessing About Fantasy Football Now, and What’s a Down in Football? This post is one in a series that explores each position on a football team. So far we’ve covered What is a Running Back in Football and What is a Quarterback in Football. We move to the defensive side today to cover the Defensive Backs.

What is a Defensive Back in Football?

Defensive backs are the smaller, quicker, and faster defensive players who frequently serve as a defense’s backstop – the last, best hope at stopping an offensive player who’s gotten loose. They’re the players you’ll see lined up across from wide receivers or otherwise spread out, usually 10 or so yards behind the line of scrimmage – though some of them may play closer to the line of scrimmage and even blitz (a berserker-like attempt to hit the quarterback before he can throw the ball) occasionally.

Defensive backs have a wide array of assignments and physical skills. They have to be strong enough to tackle a running back who is running at full speed and skilled and crafty enough to closely follow the path of a wide receiver doing his best to get open for a pass from his quarterback. The defensive back spends a lot of his time running backwards at full speed. They have to be quick enough to follow the moves of the wide receiver. It’s like following in a couples dance with an insanely athletic partner who not only won’t tell you what the moves are but is actively trying to trick you.

Defenses use their own brand of trickery to try to regain the initiative the offensive side has. Defensive players engage in a dizzying array of schemes to cover receivers. Diagrams of these schemes are as complicated as a molecular model but for our purposes there are three overarching coverage concepts: man to man coverage, where each defensive player is assigned to cover a specific offensive player, no matter what happens; zone coverage, where each defensive player has responsibility for a specific area of the field and covers any player who comes through; or, a combination, where, for example, two defensive backs may cover one talented receiver while the other defensive backs play zone on the rest of the field.

There are a lot of other terms associated with coverage schemes – “jamming” a receiver, for example, basically means grabbing him and keeping him from leaving the line of scrimmage. The “bump and run” is a type of coverage where defensive backs jam the receiver for a second just to throw the play’s timing off, then turn and run with him. There are many more, but the general concepts outlined above should give you a good foundation.

You’ll occasionally hear commentators say that an offensive player made it to the second or third “level” of the defense, which refers to how far down the field he was tackled. The first level means the player was stopped by the defensive linemen, usually for a short gain;  second means he was stopped by a linebacker for a medium gain (3-6 yards) and the third meaning he made it into the defensive backfield and was tackled, after a longer gain, by a….well…defensive back.

What Kinds of Defensive Backs are There?

Cornerbacks have a single job: they cover the opposing teams’ wide receivers, running as close as possible to them to prevent the quarterback from completing a pass. Oh sure, they’ll tackle a running back if he happens to come their way and no one stops him first – but they’re not known for their tackling prowess and it’s sometimes amusing to watch them avoid tackling someone.

Not surprisingly, cornerbacks are the players you see lined up directly across from the receivers. They’re selected based on their speed and “ball skills” – a fancy term for the ability to intercept or knock down a pass. One of the cynical running jokes in football is that if cornerbacks could actually catch, they’d be wide receivers – but since they can’t, they do the job where it’s simply knocking the ball down is considered a success.

In reality, nowadays NFL teams put a premium on pass defense for the simple reason that the league features more prolific passing offenses. As a result, cornerbacks are frequently just as athletic as the receivers they cover. They’re just as likely, if not more likely, to return punts and kickoffs in addition to their primary responsibilities, specifically because they’re so fast and athletic (and, the cynic would say, because returning kicks is dangerous enough that the league has talked about removing them from the game, teams use defensive backs for this job because they’re less valuable than wide receivers.)

Safeties are cornerbacks who hit. They’re bigger, meaner, tougher and have to be strong tacklers because, in addition to covering receivers, they are tasked with stopping the bigger, stronger tight ends and running backs. All the best safeties are known for being able to “read” what an offense is about to do and get to where the ball is going to be almost as if they had been told before-hand what the play was. A safety who uses his instinct and intellect to “read” an offense like this better be right, because they – as their name implies – are the last line of defense. If an offensive player gets by the safety, there’s a pretty good chance he’s going to score.

There are two types of safeties: the strong safety and the free safety. The distinction is fairly technical and has to do with where they line up on the field and what their responsibilities are once the play starts.

What are the Fantasy Football Implications of Defensive Backs?

4 thoughts on “What is a Defensive Back in Football?”