If football were a medieval battleground, the offensive linemen would be the castle walls and the battering rams. Offensive linemen are gigantic human beings. They are usually well over six feet tall and three hundred pounds heavy. Don’t let their size fool you, they are still faster and quicker than you are. They are also generally thought to be the smartest players on the football field. 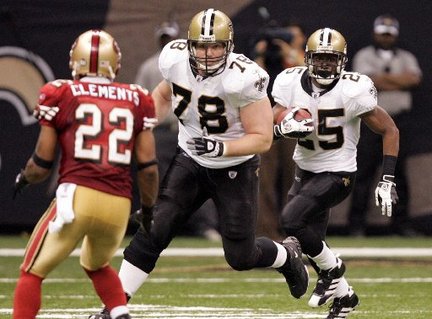 What is an Offensive Lineman in Football?

If football were a medieval battleground, the offensive linemen would be the castle walls and the battering rams. Offensive linemen are gigantic human beings. They are usually well over six feet tall and three hundred pounds heavy. Don’t let their size fool you, they are still faster and quicker than you are. They are also generally thought to be the smartest players on the football field. Their job is one of the most complicated and important. When their team calls a pass play, offensive linemen are tasked with preventing the defensive player across from them from getting past them and hitting the quarterback. This usually involves moving generally backwards with a bend but don’t break philosophy. When their team calls a run play the offensive linemen’s job is to create an open lane for the running back to run through by forcing defensive players to move in one direction or another. Success involves seamless coordination between five linemen and at least a few other players. Failure means that at best the offensive play falls apart. At worst failure can mean the quarterback gets seriously injured and your team’s chances for the year take a serious hit.

Offensive Linemen are my favorite players in football. If I could have had the size, strength, attitude, and talent to play in the NFL, I would have wanted to be on the Offensive Line. Part of that is that I’m just attracted generally to any position that requires size that I can’t even imagine having. Another part of it is the psychology of the position. Lineman is interesting because it encourages many common football traits like aggression, competitiveness, and willingness to subject oneself to the team but the position’s primary psychological feature is protectiveness. Although we recently wrote a post all about Michael Lewis’ book The Blind Side, I can’t resist sprinkling this post with stories from the book. Two come to mind that pertain to the psychology of Offensive Linemen. The first is about the subject of the book, Michael Oher. Still a high-school kid discovering his abilities as a football player, he was also learning how to drive. One day he and his adoptive little brother were in the car together when they got into a an accident. When the paramedics got to the scene they were shocked at how little damage the airbag had done to the little brother, much less than they would have expected given his age and size. It turns out that Oher had instinctively thrown his arm between the airbag and his brother, and though the airbag burned his arm, he managed to save his brother from harm while also exhibiting an extremely protective nature and preternatural physical abilities. Every Sunday in the NFL provides offensive linemen with a supreme challenge of protectiveness and the pressure to succeed is enormous. Lewis tells us that many linemen don’t sleep the night before games, so haunted are they by the fear of failing to protect their quarterback.

There are five players in the offensive line and they are divided into three positions, Center, Guard, and Tackle. Thirty plus years ago, these positions were more or less interchangeable but since then they have become specialized. It’s rare today to find players that can play all three positions. 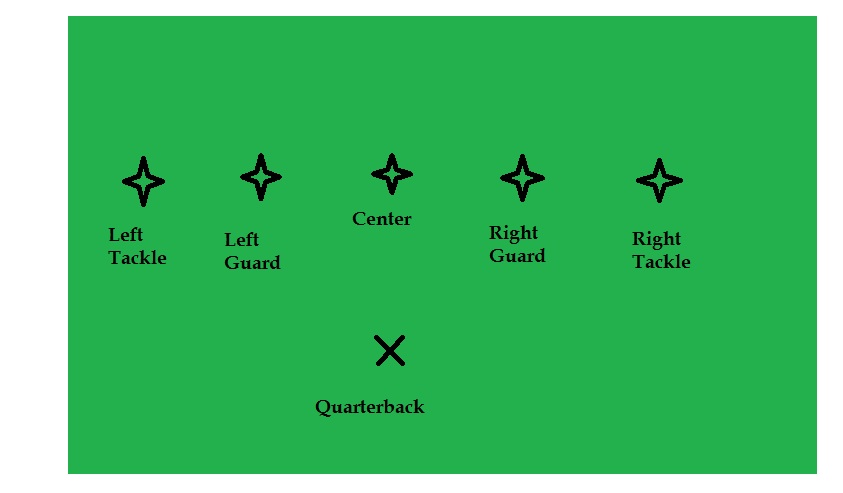 As you would expect from the name of the position, the center is the player in the middle of the offensive line with two linemen on either side of him. He begins each play with the football and his action of snapping the football backwards is the official start of the play. This means he needs to be in completed sync with the quarterback (yes, when “under center” a quarterback’s hand rests right under the center’s general crotch/ass region, and often signals that he wants the ball by gently pushing his hand up…) and very closely coordinated with the rest of the team who cannot move until he snaps the ball. Teams have two main ways of achieving this. The first is an audible snap count. Used when a team can hear itself think (usually at home) the quarterback will signal the center and the team to start the play with some code, like the fourth time he says blue or the seventh time he says banana. A silent count is some physical signal — the quarterback will stomp his foot three times or slap his hip or something.

Once the play begins the center’s job is not so different from the rest of the linemen but he is at a physical disadvantage. Because he’s had to use his hands to snap the ball, he needs an extra second to get them into a good position to block his opposing defensive linemen. You don’t often see dominating blocking from a center because of this.

Centers are also often kind of coaches on the field for the rest of the offensive line. They are most likely to be the ones that look at the way the defense is lining up and make sure that each offensive lineman knows which person or area he’s responsible for blocking.

The guards are the two offensive linemen directly to the left and right of the center. They are the least glamorous of the linemen. They don’t have the responsibility of guarding the edges of the line versus pass rushers nor do they collaborate so closely with the quarterback. What they focus on is run blocking. Guards love when their team calls a run and they get to drive the lineman opposite them into the ground. A phrase you might hear is that someone is a “good pulling guard.” What this means is that player is good at quickly getting behind the center and “pulling” over to the other side of the line where, because he’s an extra big, strong body on that side of the line, he can usually create a nice road for his running back to run through, paving the way with the bodies of defensive players who make the mistake of getting in the way.

The tackles are the two offensive linemen on the edges of the five man line. Their primary responsibility is pass blocking and they face the biggest challenge because they only have a fellow lineman helping them on their inside side. Often they will get a little help on their outside, either from a tight-end or a running back, but these are generally smaller players who can’t block as well as linemen. A tackle who can successfully and reliably protect the quarterback without needing help from a running back or tight-end is extremely valuable because it gives the team the flexibility to use those players in other ways. It’s almost like having an extra player on the field.

Alas no one has figured out how to generate enough measurable statistics from offensive linemen so that they can be used in fantasy football. That doesn’t mean you should ignore them though. Research into which teams have strong or weak offensive lines (and things that might make them stronger or weaker like new players, injuries, new coaches, etc.) can tell you a lot about how successful the teams’ quarterbacks, running backs, and receivers are likely to be.

3 thoughts on “What is an Offensive Lineman in Football?”