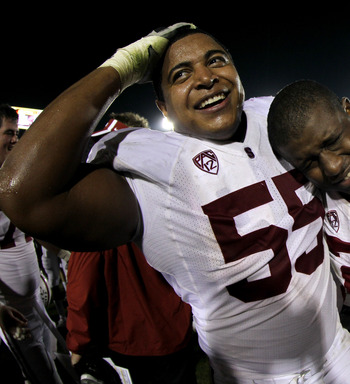 The Jonathan Martin, Richie Incognito story, which we summarized a couple of days ago on this site, continues to fascinate the sports world and has had far-reaching cross-over appeal to the rest of the world as well. One of the notable aspects of the situation is Johnathan Martin’s background and how that may have played into his being victimized in an NFL locker room.

Martin’s parents are both lawyers and graduates of Harvard. He also has a grand-parent and even a great-grandparent who graduated from Harvard. Martin attended an elite prep school in California before deciding to go to Stanford instead of Harvard because it offered him the opportunity to play college football at the highest levels. People have used these facts, coupled with Martin’s decision to leave the Dolphins after more than a year, to argue that Martin was either a larger target for harassment or less able to stand up to the normal level of harassment than he would have been had he not come from a fairly rich, fairly stable, extremely well-educated background.

For example, the Jason Reid story in the Washington Post abstracted the argument by noting that:

Being an outsider can make you a target in the unforgiving, alpha-male world of the NFL — especially if you’re African American. Generally, the league’s black players come from lower socioeconomic backgrounds. If not for football scholarships, many never would have attended college. They share a bond that comes from the all-encompassing role the game has played in improving their lives, both financially and in social status. In reaching the NFL, Martin took a road less traveled.

Basically, the story… is one in which the massive, otherwise intimidating black guy is being picked on by his better-compensated white teammate for not being ‘hood enough. (Wait, what?)

Fox Sports brought on another former NFL player who had gone to Stanford, Coy Wire, to address the question of “Do “Stanford guys” or “smart guys” fight an uphill battle when trying to prove their worth…?” Unsurprisingly, Wire argued that although he didn’t think “anyone ever feels universally accepted in an NFL locker room,” he didn’t believe that being intelligent, or coming from a privileged background should be thought of as a show-stopper.

Growing up in a wealthier neighborhood is a major, positive predictor of reaching the N.B.A. for both black and white men. Is this driven by sons of N.B.A. players like the Warriors’ brilliant Stephen Curry? Nope. Take them out and the result is similar.

Admittedly, basketball and football are different sports and I don’t know if the same logic can be applied to football. It’s possible that the greater risk of physical harm one must accept in football skews it more heavily toward disadvantaged participants. But it’s enough to make me have second thoughts about the basic, underlying “facts” of the Martin, Incognito story. How sure are we that we even understand the makeup of an NFL locker room? Before we paint the story with a broad brush, let’s take time to listen again to people who have been there, like Coy Wire, who describes the environment as “a melting pot of people from different parts of the country, with differing cultural roots, moral compasses and socio-economic upbringings.”