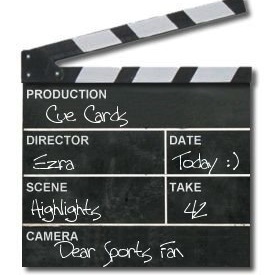 On Mondays during in the fall, the conversation is so dominated by NFL football that the expression “Monday morning quarterback” has entered the vernacular. The phrase is defined by google as “a person who passes judgment on and criticizes something after the event.” With the popularity of fantasy football, we now have Monday morning quarterbacks talking about football from two different perspectives. We want you to be able to participate in this great tradition, so all fall we’ll be running NFL One Liners in our cue cards series on Monday. Use these tiny synopses throughout the day:

New York Jets 14, Buffalo 37 — Jets quarterback Geno Smith outdid himself in his pattern of alternating good and bad weeks. This was one of his bad weeks and it was very bad.

Baltimore 20, Chicago 23 — After being delayed by almost two hours because of tornado-like weather conditions, this game became everything football should be: sloppy, muddy, and suspenseful. The soaked home fans who stayed outside for five hours were rewarded with a win.

Cleveland 20, Cincinnati 41 — As my girlfriend pointed out, both of these teams wear orange which makes them hard to tell apart. Luckily, you can tell which team the Browns are because they’re usually losing.

Washington 16, Philadelphia 24 — The Eagles won their first home game of the season… and took possession of first place in their division. That doesn’t speak highly of the football teams in the NFC East.

Arizona 27, Jacksonville 14 — Tied at 14 at half-time, the Arizona defense shut the Jaguars out in the second half to help their team win their third straight game.

Oakland 28, Houston 23 — At the start of the year, only the most die-hard football junkies had heard of quarterbacks Case Keenum and Matt McGloin. Today they played against each other in a real, live NFL game!

San Diego 16, Miami 20 — After one in the first quarter, the Chargers couldn’t produce another touchdown against a Miami Dolphins defense that’s probably pretty annoyed about all the dysfunction on the offensive line.

Green Bay 13, New York Giants 27 — The Giants started 0-6. After four straight wins, they are 4-6 and looking like winners. But the quarterbacks for the past four teams they’ve played have all been terrible — making this point will make you seem unpopular in NY but knowledgeable everywhere.

Minnesota 20, Seattle 41 — The Seahawks hide their excellence in plain sight by wearing teal and playing in the Pacific Northwest. Apparently they are really good at winning football games!

Kansas City 17, Denver 27 — This was the most anticipated game of the day, the undefeated Chiefs traveling to Denver to play the 8-1 Broncos. The best defense in the league (the Chiefs) versus the best offense in the league (the Broncos.) It sort of lived up to its billing but not really. The teams play again in two weeks, so get ready for more hype!