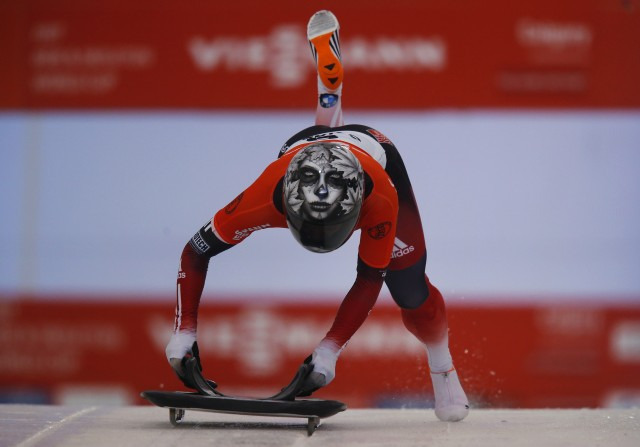 To prepare for the Winter Olympics in Sochi, Russia which begin on February 6, 2014, Dear Sports Fan is running a series of previews of Winter Olympics events. So far we’ve profiled the Luge and Bobsled.

Like the luge, skeleton is one an evolutionary spur of sledding but instead of lying down backwards, skeleton racers fly down the track head first and on their stomachs. I thought it was pretty daring when I was a kid and used to go head-first down the stairs on my stuffed whale. That was nothing compared to skeleton! Skeleton is an old sport but has only been a medal sport in the olympics in 1928, 1948, and since 2002. The U.S., Canada, and Great Britain have the most medals for this sport in Olympic history.

How Does Skeleton Work?

When a skeleton run begins, the sled is on the ice with the racer perched next to it in a sprinter’s stance. The athlete rocks back and forth and then explodes out of their stance, pushing the sled alongside him or her. The goal is to get the sled moving as fast as possible in the first 50 meters down the course. At the 50 meter mark, the timing of the run begins and the skeleton racer will have transitioned from sprinting as fast as possible to lying as flat and as still on their sled as possible by dint of a leap. From this point on, speed and fluidity are the essence of the sport. The sleds have no breaks (in fact, according to olympic.org, “Competitors attempting to slow down on the course are disqualified.”) and steering is a full-body maneuver accomplished primarily by pressing a shoulder down on one side or another but also involving legs and even toes. All of this is done at speeds up to 90 miles per hour with their heads inches from a concrete-reinforced tube of ice.

Here is a video of a skeleton run at a recent competition:

What Are the Different Skeleton Events?

There are only two sets of medals issued for skeleton in the olympics, Men’s singles and Women’s singles. The winners are calculated by taking the cumulative time from all four runs and awarding the gold medal to the athlete with the lowest time. Because the time from every run is used in the final score, there’s very little room for error.

How Dangerous is Skeleton?

There may be fewer catastrophic crashes in skeleton than in luge, as we mentioned above, but it’s  still not particularly safe. The Canadian Olympic team has been limiting the number of training rides for their members because of what skeleton riders call “sled head.” Sled head is a nice term for the mental state of skeleton riders who have suffered too many concussions. As we are discovering in other sports, concussions happen most frequently from blows that twist the neck or rotate the head. This happens regularly to skeleton riders on rough tracks and whose heads “are exposed to knocks along the wall if they make a steering mistake.” Yikes.

What’s the State of Gender Equality in Olympic Luge?

Annoying at best. There are two medals up for claiming: one for men and one for women. Women are allowed to be lighter than men (okay) and start lower down on the track so that they go slower than men (less clear why.) The really annoying part of the gender dynamics of this sport at the Olympics is that with a total of 50 spots for skeleton in the Oympics, 30 go to men and 20 to women. Wha? Huh? I’m guessing the argument is that this represents and equal or even higher percentage of competitive skeleton athletes of each gender (i.e. there are more than three competitive male skeleton racers for every two women) but isn’t that the point? Equalize the number of potential Olympians and my guess is that the number of women competing at lower levels will rise too.

If you’re interested in becoming a skeleton sledder, or are just curious about the sport, newsliders.com is a great website about participating in skeleton.

3 thoughts on “Winter Olympics: All About Skeleton”