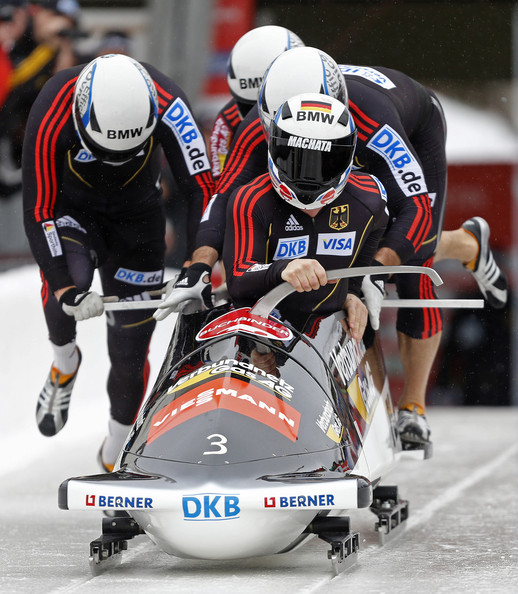 To prepare for the Winter Olympics in Sochi, Russia which begin on February 6, 2014, Dear Sports Fan is running a series of previews of Winter Olympics events. So far we’ve profiled the Luge and Skeleton.

Bobsled, or Bobsleigh as it is officially called, is the kind of sledding competition that would have been designed by a combination of NASA and NASCAR. Two or four people travel down a narrow icy track at speeds that can reach over 100 miles per hour in a rocket-shaped vehicle made of steel, fiberglass, and whatever other materials teams can find that slide really fast! Of the three sledding disciplines, luge, skeleton, and bobsled, bobsled is the most turbo-charged.

How Does Bobsled Work?

Bobsleds are designed to hold either two or four people. The race begins with the sled at a standstill and the racers beside it. At the count of three (or as I remember from watching as a kid, commonly “eins zwei drei”) the racers sprint forward, propelling their sled by pushing thin metal rods that extend from the sides. Their goal is to get the sled up to speed as quickly as possible and then jump in and duck down. The farthest forward person ducks down into the tip of the sled/rocket and steers using a two rings, which are attached to ropes, which are then attached to a pulley, that is attached to the metal runners under the sled. It’s fascinating how simple the steering is. Shortly after the driver jumps into the sled, the second person leaps in and tucks down behind the first. Then the third and fourth, if it’s a four person sled. The metal handles retract into the sled to reduce air-resistance. Most races are won or lost by who gets the best start. After the riders are into the sled, the trick is to steer as minimally as possible because every adjustment slows the sled just a tiny amount. Obviously there is no braking until the race is done.

Here is a video of American bobsled driver Stephen Holcomb talking through a bobsled run:

What Are the Different Bobsled Events?

There are three bobsled events at Sochi. There’s a two-man sled, a four-man sled, and a two-woman sled. All of the events consist of four runs and the winner has the lowest cumulative time from all four runs. This means if one person is a little slow jumping into the sled, if one person slips a little on the ice or doesn’t get a good grip on the push-bar, or if the driver makes a tiny little mistake going around a single corner, that mistake could be hard to make up on the other runs.

How Dangerous is Bobsled?

If I gave you the choice of crashing into a wall of ice covered concrete going 80 miles per hour in nothing but a skin-tight suit or tucked into a metal container with three of your best friends, which would you choose? Okay, fine, they’re not your three best friends — you don’t actually want them to crash. It’s a tricky question and neither choice is a good one. Crashes in Bobsled have a higher chance of going right — after all, fiberglass is pretty tough and takes some of the impact away from the racers’ bodies — but they also have a high chance of going very, very wrong. The descriptions of some fatal crashes from the 1950s and 1960s in this article on stuff.co.nz are hard to read.

What’s the State of Gender Equality in Olympic Bobsled?

Bad. This sport is crying out for equality. Why a four-man sled but not a four-woman sled? Is it because women are unable to work together? To coordinate their actions? That doesn’t even sound like a negative stereotype of women — it sounds like a negative stereotype of men! I’m guessing that, like starting lower on the course, it’s an attempt to slow the women’s race down so that women are less likely to get injured. This makes less sense to me in bobsled than in luge or skeleton. With all the sliding sports, the heavier the sled and rider are, the faster they go, but the lighter they are, the more likely they are to go airborne with drastic results when something goes wrong. I’ve got a solution. Make ALL the teams, men’s and women’s the same weight by adding ballast to the women’s sleds. Pah. At least there has been some improvement — before 2002 there was no Olympic Women’s Bobsled at all.

What are Some Fun Olympic Bobsled Stories?

Lolo Jones, the American Olympic hurdler and celebrity virgin has qualified to be a member of our women’s bobsled team this year. This type of cross-over from another sport to bobsled is not all that rare — football player Herschel Walker competed in the 1992 Olympic games — but Jones’ celebrity will make her a focus of attention. Despite being a strong contender in the 2008 and 2012 Summer games, Jones has never medaled and there’s always been the feeling that she was more interested in promoting herself than the team. The lower-profile and more team oriented nature of bobsled offers a redemptive opportunity for her to finally medal and recreate her image.

Cool Runnings, the Jamaican bobsled team made famous by the 1993 movie, is back with a cooler backstory than ever! This year’s team qualified for the Olympics but didn’t seem like it would be able to afford the trip. That was when THE INTERNET swooped in. Days later, funded by crowdtilt, indiegogo, and even a crypto-currency called dogecoin, the Jamaican sledders are going to Sochi!

One thought on “Winter Olympics: All About Bobsled”