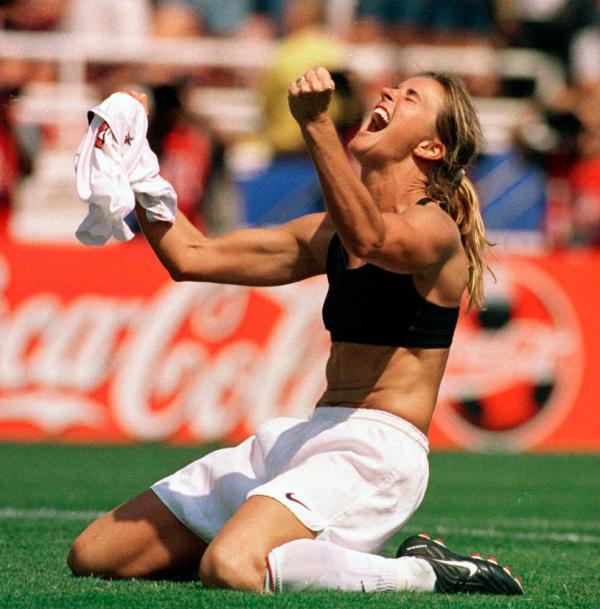 Soccer is often called the beautiful game because it consists of almost constant fluid motion by twenty two players; because of the way players seem to dance over the ball to fake each other out; because of the way the ball dips and swerves when shot with power. So why is it that so much of the scoring involved in the game happens when one player starts from a stand-still right in front of the goalie and takes an unobstructed shot?

A penalty kick is an unobstructed shot on goal taken 12 yards from the center of the goal with only the goalie present to stop the shooter. It is awarded to the attacking team when they are fouled within the big rectangular area called the penalty box or the 18-yard box. Penalty kicks are often decisive moments in a soccer game because soccer is such a low scoring game and penalty kicks so frequently result in goals. In the World Cup, penalty kick competitions called shoot-outs are used to determine the winner of a game in the knock-out round if it is tied after two fifteen minute over-time periods. In a shoot-out the two teams alternate taking penalty kicks until one team has scored more than the other. It begins with a best-out-of-five-rounds competition and then if both teams have scored the same number after five penalty kicks each, it moves to a best-out-of-one-round format which continues only as long as both teams make or both teams miss their penalty kick.

One of the great things about the World Cup is that each national team has its own distinct personality and that personality reflects the nation it represents. This holds true with how they fare taking penalty kicks and in shoot-outs. Among the traditionally strongest teams, there are some that excel at penalty kicks and some whose fans dread them because their team almost always flubs them. For example, Brazil and Argentina have won 66% of shootouts and Germany 60%. Those three teams have won 10 of the 19 World Cups ever. Then there’s a group in the middle that are neither good nor bad at shootouts: Italy, France, and Spain are all around 50%. Finally there are the two traditional powers notorious for their poor showing in shootouts: England and The Netherlands are a combined 2-12 in shootouts all-time.

As you might expect for something that is so important to so many people, there’s been a fair amount of research on what makes a good penalty kick and what makes a good penalty kick taker. Scienceofsocceronline.com tells us that penalty kicks are successful 85% of the time and that the most successful strategy for goalies is not to dive to one side of the net or the other on a hunch but to stay in the middle of the net. Too bad that this is the least common strategy for goalies… maybe because if it doesn’t work, you look like the idiot who “didn’t even try” to stop the penalty kick. The Telegraph has a great interactive graphic that lets you choose where to place the kick and shows you the success rates of each part of the goal. The New York Times ran an article before the 2010 World Cup which argued that success and failure in penalty kicks was mostly about psychology and confidence. They noted that the success of a penalty kick declines in each round of a shootout from “86.6 percent for the first shooter, 81.7 for the second, 79.3 for the third and so on.” More dramatic was their finding that “Kick takers in a shootout score at a rate of 92 percent when the score is tied and a goal ensures their side an immediate win. But when they need to score to tie the shootout, with a miss meaning defeat, the success rate drops to 60 percent.” One of their most interesting findings was about what a player who scores early on in the shoot-out can do to help his teammates:

One of Jordet’s conclusions deals not with the run-up to a kick, but what occurs afterward. A player who celebrates demonstratively after scoring, he said, increases the chance that his teammates will score later in the shootout and also increases the likelihood that the opposing player who shoots immediately after him will miss.

“I make this point every time I work with a team,” said Jordet, who was an adviser to the Dutch national team from 2005 to 2008. “Some players score and look like they’re at a funeral because they’re still nervous.”

So there you have it — it pays to celebrate, even in soccer!

Soccer traditionalists hate the shoot-out because it decides important games with something that really isn’t soccer. When tournaments were less focused on television and a game ended in a tie, the two teams would go home, rest for a couple days, and then come back and play another game to see if a victor could be determined. This just isn’t practical anymore. Viewers want to see a winner and the schedule must be kept to for an international audience of billions. The shoot-out has become an integral part of World Cups and even though I am a grouchy old traditionalist who roots for games to be decided in regulation time or in over-time, even I have to admit that shoot-outs are nerve-jangling, edge-of-your-seat, exciting television.

One thought on “What is a Penalty Kick in Soccer?”