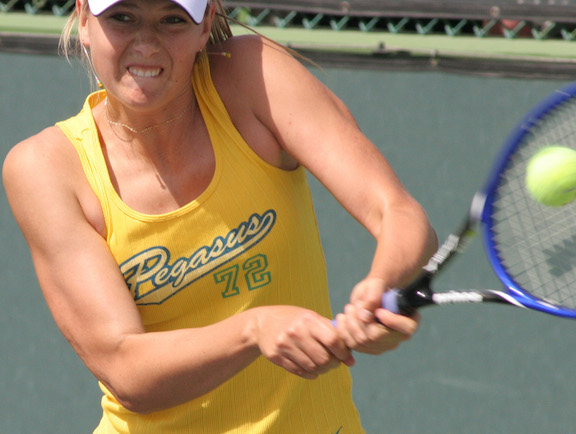 What’s with all the screaming and grunting in tennis? Why do they scream so much? Why don’t we ever hear other athletes scream? Is it just some weird tennis thing?

You’re absolutely right. One of the most noticeable things about watching tennis on television is its sounds. Tennis is a funny mixture of silence punctuated by horribly loud and awkward noise. Let’s dig into it.

The Silence of Center Court

First of all, it’s silent most of the time. The U.S. Open is known as the loudest and rowdiest of the major tournaments but that’s just because sometimes, once in a while, the crowd makes a little noise. There’s a weird division in sports between sports where the crowd makes as much noise as possible and sports where the crowd isn’t supposed to make noise at all. Tennis and golf are the most notable examples of the non-noisy sports. In golf, players are known to scream at the crowd for any little noise it makes at the wrong time, while in tennis, play won’t even start until the crowd has hushed. Given the number of times you hear athletes in noisy sports claim that, beyond just not being negatively effected by crowd noise noise, they can’t even hear it, golf and tennis’ attitude towards crowd noise seems a little silly.

The Sound of Screaming

Once you get used to the contemplative sounds of tennis — the silence, the rhythmic thwacking of ball on racket, the scraping, scuffling, or squeaking of tennis shoes on the court — you are interrupted by the only real jarring sounds in the sport: the screaming and grunting of the players themselves. Tennis players are so loud partially because they are miked well and partially because there’s not much crowd noise to drown them out but also because there seems to be a couple of major voice-viruses that have taken hold in the ranks of professional tennis players and refuse to be eradicated.

The first of the voice-viruses you notice is the grunting. Tennis players grunt a lot. Depending on player and situation, these grunts range from short, strained grunts to obscene sounding moans to full on horror movie screams. Matt McCarthy wrote an article for Deadspin.com about why tennis players scream so much. His answer is that it gives them a competitive advantage. The effects, he writes, are many. Grunting allows players to hit the ball harder than they would otherwise. Screaming serves to release tension and relax the screamer. Moreover, screaming has a negative effect on your opponent. In a control study, participants were “21 to 33 milliseconds slower, and they were 3 to 4 percent less accurate at predicting where the ball was going” when distracted by screaming.

All of this talk about screaming in tennis reminded me of another article I had read, also from Deadspin.com, about a year ago. This article, about why tennis players say “come on” so much by John Koblin looked deep into the history of tennis for an answer. Like many cultural phenomenon, there really isn’t a clear answer. Tennis players yell “come on” a lot just because that’s what tennis players yell. Not for lack of trying but Koblin couldn’t even get a straight answer on when it began. Nonetheless, the article is very enjoyable, especially when it verges on the comic as in these two paragraphs:

“Sharapova’s working on a daily double,” said [Pete] Bodo, who’s been covering the game for four decades. “She’s got the horrible scream plus the really desperate comeonnnn. It doesn’t even sound like come on! It sounds like something else.”

“You used to be able to hear, like, ‘Come. On.’ Now it’s just like a yell,” said [Nick] McCarvel. “[Petra] Kvitova is famous for this. She’ll say pojd—which is come on in Czech—and it comes out asprruhhh, and you’re just like, ‘Wait, what?'”

As you watch the U.S. Open this year, also listen. You’ll hear silence, screaming, grunting, and “COME ON!!”

2 thoughts on “What's with all the screaming and grunting in tennis?”