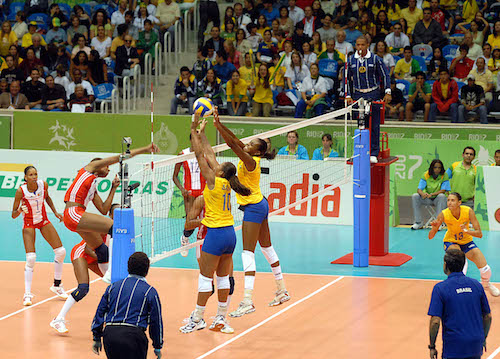 Volleyball is a funny sport when you think about it. I mean, why shouldn’t the ball hit the ground? Why do teams of people go to such lengths to keep it from hitting the ground that they look like semi-trained seals? Like most sports, once you accept the invented framework of the game, it’s a lot of fun. Volleyball has a few features that make it exceptionally fun to play and to watch. Here they are:

How can you argue with a sport that has wonderful words for so many of its actions?

This is probably my favorite part about volleyball, both as a player and a viewer: volleyball punishes selfishness. How does it do that? In volleyball, a team loses a point if the ball hits the ground on their side of the court. Each side of the court is roughly thirty feet by thirty feet and each team consists of six people. This is a reasonably small area for that many players to be at the same time. Compared to soccer or even basketball, it’s very crowded. Keeping the ball in the air is hard enough but if a selfish teammate tries to wander into someone else’s area to hit the ball, it almost always ends badly. The first problem is that there usually isn’t enough time or space for the person being encroached upon to get out of the way. Even if they are able to skedaddle and the poacher hits the ball, he or she is usually out of position to respond to the next hit for the other team.

In this way, volleyball teaches great lessons about teamwork and… revenge. I have fond memories of beating selfish jocks in gym class with a team of kids they wouldn’t ever dream of losing to in a sporting event.

Volleyball scales well with the player

Volleyball is unusually flexible in terms of who can play it. It remains fun whether you play it with young children, on a recreational league team with other aspiring volleyball players, or competitively in college, a professional league, or international play. At all levels, the object remains the same (keep the ball from hitting your side of the court, make the ball hit the other side of the court,) but the challenges vary. When played with beginners, the main challenge is just hitting the ball over the court. With intermediate players, hitting the ball over gives way to working with your team to hit the ball over in a way that makes it more difficult for the other team to respond to. At the highest level, the challenge transforms into out strategizing and executing your opponent. The complexity of the tactics available are impressive. It’s no coincidence that the Wikipedia page on volleyball has pictures of both Buddhist monks and nudists playing the sport.

One of the things that turns a lot of people off sports is how thoroughly devoted to competition most sports are. Volleyball, especially at more beginner levels, isn’t really like this. If the biggest challenge in the game, as we wrote above, is just to get the ball over the net, then it really isn’t that competitive of a sport. Sure, the team that fails to get the ball over the net fewer times wins, but that’s really a judged team activity as opposed to a competitive activity. Not until intermediate or expert play does volleyball become a sport where players actively engage with opponents they are trying to beat.

That was an amazing play by two great teams playing a very cool sport.