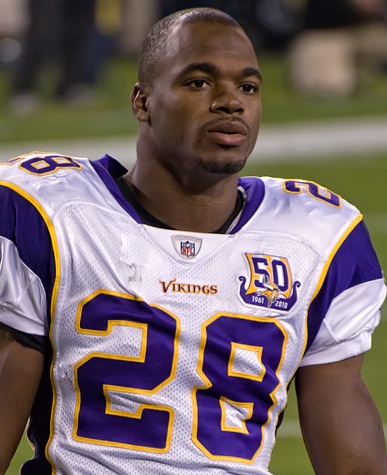 This may be out of your wheelhouse, but … ever since Randy Cohen retired, I can’t bring myself to email the Ethicist.

I loved watching football last year, even though I didn’t understand a thing. It’s been suggested to me that in order to really learn what’s happening, I join a Fantasy Football league. So, I have. My friend is helping me and our first-round draft pick is Adrian Peterson… Yeah. So, assuming he eventually plays again this season — what do I do? Is it ethical to keep him on my team?

P.S. If it helps you decide, I stopped watching the WWE mainly out of ethical concerns. Am I just done with sports?

You are facing an ethical quandary.

For those who don’t know, Adrian Peterson has been accused of child abuse. Peterson left deep cuts on his son’s legs after beating him with a switch (thin tree branch). His son is four years old. The facts in this case are undisputed because Peterson readily admits what he did. In an article from the local CBS in Houston, near where this happened, reporter Nick Wright describes Peterson as “very matter-of-fact and calm about the incident, appearing to believe he had done nothing wrong and reiterating how much he cared about his son and only used “whoopings” or “spankings” as a last resort.” Like in the Ray Rice domestic abuse case, this story is augmented by visual evidence. In this case, photos of a four-year-old’s wounded legs. They’re readily available online but the child’s mother is apparently asking for them to be taken down, so I won’t even link to them. I’ve seen them and they’re fairly deep, long cuts around the thighs. They’re bad, and they reinforce Amy Davidson’s brilliant argument in the New Yorker that this case should not be a part of the cultural conversation about the appropriateness of corporal punishment. About that conversation, she writes:

This is a valuable, crucial conversation, and Carter is an important voice. It’s not, though, what we’re really talking about in the Peterson case. This preschooler wasn’t paddled or, as Peterson put it to police, “swatted”; he was whipped with a stick and left with open wounds on his body.

When this news broke, Peterson’s team the Vikings deactivated him from their roster. Since then he was briefly activated and then, perhaps after some serious meetings on the part of team management, re-deactivated. That’s where we stand now.

To return to your question — is it ethical to keep Adrian Peterson on my fantasy team? It’s an interesting and complicated question. First of all, let’s establish that it is a reasonable question to ask. As I wrote in my post about why fantasy football drafts are so exciting, fantasy owners do sometimes make (one-directional) emotional connections with the football players on their fantasy teams. Your success becomes linked with their success, so as you root for yourself, you root for them. Once you know that’s likely to happen, you do think about whether or not you’ll want to root for a player when you choose to have him on your team. In the past, players like Ben Roethlisberger (accused of sexual assault,) or Riley Cooper (filmed using the racial epithet aimed at black people during a country music show) would give fantasy owners pause during their drafts. In this case, when you chose Adrian Peterson, his record was clear and clean. You certainly were not acting unethically when you drafted him.

Now that you know what you know, is it unethical to keep him on your team? Being on your fantasy team doesn’t help Adrian Peterson in any material way. I suppose you could make the argument that the more fantasy teams he’s on, the more popular he is, and the more popular he is, the more likely it is for companies to sign him to endorsement deals. Rest easy, he’s not going to be getting any endorsement deals any time soon. Playing fantasy football absolutely supports the National Football League, and I could see an argument for not playing fantasy football as part of a larger boycott of the NFL, but that’s not what you’re suggesting here. Likewise, dropping him is not going to punish him in any way. While athletes are often very concerned with their video-game alter egos’ skill ratings, very few seem to care about their fantasy instantiations.

When you play in a fantasy league, there’s another set of people you should think of when it comes to ethics: your friends who you’re playing fantasy football with and against. You owe them some ethical consideration too. Here, the ethics are clear — dropping a player who you think has more value based on the rules of your fantasy league than the player you’re replacing him with is unethical. It’s unethical because it means you’re intentionally not abiding by the spirit of the group activity you agreed to participate in. You’re throwing the competitive balance of the league off. If your league, like many, plays for money, this ethical consideration is reinforced. In fact, with a star like Peterson, you often cannot drop him. Fantasy sites maintain lists of “undroppable players” that protect leagues against unscrupulous fantasy owners who may decide that if they can’t win, they just want to mess it up for everyone. Peterson has been on that list for years but was just taken off either because of people asking your question or because his suspension makes dropping him defensible from a competitive standpoint.

Ethics don’t require you to drop Peterson but they don’t mandate that you can’t either. You may be so angry or upset from reading about this story or seeing the photos that you just flat-out don’t want to see his name near yours. That’s fine, I support you in that decision. If you do decide to drop Peterson for non-competitive reasons, you should email your league first, let them know what you’re doing and why, and give people a chance to chime in. Perhaps they will simply agree to let him sit, unclaimed on the waiver wire, as if he has been put in time-out, which,  come to think of it, is a strategy he might benefit from learning about.

Thanks for the question, let us know what you decide to do,
Ezra Fischer