The green dot on a football helmet signifies the player whose coach can talk to him through a radio. It has a long and curious history to explore… 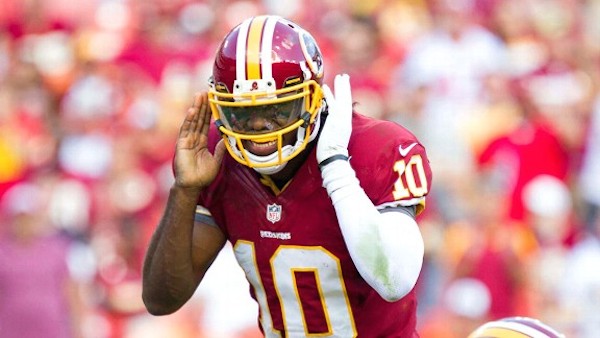 The green dot on the back of a football helmet means that there is a small radio receiver and set of speakers inside that helmet so that the player wearing it can hear their coach talk to them at specific times during the game. This seems like a really weird thing to have in the middle of sporting event but it’s not as rare as you might think. Race car drivers and cyclists have two-way radio capabilities during races and, although without radio technology, most team-sport athletes can hear their coaches during games. National Football League stadiums are just so loud during games that without radio, coaches would not be able to talk to their players. Let’s find out a little more about the history and use of radio in the NFL.

The first coach to put a radio receiver into a helmet was legendary Cleveland Browns coach Paul Brown (not related) way back in 1956. Mark Bechtel wrote a great article about this for The MMQB.  A few themes that will follow us throughout the history of the helmet radio were present at its inception: radio interference and attempts to cheat and counter-cheat with the radio. At this point, there were no rules legislating the use of helmet radios, so just having them was seen as cheating. It didn’t work that well for the Browns though because their opponents quickly, “became suspicious when they realized that Brown was no longer using offensive linemen to shuttle in plays.” Soon, another opponent got wise to what was happening and, “simply listened in and asked a former Browns player to decipher what was being said, then prepared accordingly.” Not that listening to the radio was all that helpful to anyone. Radio technology being what it is, there was a little bit of cross-pollination. According to Bechtel, the Browns stopped using the helmet radio when their quarterback, “called timeout, took off the helmet and reported to Brown: “Coach, some guy just got stabbed over on Fifth Avenue.” Not so long after, the radio was officially outlawed by the commissioner of the NFL.

The radio made a comeback in 1994 when its use was legalized as part of a sweeping set of changes intended to make life easier for the offense. Kevin Craft chronicles the history of these changes in a Slate article on the topic. The rule allowed for quarterbacks and only quarterbacks to have radio receivers in their helmets so that their coaches could talk to them. The only real caveat to their use was that the receivers would shut off for the last 15 seconds of the 40 seconds each team has to run a play. As soon as the rule went into effect, the race to cheat started. ESPN’s Mike Sando wrote an article in 2007 about all the various ways a team could try to beat the system and communicate all the way through the play clock. Jamming your opponents’ ability to communicate is another good cheat that teams have been trying (or accusing other teams of trying) since the radios were legal. And although the radios are now digital, jamming complaints continue despite highly encrypted and monitored systems. Meanwhile, the interference that led the Browns to give up the system in disgust back in 1956 have been a comedic trope all the way through. The articles I read for this post were full of funny interference stories. My favorite is from Sando’s article:

“I remember one time I was playing, I forget where it was, but I could hear the concession communication,” said Tennessee’s Kerry Collins, a veteran of 148 regular-season starts. “They were asking for popcorn on the second level or something like that.

In 2008, the NFL modified the helmet radio rule to allow for one defensive player to wear a radio in their helmet as well. In Jim Corbett’s article about the rule change for USA Today, he surmised that it was part of a league effort to “counter-balance the New England Patriots’ illegally video taping of the New York Jets’ defensive hand signals in last year’s season opener.” The same fifteen second cutoff applies to the defensive radio helmet which is most often worn by a middle or inside linebacker. Basically team’s want their best, smartest defensive player who almost never leaves the field and is centrally located enough to pass messages on to the rest of his unit to wear the helmet.

Back to the green dot. The dot is actually a sticker with a small NFL logo on it that the guys over at Uni Watch absolutely hate. The NFL rules about radios make it very clear that only one player from each team is allowed on the field at a time with a radio in their helmet. On offense, this is simple — it’s the quarterback — but on defense, there may be some packages that even the best middle linebacker isn’t in. In that case, an alternate player, who registered with the refs before the game as being a radio alternate, can come in off the sidelines with a second radio helmet, designated with a green dot. Before the play starts, he has to tell an official that the primary radio player has left the field and that he’s now the radio guy. The green dot helps officials make sure that there’s only one player from each team with a radio helmet on during each play.

My question has always been — what are the coaches really saying to their players? Oh, I’m sure they say the name of a play, but that only takes a second or two. Coaches are crazed, egotistical people. Are they really able to resist the temptation of being able to talk to a player who can’t talk back? Corbett provided us just a glimpse of this one-way communicative world:

“It scares the hell out of you sometimes because Pasqualoni is not the calmest guy in the world,” Crowder says. “He gets to yelling in there every play. He’ll say, ‘Watch the run! Watch the pass! Watch it!’

I guess in the end, the green dot on football helmets lets us know which player is most thoroughly being harassed by his coach.