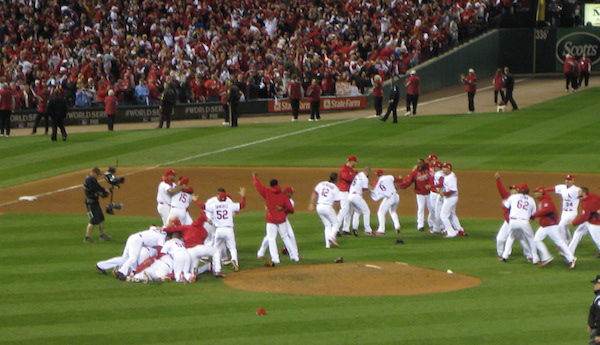 If you’re a sports fan, there is nothing better than a game seven. If you’re a fan of the team in the game seven, it’s the most dramatic, heart-wrenching, nerve-wracking, squeal inducing sports situation your team can possibly be in. If you’re simply a fan of sports but don’t have a rooting interest one way or another, game seven is a joy. If you’re wondering what I’m talking about and why game sevens are so great, read on.

Just reaching game seven in a seven game series tells you so many things about the series. For one thing, both teams have won (and lost) three games. The two teams are close to even in skill and determination, otherwise one would have been eliminated before then. There have been lots of ups and downs during the series. There’s been enough time for the players on the opposing teams to get to know each other and (usually) develop an explosive mixture of begrudging respect and bubbling disdain. This is magnified in sports like hockey where so much physicality is allowed during the game. It’s also magnified the farther you go in the playoffs. A first round game seven is not as dramatic as a second round game seven. Some sports, like baseball, recognize this and save the seven game series for later rounds, using shorter series earlier on. A game seven in the Stanley Cup finals, the NBA finals, or the World Series is the absolute pinnacle of sporting drama. The team that wins these game sevens are achieving life-long dreams and reaching the highest professional success possible.

Even if you put all the other factors aside, game sevens are still really cool because of their emotional resonance for the players. One common complaint about professional sports is that the fans care more about the teams than the players do; that the players are mercenaries who do it just for the money. In a game seven, you know that every player who steps on the pitchers mound or the batting box, every player who vaults over the boards onto the ice, every player who grabs a rebound or makes a layup, somewhere, in the back of their heads is thinking “Game seven, World Series/Stanley Cup final/NBA final…” just like they did when they were nine years-old in their backyards playing with a friend or two. Game sevens have a way of reducing sports back down to their essentials. Box out. Dump the puck. Make contact. Keep your eye on the ball.

Tonight the Kansas City Royals and the San Francisco Giants play in game seven of the World Series. Let’s enjoy it.