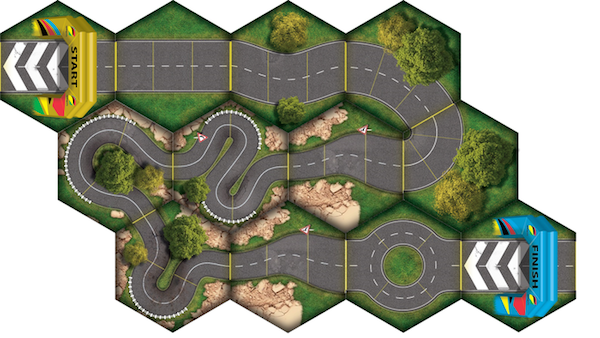 Whether you’re an avid sports cyclist, a fan of professional cyclists, or just someone who rides her bike to work everyday and loves board games, you might be interested in this clever board game that represents cycling in an innovative way. Cycling Party is the product of two cycling and board game enthusiasts, Leandro Pérez and Diego Hernando. You can find information about the game on their website, www.cyclingparty.com, follow them on Twitter, and help fund their game on Kickstarter.

The game’s simplest version, the junior game, does a great job of teaching the basics of bicycle racing. For example, riders can be in three situations — in the big group of riders, the peleton, a smaller group, the paceline, or alone in a breakaway. In each setting, how far and fast the racers go is determined by rolling two dice but the results are interpreted in different ways — ways that make sense given how things actually work in a race. Riders in the peleton generally move together at the pace of the fastest rider (the highest roll) in the group. Only an extraordinarily good or bad roll will see a rider fall off the back of the peleton or escape away from it. In a small group, a paceline, the riders will still generally stick together  but it takes less to break the group apart. A difference in roll of only four will see one rider move ahead or behind the group. When a rider is all alone, his pace is up to him and him alone. In the real world, this means that a group will almost always catch a lone cyclist because the group can trade off the hard work of leading the pack. In the game, the group moves at a pace set by the highest of several rolls while a lone cyclist only gets one roll. The junior version of the game recognizes the difficulty of climbing mountains by forcing every rider in a peleton or paceline to act like a rider in a breakaway — moving only at their own pace — on mountain roads. It’s a clever way of teaching beginning cycling mechanics while also creating a compelling game.

The senior game adds specialized roles for riders into the mix. Players designate riders as sprinters, climbers, roulers (cyclists who are good at everything,) flat domestiques, mountain section domestiques, and lanterne rouges (basic riders.) Each type of rider has slightly different variables which modify the effect of the die rolled for them each term. The senior game also adds some tactics other than go-very-fast to the game: attacks, retreats, and risky descents abound.

To the excellent gameplay of the junior and senior games, the last version of the game, the master game, adds the element of a multi-stage tour to the mix. Cycling’s greatest and most popular race is the Tour de France. Run annually since 1903, the Tour de France is run (rode) in 21 stages over 23 days. It covers more than 2,000 miles each year. The brilliance of the race, from a fan’s perspective, is that it combines amazing physical feats with interesting one-day tactics and team strategies that bridge the race from stage to stage. The master version of Cycling Party tries to emulate that. I’ve always found the season or campaign version of sports games to be the most compelling. The length of these modes give your imagination a chance to run its course and get attached to the imaginary athletes you control.

I love the way Cycling Party demystifies the physical realities that drive professional cycling and puts players in the place of team managers and riders, forced to make tactical choices to win the race. Help make the game a reality!