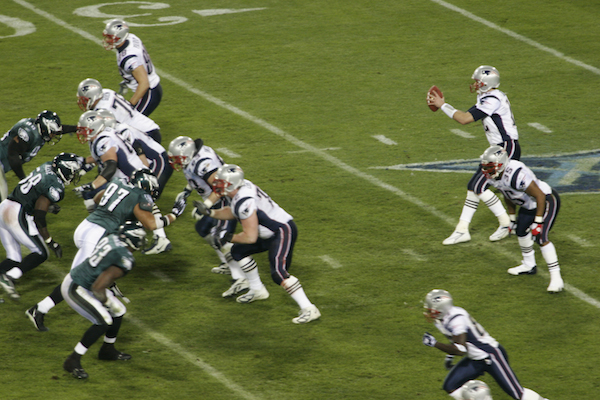 Football is one of the more opaque sports to the uninitiated. It’s easy for someone who is curious about football but not an insider to look at a game of football on television and see nothing more complex than two lines of people smashing into each other. Once beginning viewers understand some of the basics of how football works: how the snap works, what down and distance are, and what roles the quarterback, running backs, and wide receivers play, they tend to focus on those positions when watching football. Honestly, watching the quarterback, running back, and wide-receivers is how lots of people watch football, even the most passionate football fans. There’s nothing wrong with that. Following the ball on its path from center to quarterback to running back or wide receiver is a great way to watch football. As someone who is drawn to supporting roles, however, it excludes the people I’m most drawn to on the football field and it never breaks down that initial interpretation of football as a brutish sport with lines of enormous men smashing into each other. The run/pass game is a trick that I use to unravel exactly what’s going on between those lines of giants. It focuses my eye on the supporting cast of football and helps me gain a greater appreciation for the sport. Here’s how it works.

The start of each play in football is like the opening of a play or the start of a chess game. The players are in place but the drama has not yet begun. Given the speed and violence of every football play, perhaps the better metaphor is a pair of old fashioned duelists waiting for their second to drop a handkerchief signaling them to start fighting. In any event, the two teams line up opposite each other, separated by an imaginary “line of scrimmage.” Here’s what it looks like: 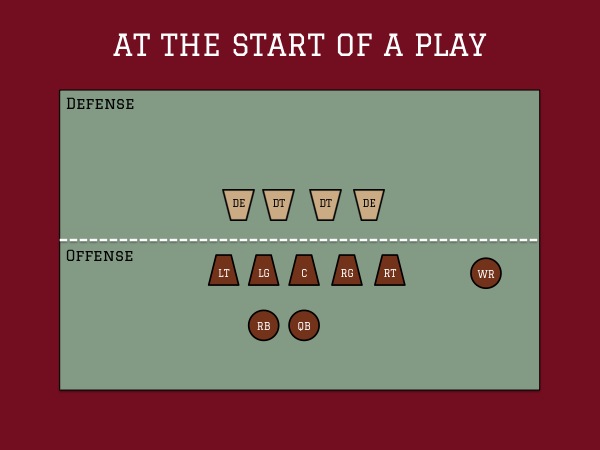 You’ll notice that the offense far outnumbers the defense in our diagram. That’s not the case in real life, of course, but I’ve simplified things for our purposes. The game we’re going to play involves predicting as quickly as we can whether the offense is going to try to pass the ball or run it. On a pass play, the quarterback takes the football, drops a few yards back, and then throws it to a wide receiver who has been running deviously around the field trying to get away from defenders. On a run play, the quarterback gives the ball to a running back who takes off down the field, seeing how far he can get before he is tackled. That’s what you see if you watch the ball and the players who have the ball. To excel at this game of prediction, it’s way better to watch the offensive line.

The offensive line are a group of five super-sized humans. There’s the center, who starts each play with the ball. There are two guards, one to either side of the center and two tackles who line up on either side of the guards. This unit works together to protect the quarterback on pass plays and to create prearranged lanes for the running back to run through on running plays. With a few exceptions, when the offense is going to pass, the offensive line moves backwards, giving ground in order to buy the quarterback time to throw before being tackled by defenders. This is what that looks like: 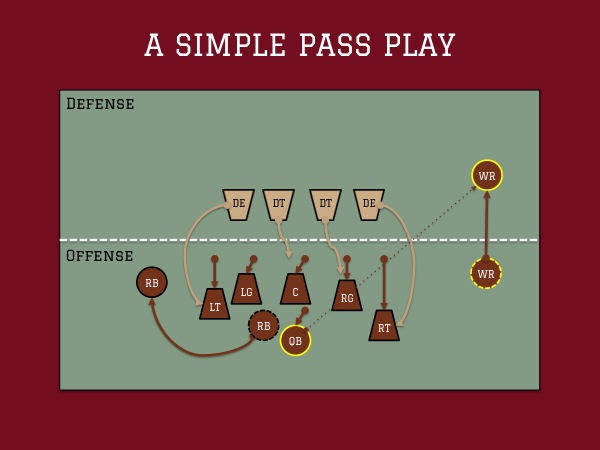 Notice how the offensive line moves backwards, creating a little protective area called the pocket for the quarterback to stand in while the wide receiver runs down the field and gets in position to catch the ball.

On a running play this dynamic is reversed. The offensive line fires out of their stances to start the play. They don’t have to worry about protecting the quarterback because as soon as he gets the ball, he’s just going to hand it to the running back. Nope, during a running play, the offensive line moves forward, trying to knock the defensive line backwards or trying to push them left, right, or divide them so the running back can run through and get into the second or third level of defenders, the linebackers and defensive backs. Here’s what this looks like on a run play: 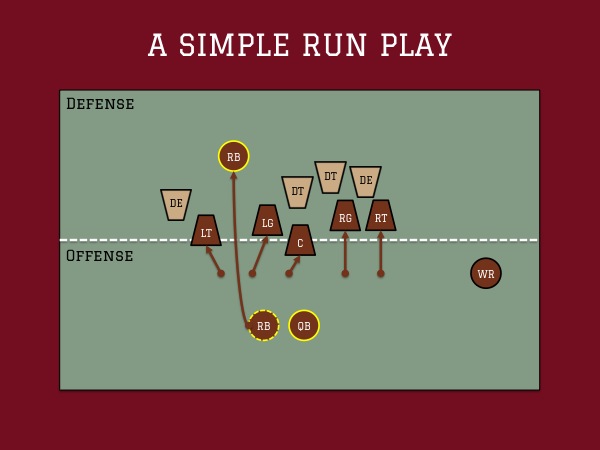 There are two key exceptions to the back = pass, forward = run rule. Both exceptions play off the expectation that those rules will hold true. A draw is a run that begins with the offensive linemen moving backwards as if for a pass. They draw the defensive linemen towards them so that when the quarterback gives the ball to the running back, he can run through the space vacated by the defensive linemen. A play-action pass is the opposite of a draw. Instead of being a running play masquerading as a passing play, the play-action pass sees the offensive linemen pretend that it’s a running play while the quarterback continues the deception by pretending to hand the ball to the running back. Instead of handing it off, the quarterback holds on to the ball and throws it to a teammate who hopefully has been left open by a completely faked out defense. The draw play and play-action pass are tricky exceptions that prove the rule.

Play the run/pass game at home with your family or out with your friends. Let me know how it goes!

One thought on “Learning to watch football: the run/pass game”