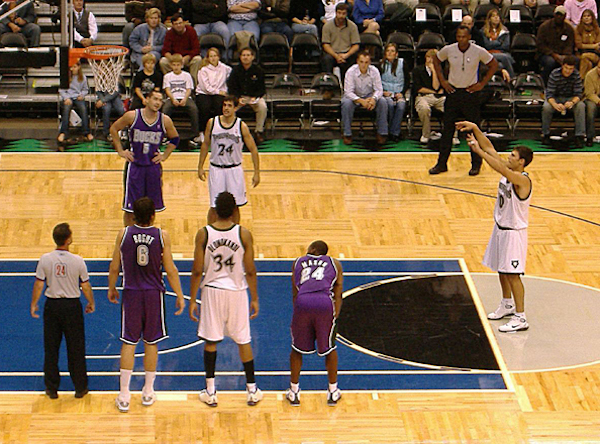 What is the key in basketball and why is it called that? I don’t watch a lot of basketball but I was watching with a girlfriend of mine who is a Memphis Grizzlies fan and I kept hearing her shout about the key.

The key is one of the name given to an area below and in front of the basketball hoop. It’s also commonly called the paint or the lane. That area is special because players in it have to obey slightly different rules than those outside of it. It’s called the key because when it was first instituted in 1936 it was shaped roughly like a… well, not a key honestly, but an old fashioned key hole — a narrow rectangle opening up into a circle. Over time, the area has been enlarged, specifically the rectangle at the base of the key, until the circle at the top is either the same width as the rectangle or smaller. Here are the rules that apply differently within the key:

I’m not sure who first called this area the key. In the NBA rule book, it is referred to as the “free throw lane”, a term you’ll basically never hear any living, breathing basketball fan use. Nonetheless, it’s a nice coincidence or a clever pun because the key has a double meaning. Now you know about the original shape of the free throw area but as you watch or play more basketball, you’ll quickly realize that the key is often the key to who wins and who loses. Shots from within the key are the highest probability shots. Most rebounds are grabbed by players within the key. Just dribbling hard into the key often results in free throws for the team that does it best. Your friend’s favorite team, the Memphis Grizzlies, have two dominating big men, Marc Gasol and Zach Randolph who are masters within the key. If she was shouting about it, my guess is that she was celebrating their dominance.