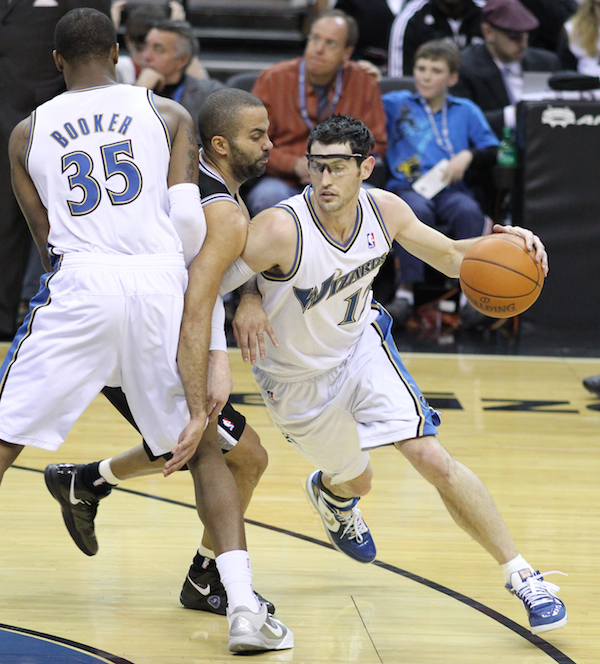 What is a pick and roll in basketball? I hear about it all the time when I watch NBA games but I don’t think that I understand it 100%. Can you help?

Principle 1: It’s very hard to get away from a defender in basketball. Basketball courts are not that big and, at least in high-quality leagues like the NBA, WNBA, FIBA, and college basketball, opponents are of relative equality in terms of athletic ability. Sometimes, if there’s a scramble on one end of the court and the defense gets the ball and is able to quickly transition to offense, you will see players running on offense free of a defender, but most of the time, defensive players are never more than a step from an offensive player.

Principle 2: It’s hard to score if a defender is close by. This is true at all levels of basketball. In my own rec-league basketball experience, I get almost totally paralyzed trying to shoot if a defender is near me. Even professionals find it much more difficult to score with a defender close to them. Even if the defender doesn’t block the shot, they will likely be able to “alter” the shot (force you to shoot at an angle you’re not comfortable with) by “contesting it” by sticking their hand in your face or near the natural release point of your shot as you’re shooting.

One natural conclusion from these two principles is that any tactic that creates even a little bit of separation between an offensive player and her defender is a valuable one. The pick and roll does this through creating an obstacle on the court that defenders have to run around. The play involves two attackers and two defenders. One attacker has the ball and one does not. The offensive player without the ball stands still (basketball rules prohibit intentionally getting in someone’s way unless you’re standing still.) The player with the ball dribbles quickly towards the player who has transformed into an obstacle and passes very, very close to him or her, on the side farthest from the basket they are trying to score on. This is the first half of the play. The player on offense without the ball has just executed a pick by standing still and allowing the ball-handler to run around him. Before we move on to the second half, let’s examine what this first half has done.

Now that you understand the plight a good pick puts a basketball defense in, we can move on to the second half of the pick and roll, the roll. As the ball-handler goes around the player setting the pick, the player setting the pick turns and runs towards the basket. That’s the roll. This serves to turn up the pressure on the defense even farther and opens up an easy option to score for the offense. The rolling motion forces a defender to go with the picking player, who, until recently was just a static obstacle. That way, regardless of what the defense does, but particularly if the defense switches, there’s a good chance that the player who just set the pick will be open for a pass that leads him towards the basket for an easy layout.

If you want to see how these options work in real, three dimension life, this instructional video filmed by the 1980s Boston Celtics is an awesome way to learn:

Finally, why is it called a pick and roll? According to the Online Etymology Dictionary this use of the word pick could come from its meaning of “a blow with a pointed instrument.” In basketball terms, the pointed instrument is the player setting the pick and the blow is the easy basket that often follows. As for the roll? Well, that’s the motion of the player who sets a pick and then rolls their body towards the basket.