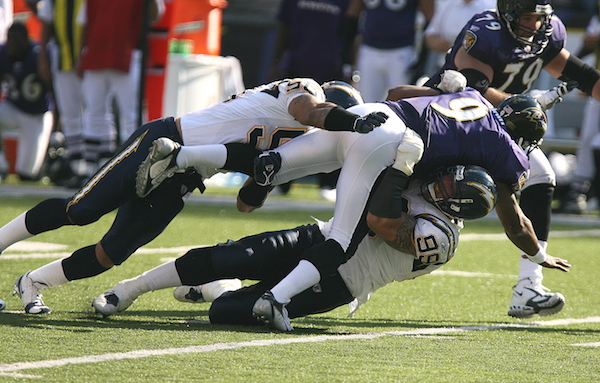 The sight of a football player knocked senseless or woozy during a game is common. For years, the culture of football was to celebrate the roughest elements of the game, including those that caused concussion symptoms like these. Of course, the word concussion wasn’t used, players were “dinged up” or “had their bells rung.” Concussed players rarely left the field, and if they did they were back as soon as they could walk straight. Today the way we observe, comment on, and handle brain injuries in football is very different. Now when a player goes down, we gasp, avert our eyes, and talk in hushed voices. We know now that brain injuries have serious short and long-term consequences. They can cause the toughest football players to seize up, be unable to tolerate sunlight, or vomit uncontrollably. In time, they can cause personality changes, aggression, and dementia.

What has changed? Well, we know more about brain injuries and their effects thanks to some powerful investigative reporting and promising scientific work led by the New York Times and Boston University respectively. The twin forces of knowledge and focus shifted public opinion but have not necessarily conveyed the full story in an easily understandable way. If you’ve ever wanted to understand what’s really going on when a brain is injured and how that pertains to football players, here is a summary.

Brain injuries are generally categorized into two groups: concussions and subconcussive events. Both are caused when a person’s head moves rapidly enough for the brain inside to scrape or hit the inside of the skull. In football, this is often the result of a blow to the head from another person’s body or the ground, but it can also happen if the head moves fast enough, even without impact. Of course, every injury is unique but it helps to classify them.

It’s hard to know how many concussions there are in the NFL and in other levels of organized football. Estimates range widely mostly because players and teams both have incentives to not report concussions as they happen. The NFL reported 228 concussions in the 2013-14 season, down slightly from 261 and 252 in the previous two seasons. That means every time a player steps on to a football field, (and 96 do, per game) he has a roughly 1 in a 100 chance of getting a concussion. Just from having watched a lot of football, that frequency feels about right. That would mean there is one reported concussion (too obvious to hide) in almost every game.

Football players certainly suffer concussions at a greater rate than normal people. They also suffer broken bones and torn ligaments at a significantly higher rate than normal people. Broken bones and torn ligaments never have and never will be seen as a pernicious element that could conceivably bring down football. The real problem is that a statistically significantly higher percentage of football players experience another set of physical and psychological symptoms that are almost definitely tied to brain damage. We are now morally certain that these symptoms are the result of a neurological disease called Chronic Traumatic Encephalopathy, or C.T.E., and that it has been caused by concussions or other brain injuries suffered while playing football. The New York Times, which did a lot of the earliest and best reporting on C.T.E. thanks to the work of Pulitzer Prize nominated journalist, Alan Schwarz, described C.T.E. as “a degenerative and incurable disease”. Here is the best description of the four stages of the disease from an article by Schwarz’ colleague Ken Belson:

Those categorized as having Stage 1 of the disease had headaches and loss of attention and concentration, while those with Stage 2 also had depression, explosive behavior and short-term memory loss. Those with Stage 3 of C.T.E…. had cognitive impairment and trouble with executive functions like planning and organizing. Those with Stage 4 had dementia, difficulty finding words and aggression.

The popular science author Malcolm Gladwell has also had a big influence on this issue. Gladwell wrote an article about brain injury in football which was published in the New Yorker in 2009. This article was the first one to shift my thinking about the game and it is well worth reading despite its relative age. Here is a quote from the piece which builds on the description of symptoms above:

C.T.E. has many of the same manifestations as Alzheimer’s: it begins with behavioral and personality changes, followed by disinhibition and irritability, before moving on to dementia. And C.T.E. appears later in life as well, because it takes a long time for the initial trauma to give rise to nerve-cell breakdown and death. But C.T.E. isn’t the result of an endogenous disease. It’s the result of injury.

Scientific and medical understanding of C.T.E. has come a long way but it’s still not entirely clear whether concussions or subconcussive events are the main cause of the disease. It’s understandably difficult to figure this out given that almost all football players will experience both types of brain injuries during their careers and that until recently even concussions with fairly dramatic symptoms were largely treated as an unavoidable consequence of playing football which was best ignored.

One of the biggest obstacles to learning more faster about C.T.E. and the brain injuries that cause it is that the disease can only be conclusively diagnosed by examining the brain after death. During a special autopsy, scientists are able to see if the brain shows the degeneration and accumulation of a protein called tau that are characteristic of C.T.E.. As heart-wrenching as it has been to read stories about the handful of football players who have shot themselves in the chest and left instructions for their brains to be studied, they and other players whose families have donated their brains posthumously, have been responsible for virtually everything we know about the disease so far. Luckily, there is some movement on this topic. Researchers at the Semel Institute for Neuroscience and Human Behavior at UCLA have been able to detect evidence of C.T.E. in living brains through the use of a particular dye and a “routine positron emission tomography scan.” In a 2013 Wired article on the topic, Sean Conboy writes that this test “also could help settle the debate over whether CTE is exacerbated by a few major concussions or years of exposure to subconcussive blows. And it could answer the most important question of all: How much tau is too much?

Another facet of testing that is rarely talked about is genetic testing. David Epstein explains in his book, The Sports Gene

, that there is a single gene called ApoE that is predictive of Alzheimer’s disease as well as “how well an individual can recover from any type of brain injury.” There are three variants of the gene and everyone has two copies, one from their mother and one from their father. One variant, ApoE4, is particularly bad. People with one copy of ApoE4 are four times more likely than the general population to develop Alzheimer’s, and people with two copies are eight times more likely. Nothing has been proven about any connection between ApoE4 and C.T.E. but, given that people with copies of that gene variant “take longer to recover” from brain injuries and “are at a greater risk of suffering dementia later in life,” it seems likely.

As it stands today, the only sure thing is that C.T.E. is horrible and deadly. Until we know otherwise, I am going to assume that all blows to the head or which cause the brain to hit the skull contribute to the potential development of C.T.E. and that the more violent the impact, the larger its negative consequence. Until the day (and that day may never come) when science can definitively predict which injuries and which players are on the road to C.T.E. and medicine can prevent those players from getting the disease, football has a responsibility to understand how players are injured and to find ways to reduce or eliminate the danger.

This is the first post in a series of posts about brain injuries in football and how to fix the sport. In our next post, we’ll discuss how brain injuries or concussions happen. What kinds of hits cause them? Why do players escape some collisions unscathed and stumble away from others?

Dear Sports Fan provides resources for living in harmony with sports. If you enjoy our content, please share it with your friends and family. If you haven’t signed up for our newsletter or either of our Football 101 or 201 courses, do it today!