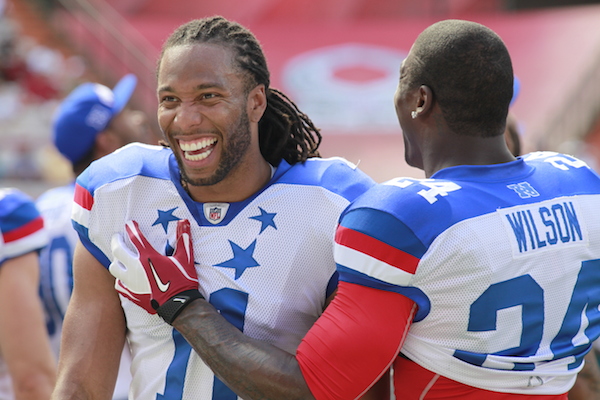 If you’ve ever watched a football game on television, you know that some football phrases are a little… umm… dirty sounding? The internet is littered with websites that celebrate these phrases but very few of them actually explain what they mean in the context of football. Not to worry, here are simple explanations of the top ten dirtiest phrases in football. We want you to know what they mean so that you can feel free to giggle at them without restraint!

During every football play, there are eleven players on the field for each team. Of the eleven players on the offense, only six are eligible to catch a forward pass. The other five are ineligible. Illegal touching is a penalty called against the offensive team if one of the five ineligible players catches or intentionally touches a football thrown forward by the quarterback. An eligible receiver can make himself ineligible by running out of bounds. If an eligible receiver runs out of bounds, returns to the field, and catches a pass, it’s also illegal touching.

Illegal use of the hands

Illegal use of the hands sounds dirty for the same reasons as illegal touching, but it’s a completely different penalty. Instead of mandating how a player can touch the ball (like illegal touching does), this rule mandates how players can touch each other. Mostly this means that players, with the sole exception of a player running with the ball, cannot use their hands to hit each other in the face, neck, or head.

There’s no denying that for many, admiration of football players’ butts is a big part of the enjoyment of watching football. However, that’s not what the phrase “tight end” refers to. Tight end is a position on the offensive side of football. If you picture a football field right before a play starts, there are usually a group of big dudes on the offense lined up parallel on the line of scrimmage where the ball is. It’s customary for five of these players to be offensive linemen; the center, the guards on either side of him, and the tackles on either side of the guards. There is often a sixth man on the line. This is the tight end and he plays a hybrid position, blocking like an offensive lineman sometimes and looking to catch passes like a wide receiver at other times. They are called the tight end because they start each play as the receiver closest (tight) to either side (end) of the offensive line.

Jumping into the sack with a consenting partner should be great fun for both parties but a sack in football is only fun for one side. In football, the use of the word sack is more akin to an invading army that sacks a castle than sack referring to a bed. Defenders sack the quarterback if they tackle him to the ground while he is holding the ball. Sacks are a big deal because they are one of the few ways a defense can force the offense to start their next play with the ball farther from the end-zone they are trying to score in than where they started. As a bonus dirty sounding phrase, a strip sack is when a defender knocks the ball away from the quarterback while he is tackling him to the ground.

Penetration in the backfield

The word penetration has been falling in popular use steadily since 1982 which makes it all the more jarring when you hear it during a football game. In football, a defensive team is said to penetrate the backfield when one of their defenders pushes through the offensive line trying to block them. Like with sack, the metaphor of a castle siege is helpful. Think of the offensive line as the castle walls and the player with the ball — quarterback or running back — as the prize the defenders are trying to get. When a defensive player breaks through that wall, he has penetrated. The area behind the offensive line is called the backfield — which is why the players who start the play back there are called quarterbacks, fullbacks, running backs, and halfbacks.

So far we’ve used the metaphor of a castle wall to describe a team’s offensive line. On running plays, when the offense is planning to hand the ball to a running back who then sprints towards the end zone, the offensive line transforms from a wall to a series of bulldozers. Individually and as a unit, they attempt to block, shove, push, and trick the defenders opposite them in particular, predetermined directions. Their goal is to create lanes clear of defenders for their running back to sneak through on his way down the field. From the running back’s perspective, these lanes look like openings or holes in the virtually solid mass of humanity on the field. A running back who takes advantage of one of these holes by running through it is said to have hit the hole.

Calm down Prince fans, this phrase is about control but only in terms of the positioning of defenders on a football field. In our post earlier this year about identifying the mike linebacker, we learned that many terms on both sides of football are relative as opposed to absolute. That makes sense because the offense has to plan a play that’s flexible enough to adjust to whatever the defense is running and vise-versa. One way defenses do this is by labeling the space between offensive linemen, centered on the center who starts each play with the ball. The space between the center and the players on either side of him are called the A gaps. The next two spaces between offensive linemen are called B gaps and after that, C gaps. During a defensive play, a defensive player may have the responsibility of trying to get through one of these gaps to sack the quarterback or to plug one of the gaps and make sure the offensive line cannot move him to create a hole for their running back. A defender shows gap discipline when he sticks to his assignment despite seeing something that could tempt him to leave and chase another opportunity. Offenses love to trick defenders away from their assignments with clever fakes and then punish them for their lapses.

Although football players do sometimes have wardrobe malfunctions during the game, getting stripped refers to a player who loses the ball, not his pants. Holding on to the football is the primary responsibility of every player who handles the ball because losing it can be an enormous mistake. A ball that is lost or fumbled is up for grabs and if the defense grabs the ball, their team gets to switch to offense on the next play.

In the last two weeks, because of Deflategate, we’ve heard enough sophomoric ball puns for a lifetime. Ball skills is a common football phrase that refers to the abilities of a wide receiver or defensive player to catch the football, even while moving at full speed through a chaotic environment. Many football players have remarkable ball skills. The greatest example of ball skills during this past season was this stunning catch from New York Giants wide receiver Odell Beckham Jr. Quarterbacks also demonstrate their ball skills by convincingly executing fake hand offs or fake throws.

Double teaming in football is when two players are assigned to either attack or defend a single member of the opposing team. This could be two defenders covering a single wide receiver to prevent him from catching the ball or two offensive linemen blocking a single defensive lineman from getting to the quarterback. In any scenario, spending two of your players to deal with one player on the opposing team is risky business. It means that somewhere else on the field, your team is likely to be outnumbered. Some players like defensive lineman J.J. Watt or wide receiver Calvin Johnson are so dangerous that they get double teamed on almost every play. Not only are they frequently still able to make plays, but by forcing the other team to double team them, they make it easier for their teammates to succeed.