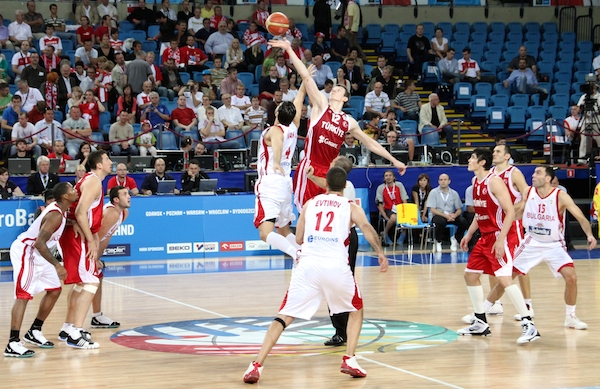 How do basketball games start? I know there’s a jump ball to begin but I don’t really understand how it works and what it decides.

Every college and NBA basketball game begins with a jump ball. During a jump ball, two players stand on either side of a referee who then throws the ball up between them. Once the ball has reached the highest part of its arc, it is then free to be touched. Both players attempt to tip the ball to one of their teammates who are set up around the jump ball in a circle with alternating players on each team. Once the ball is tipped, it’s a free-for all. Whichever team gets the ball, gets the ball.

Basketball games in the NBA and WNBA start with a jump ball. There isn’t a jump ball at the start of each quarter, instead the initial jump ball is used to determine who gets the ball to start each of the other three quarters. The team that loses the initial jump ball gets the first possession of the second and third quarters. The team that gains possession of the jump ball to start the game also starts with the ball in the fourth quarter. I’ve never seen a study which tried to figure out whether it was actually better to win the jump ball and get the ball in the first and fourth or lose it and get it in the second and third. My guess is that it’s insignificant because of the high number of possessions overall (around 200) in each game.

The jump ball is not a unique feature of sports. It is a little bit like a face off in hockey or lacrosse, although in both those games the ball/puck is either dropped down onto the ground or begins on the ground. In all three sports, the goal is to start play with both sides having an even (or close to even. In hockey the home team gets a small advantage) chance of gaining possession of the ball. In lacrosse there are face offs at the start of the game, at halftime, and after every goal. In hockey, face offs are quite common, and are used whenever play needs to be restarted after a whistle.In basketball, jump balls are much more rare. In many games, the jump balled used to start the game, sometimes called an opening tip, will be the only jump ball during the game. In the NBA and WNBA, jump balls can happen during the game if there is a “tie-up” when two players from opposing teams seem to simultaneously have possession of the ball. When that happens, the referee stops play and those two players compete in a jump ball to see who can get the ball. This is better than allowing the game to dissolve into a wrestling match but it does sometimes result in some pretty funny looking jump balls between players of very different heights.

The jump ball hasn’t always been rare. Before the 1930s, it was used just like a hockey face off is, to restart play after almost every stoppage. Think about how often that must have been in as high scoring a sport as basketball! This was before the shot clock had been implemented, so basketball wasn’t as high scoring as it was today, but there still must have been a lot of jump balls. Winning jump balls would have been an important skill to have because a team that was good at it could have gotten possession of the ball, scored, and then gotten possession right back again. Today, the jump ball is archaic and almost extinct. It’s not used in college basketball or international basketball except to start the game. If there is a tie-up during a game in college or internationally, one team will get the ball and then the next time it happens the other team will. This is called alternating possession. Although equally fair, there’s something more pleasing to me about the jump ball. I hope it doesn’t disappear completely.