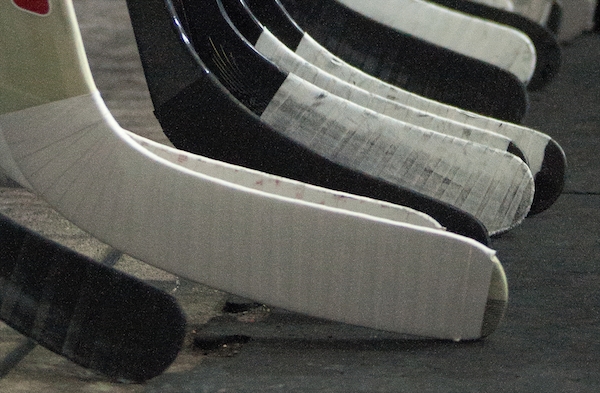 I’ve got a question here — why do hockey sticks break? It seems like they break all the time and whenever they do its bad for the player whose stick breaks and the team he’s on. Why don’t they just make stronger sticks?

Although hockey sticks don’t actually reproduce, you can think about their design as being under a type of evolutionary pressure. Professional hockey is an extremely competitive landscape, not just among teams, but among players looking to secure spots on one of the 30 NHL teams. Ineffective players will be dropped and replaced quickly. One thing that ensures that a player will be ineffective is a bad stick. Players who want to get and keep a job playing hockey have an interest in getting the best stick possible. Over time, what has generally been accepted as the best way to make a stick has changed.

The first hockey sticks were made of wood. This is traditionally the material we think of when we say the word, “stick” after all. Wood sticks remained standard throughout hockey until the 1970s when companies began experimenting with other materials like fiberglass and aluminum. Aluminum took over as the stick du jour throughout the 1980s. These sticks were made of two pieces, a shaft, and a blade that fit into the shaft. The benefit of the aluminum stick was that it almost never broke — one shaft might last the lifetime of several replaceable blades — and its production cost was much lower than the traditional wood process. The downside was that the sticks didn’t perform quite as well as wood ones. They produced less accurate and weaker passes and shots. The major reason for this is that aluminum is not as flexible as wood, at least not under the type of pressure that a hockey player can generate when shooting or passing. So, beginning in the 1990s, the favored material migrated once more from aluminum to a mixture of materials: graphite, carbon fibre, and titanium, among them. At first, these sticks followed the two-piece design of their aluminum predecessors, but soon their designers realized that they could use the extra malleability of the new materials to create a one-piece stick. The result was the one-piece composite material sticks that are most popular today.

These new hockey sticks have all of the benefit of wood’s flexibility and feel with significantly less weight. It’s also much easier to create batches of identical sticks when you’re creating them in a lab or factory than in a wood-shop out of natural material. Modern sticks are much easier to control. The only downside of these sticks is that they break. As you said, it’s pretty common to see sticks break in an NHL game. And when they do, it can be a big problem for the player and their team. Aside from goalies, it’s illegal for a player to play with a broken stick. This is pretty clearly a safety issue, even more so now with composite sticks than the original wood ones. So, when a player breaks his stick, he has to drop it immediately and his effectiveness on the ice is severely limited until he can get a new stick or get off the ice. I wrote a post a few weeks back about why you’ll sometimes see one player give her stick up to a teammate in this situation. A lot of people claim that the new sticks break more than the original wood sticks. The Wikipedia post on sticks denies this, claiming that wooden sticks actually had slightly shorter lifespans.

In any event, whatever the nature of the stick, the essence of your question is: why not design a stick that won’t break? The answer is that if you made it strong enough to never break, it wouldn’t make a very effective stick. A hockey player relies on her stick to bend, sometimes more than you would imagine it bending, especially when taking a slap shot. Unlike a wrist shot, whose strength is the quickness a player can release it with and its accuracy, a slap shot is a power tool. During the action of a slap shot, the stick bends against the ice and then springs off of it, more like a slingshot or a bow than a baseball bat. The ability to bend and therefore the risk of breaking is essential to a hockey stick’s utility. The best way to understand this is to watch it in slow motion:

Having a stick break in the middle of a game is a pain but it’s not as damaging as not being able to shoot it like that!