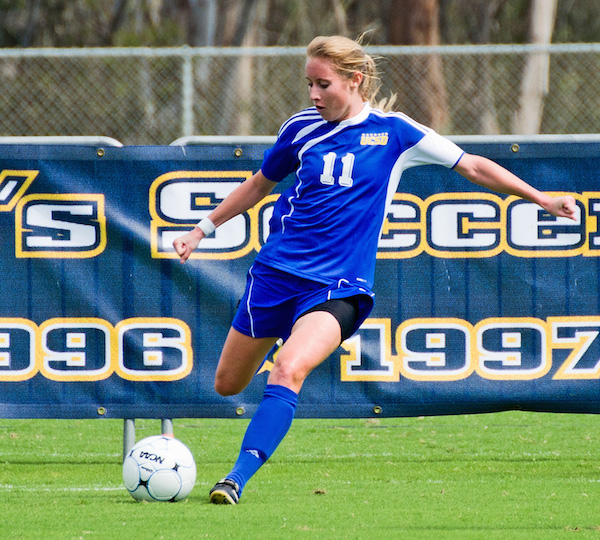 Imagine you’re a striker. Your sole purpose in soccer and perhaps in life is to score goals. You are single-mindedly devoted to goal-scoring in the lowest scoring popular sport in the world. When you score, you are the hero of all heroes. If you don’t, you are the greatest failure in the history of the world… for that week, at least. Strikers should be fast, fast enough to run by defenders. They need to be strong, strong enough to fend of defenders who are often bigger than them. Forwards also need excellent ball skills, deceptive enough to fake defenders out and sure enough to hold onto the ball despite being surrounded by three, four, or five opposing players. It’s no surprise that strikers are typically the most temperamental players on the soccer field. Since they’re most often in a position to earn their team a penalty kick by being fouled, they’re usually the most frequent divers or “foul simulators” in the game. Strikers are dependent on their teammates to pass them the ball, a job which is actually called “providing service.” Like Wide Receivers in American Football, this doesn’t encourage them to be nice, humble, cuddly people, but instead it encourages flamboyant, self-aggrandizing, lunatics. Above everything else, the best strikers in the world have amazing instincts. They seem to know where a ball is going to bounce and how to kick it through and around the sea of legs to score a goal. They have a seemingly supernatural ability to accelerate and sprint by a defender just when he’s least expecting it.

Soccer people sometimes use numbers to refer to positions. Strikers may be referred to as number nines if they play in the center of the field and 11s if they play on one side or the other.

The center forward is the prototypical attacking player, so they are usually referred to simply as strikers. Strikers have a lot of flexibility about where they play, so you may see one on either side of the field, but their natural hunting ground is the center of the field. A great striker should be the fastest sprinter on the field. During most of the game, a striker will meander around the back line of the opposing team, probing for weaknesses. At opportune moments, she will sprint between defenders, trying to time things just right, so that she is a step ahead of the defender when she receives the pass but not offsides. Once the striker has the ball and sees a clear path to the goal, his instincts take over and every nerve and muscle in his body is devoted to scoring. Rifle a shot past the goalie or dribble around him and what awaits is the glorious feeling of seeing the ball hit the back of the net. Strikers should also be proficient at heading the ball into the net.

Scoring in virtually impossible in soccer. Just moving the ball up the field while maintaining possession is difficult. Teams that deploy a target forward try to establish an attacking position by sending her up the field and then attempting long passes. A target forward will establish a position, turn her back to the goal she’s trying to score on, and then make herself available to receive a pass. The target forward uses his (usually big and strong) body to shield the ball from people on the other field, protecting it for long enough for his teammates to run up the field and join him. In this role, a target forward’s job is still to create goals, but she’s not necessarily the one who will score the majority of them. A good target forward is adept at flicking nifty passes to their teammates who are running towards goal.

In formations with two or more strikers, there’s often one player who plays less centrally than the other. This player is referred to as a winger because he or she spends more time closer to the side or the wing of the field than the center. Wingers are usually smaller and faster than their central attacking counterparts. They are less frequently used as the target for a long pass up the field or a cross swinging into the center, so their ability to out-jump and out-muscle defenders is not as important. Instead, wingers are crafty, quick, and manipulative. They are the masters of the dark arts of attacking soccer: how to time a run just right to beat an offsides trap, how to win a set piece by playing the ball off a defender’s leg and out of bounds, or by how to trick a referee into calling a foul.