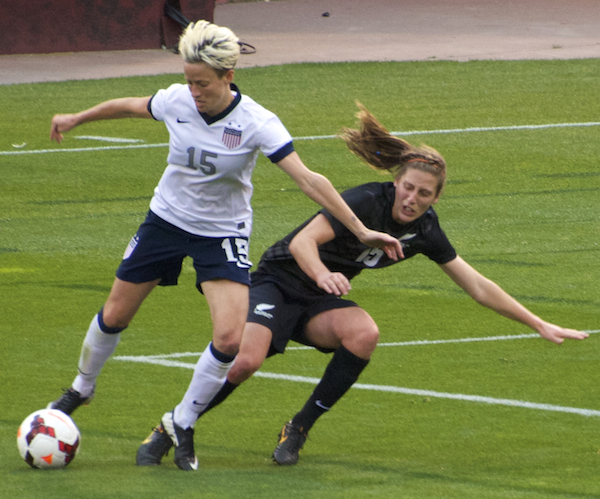 National team experience: 102 appearances, this will be her second World Cup, and she has 29 international goals.

What to expect from Megan Rapinoe: Every player on the U.S. national team is a great soccer player. Every player in the World Cup is probably better than anyone you or I have ever played with. But there’s something different about the few players who are truly world class. World class players just look different from everyone else. They have at least one skill that virtually no one else can match. Megan Rapinoe is a world playmaker. She has exceptional vision. Vision literally means the ability to see the field, and I wouldn’t be surprised if Rapinoe has exceptional vision in one way or another, but it also means the ability to understand where every player on the field is and to anticipate where they are going to be. This is truly where Rapinoe excels. She seems to know exactly where to put the ball. Her other exceptional skill, quite handily paired with vision, is her technical ability to pass the ball to just the spot she wants. In the flow of play, Rapinoe’s approach to playing midfielder is acquire the ball, survey the field, move the ball to the player in the position most dangerous to the opposing team. Rapinoe takes the majority of the more technical set pieces, including corner kicks. Her skill on the ball allows her to be a formidable goal-scorer, especially on shots from a distance, but it’s not her primary focus. Rapinoe missed the team’s last warm-up game with a thigh injury. How much we see her on the field during this World Cup depends a lot on her health. The more she can play, the better it will be for the U.S. team’s chances.

Video: This goal, the latest scored in World Cup history, gives me chills every time I see it. Its sheer improbability has a lot to do with the skill involved in Rapinoe’s cross.

Non-gendered personal interest item: During the 2012 Olympics, Rapinoe became the first soccer player of any gender to score a goal directly from a corner kick. Oddly enough, this type of goal has been known as an “Olympic goal” since 1924 despite having never been accomplished in the Olympics until 2012.

Links: Read Sam Borden’s fine profile of Rapinoe from a few years back in the New York Times. Check out Rapinoe’s US Soccer page, her website, and follow her on Twitter.