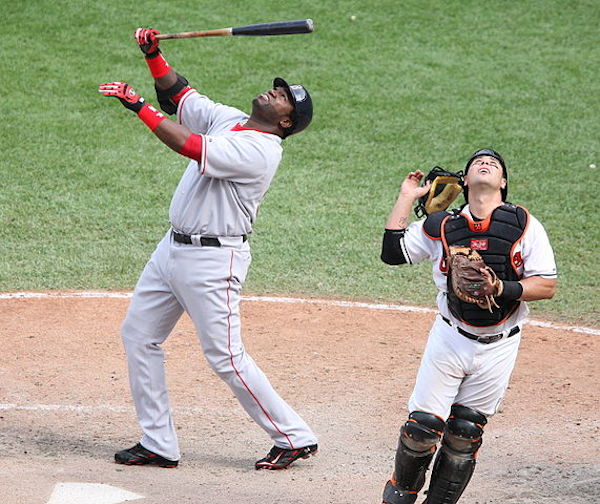 Here’s something I don’t get about sports. Why is 50% called “500” in sports? Is this some kind of metric system thing? Or is it for a purpose?

There are a variety of numbers in sports that are expressed as a number between zero and 1,000 when they more naturally might be thought of as a percentage. For example, a team that has won half its games and lost half its games is often said to be a “500 team” or playing “500 ball.” What this means is that they have won 50% of the games they’ve played. Likewise, a basketball player who scores on 38.9% of the three point shots she attempts may be said to be “shooting 389 from downtown.”

There’s nothing magical about these numbers, they’re just like percentages — a way of expressing the result from one number being divided by another. In the case of percentages, we take one number, divide it by another number, and then multiply the result by 100 and smack a percentage sign next to it. Thus one divided by two, which is .5 becomes 50%. The difference between a percentage and a sports number is that instead of multiplying by 100, sports numbers get multiplied by 1,000. At least when spoken out loud. A lot of times when you see a sports number like this written out, it will actually be written as “.500” even though no one would ever read it as “five tenths” instead of “five hundred” in a sports context.

If you always want to express a ratio to the hundredths place, it kind of makes sense to multiply by 1,000 instead of 100. It’s certainly easier to refer to something that happens three times every eight times it’s attempted as “three seventy five” than “point three seventy five” or even “thirty seven point five percent.” It’s not surprising that sports people feel that their numbers need this level of accuracy. People who live in and around sports often seem to be obsessed with accuracy to the point of over-precision. For example, players eligibly to be picked in the NBA draft tonight have their height measured down to the quarter inch with and without shoes! Commentators in many sports will often argue about whether it looks like something a player did took .25 seconds or .28 seconds. As if the commentators can actually judge a hundredth of a second difference from their perch at the top of the stadium! Because the difference between winning and losing in sports can sometimes be as slim as a fraction of an inch or a hundredth of a second it’s tempting to believe that all metrics in sports need to have that level of detail.

In defense of the sports way of expressing percentages, its historic source is a number that reasonably should be expressed to the tenth of a percent: batting average in baseball. Batting average is a player or team’s number of hits divided by their number of at bats. It’s not the best metric in baseball, in fact it’s a reasonably misleading one, but it does have a very long history. For many years, it was considered a key statistic in measuring how good a player was doing against to his current competition and for making historical comparisons. Baseball is obsessed with statistics because it creates them so nicely. Its long, 162 game season virtually guarantees that any measure one can imagine will have a statistically significant sample over the course of a year. With 30 teams and well over a dozen position players on each team, not even to mention the 120+ history of professional baseball, if you really want to know how a player’s batting average compares to his peers, you do need to take that number to the third decimal point. It would be far less interesting to say that Manny Machado and Adrian Gonzalez have the same batting average of 30% than to say that Machado is 18th in the league, with a .304 (pronounced “three oh four”) batting average and Gonzalez is 30th with a .296. Eight tenths of a percent may not seem like much, but over the course of a season (162 games times roughly 3.5 at bats per game) that’s a difference of four or five hits.

Of course, the source of the habit doesn’t matter so much if it is misapplied. Team records are the clearest form of misapplication. The problem with using this kind of number to express a team’s record is that aside from the most obvious numbers like .333, .666, and any of .000, .100, .200, and so on, these figures are very hard for us to translate into numbers in our heads. Quick — tell me how many wins and losses a team whose record is .527 has. According to the current MLB baseball standings, the answer is 39 wins and 35 losses, like the Toronto Blue Jays have. Although these numbers are convenient for creating a standings table (because they allow an easy comparison of teams who have played different numbers of games) they probably should not be displayed. In terms of figuring out how well your team is doing, the order of the teams in the standings and the games back metric are far, far better.

Regardless of how reasonable or unreasonable the sports percentage expression is, it’s deeply engrained in sports culture and seems to be here to stay. It’s easy to wonder though, if this small form of numerical manipulation makes it easier for sports people to mangle numbers in much sillier ways, like the habit of asking players to “give 110%.” That’s a story for another day.

Thanks for your question,
Ezra