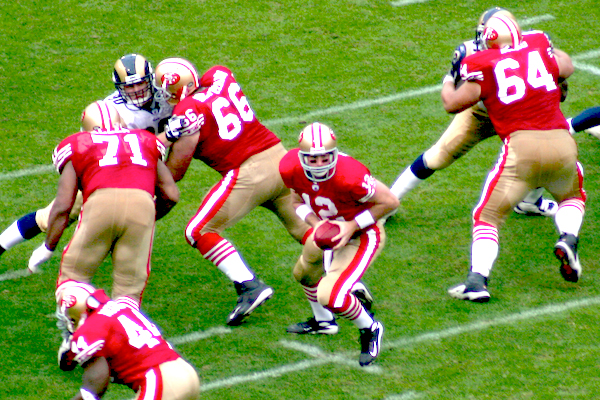 The San Francisco 49ers are members of a small circle of football teams that feel like football royalty. Especially for people whose formative football years fell between 1981 and 1998, the 49ers are synonymous with amazing coaching, great quarterbacking, and perennial winning.

Who are some notable players or figures from the San Francisco 49ers?

Bill Walsh was the head coach of the San Francisco 49ers from 1979 to 1988. Under his guidance, the team won its first three Super Bowls and went a combined 92-59-1. Football can be read as a conflict between rational, innovative intellect and brute strength and tradition. If you choose to read it that way, there’s no stronger argument for the first approach than Bill Walsh. His key innovation was to realize that short passes move the ball farther down the field than the average run play but if done by a well practiced offense, are not significantly more risky. That’s a massive simplification and, because this practice has, since the time of Walsh, become fairly routine under the name of “West Coast offense,” it may seem unexciting. At the time, it was a tactical breakthrough of Gaussian proportions. Walsh died in 2007.

Joe Montana was the first professional quarterback to benefit from Walsh’s innovative offense. It’s possible that no one has executed it better since Montana. Nicknamed “Joe Cool” and “The Comeback Kid” because of his penchant for playing well when the stakes were the highest, Montana ended his career with 31 wins when his team entered the fourth quarter of a game trailing. That’s 16% of his games! A seemingly unspectacular athlete, he was drafted in the third round of the 1975 NFL draft. He won a fourth Super Bowl in 1989 and picked up his third NFL MVP award in that game as well. [Editor’s note: I believe this was the first football game I ever watched.] Montana is widely thought of as one of the top quarterbacks in NFL history and still revered to this day.

Jerry Rice is the greatest wide receiver in NFL history. Small for a wide receiver, Rice made his plays by being more precise than everyone else and by barely ever dropping a ball that came his way. His style was perfect for the Bill Walsh/Joe Montana 49ers West Coast offense. Rice claims that his strong and reliable hands were developed as a kid when he and his brother would throw bricks two stories up at building sites to help out his father who was a mason. One of the unique aspects of Rice’s career is that he played so long that he was still actively playing in what people would otherwise have thought of as the “post-Jerry Rice era.” He retired in 2005 after 20 years in the NFL. He still owns virtually every receiving record worth having.

Where do the San Francisco 49ers play?

Imagine you’re about to go on a blind date and all you know about the person is that he or she is a San Francisco 49ers fan. Here’s what you can guess about that person. Remember that all fans are unique. We bear no responsibility for any misunderstandings we engender. Trust but verify.

Did your date just order the lobster? Don’t be surprised. 49ers fans are used to the best that life has to offer. Sure, they went through more than a decade of uninspiring teams, but their team never lost the sense of greatness that its colors and logo carry around.

What will make a San Francisco 49ers fan squirm?

Refer to the team as the “Santa Clara 49ers.” In 2014 the team moved from its traditional home within San Francisco city limits out to a new stadium in nearby Santa Clara. This was so antithetical to many local fans and politicians that a lawsuit or evan law change barring the team from using the “San Francisco” moniker was threatened before eventually being dropped.

Team colors are red, gold, and white. Their current uniforms look like this. 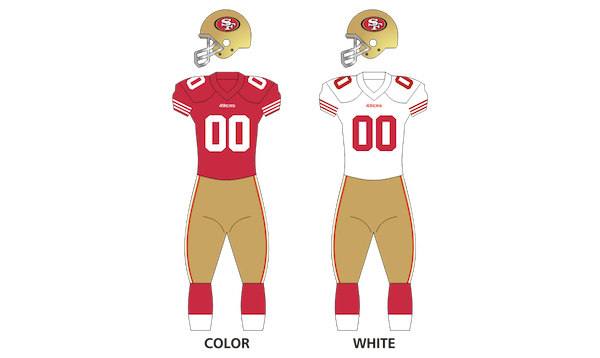 Coming soon — a post about the 2015 San Francisco 49ers including an overview of their most interesting characters as well as what fans expect from the team this year.