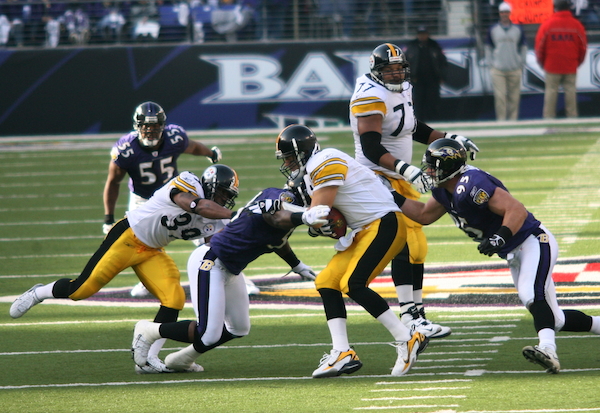 The Ravens have a very distinct image. They’re loud, aggressive, and physical. Like the Chicago Bears, their teams lean towards great defenses that can carry mediocre offenses deep into the playoffs. Unlike the Bears though, the formula has worked for the Ravens, twice in their short history. The Ravens are known throughout the league as being very smart operators from a management and player development standpoint. When they reach a point at which other teams would have to go through several years of losing while they rebuild their rosters, the Ravens seem to be able to reload quickly and keep winning. After three losing seasons to start the team’s time in Baltimore, they only had another three in the next fifteen years.

Who are some notable players or figures from the Baltimore Ravens?

Ray Lewis was the face of the Ravens franchise and the heart of their defense for most of his 17-year career with the Baltimore Ravens. Lewis was a brilliant middle linebacker and a charismatic leader. During the prime of his career, from 1998 to 2001, the Ravens had a streak of 51 games in which they didn’t allow a single player from an opposing team to rush for 100 yards. Lewis’ career was marred by an indictment for murder in 2000. The charges against Lewis were eventually dropped to a lower offense after he agreed to testify against two other people accused of the crime. Lewis’ public image took a hit but bounced back a few years later. Lewis is once again a very popular figure and a big part of ESPN’s NFL coverage.

Jonathan Ogden was drafted as the fourth overall pick by the Ravens in their inaugural 1996 draft. It was a great pick for the team. One of the tallest players in NFL history, the 6’9″ and 345 pound Ogden manned the left side of Baltimore’s offensive line for the next twelve years. An almost impossibly good player, starting in 1997, Ogden was voted into the Pro Bowl every year until he retired in 2007. He was elected into the Pro Football Hall of Fame in 2013 and became the first honoree to have played his entire career with the Ravens.

Where do the Baltimore Ravens play?

Imagine you’re about to go on a blind date and all you know about the person is that he or she is a Baltimore Ravens fan. Here’s what you can guess about that person. Remember that all fans are unique. We bear no responsibility for any misunderstandings we engender. Trust but verify.

Your date will tell you exactly what he or she thinks of those new pants you’re wearing. Ravens fans don’t hold back easily or often.

What will make a Baltimore Ravens fan squirm?

Last year’s controversy over Ray Rice will make most Ravens fans squirm in their seats. Through no fault of their own, they rooted for him for years and years, and that doesn’t feel good retroactively.

Team colors are purple, black, metallic gold, and white. Their current uniforms look like this.

A post about the 2015 Baltimore Ravens including an overview of their most interesting characters as well as what fans expect from the team this year.