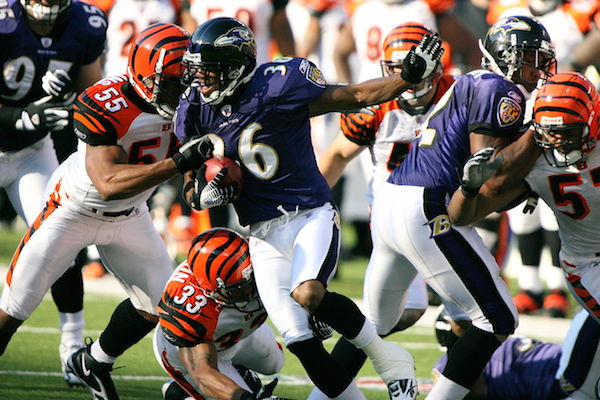 The Bengals are often referred to as the “Bungles” and, although that’s a bad joke, it’s not a bad description. The Bengals have been consistently bad throughout most of their history. They’ve made the Super Bowl twice, in 1991 and 1998 but lost both times to the San Francisco 49ers. From 1991 through 2008, the team only recorded a single winning season. The Bengals have been known for their unwillingness to spend money on players or player “luxuries” like decent practice fields and equipment. They also have a reputation for employing players who get into legal trouble. Basically, they’re a pretty giant pile of mess most of the time.

Who are some notable players or figures from the Cincinnati Bengals?

Anthony Munoz was drafted with the third overall pick of the 1980 draft. He played on the Bengals offensive line for his entire 13 season career and was one of the most popular and successful Bengals of his era. He was selected to 11 Pro Bowls in that time and was also a three time offensive lineman of the year and won both the Walter Peyton Man of the Year award and the Bart Starr Man of the Year award. He was inducted into the Pro Football Hall of Fame in 1998.

Paul Brown is the founding father of the Cincinnati Bengals. The former coach of the Cleveland Browns (who were named after him!), Brown was fired in 1963. By 1968 he had cofounded the Bengals and was firmly installed as their first head coach. He was an innovator in many aspects of the game. According to Wikipedia, he “was the first coach to use game film to scout opponents, hire a full-time staff of assistants, and test players on their knowledge of a playbook. He invented the modern face mask, the taxi squad and the draw play. He also played a role in breaking professional football’s color barrier, bringing some of the first African-Americans to play pro football in the modern era onto his teams.” Brown retired in 1975 and was succeeded in his ownership capacity by his son, Mike Brown, the current owner of the team.

Where do the Cincinnati Bengals play?

Imagine you’re about to go on a blind date and all you know about the person is that he or she is a Cincinnati Bengals fan. Here’s what you can guess about that person. Remember that all fans are unique. We bear no responsibility for any misunderstandings we engender. Trust but verify.

Your date is either from Cincinnati or really, really has a thing for cat-print clothing. The first should be easy to check. The second… may require some undercover investigation…

What will make a Cincinnati Bengals fan squirm?

Claim that the Bengal’s chant, “Who Dey?” is derivative of the New Orleans Saints’ “Who Dat?” Shockingly it seems as though the two developed in a strange case of independent convergent linguistic evolution, but that doesn’t stop people from squabbling over who had it first.

Team colors are black, orange, and white. Their current uniforms look like this.

Coming soon — a post about the 2015 Baltimore Ravens including an overview of their most interesting characters as well as what fans expect from the team this year.