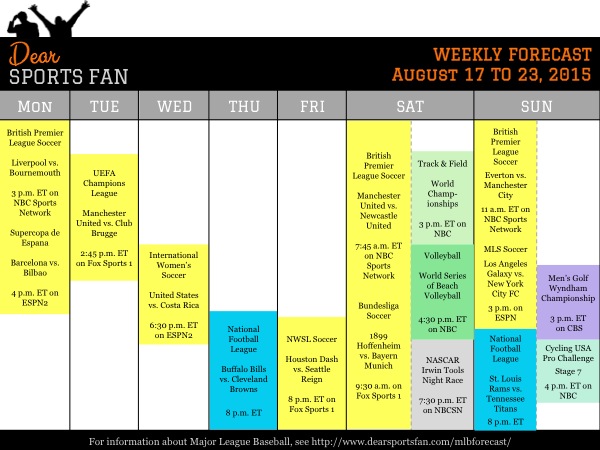 This does not include MLB baseball games. There are so many of those every day that another approach is needed. That approach is our special Daily MLB Forecast.

Monday: The Supercopa is not Spain’s most coveted soccer prize, but this game between Barcelona and Bilbao is fascinating. It’s the second leg in a two game cup tie. Bilbao upset Barcelona 4-0 in the first half, so Barcelona will need to win by even more than that today to stay in the tournament. That means the greatest offensive team in the world (Barcelona) will be throwing everything they have at the opponents in this game. Should be fun to watch!

Tuesday: During periods of Champions League play, there are a set of games on Tuesdays and Wednesdays. The best of the bunch and the most easily watched in the United States is Liverpool vs. the Belgian team, Club Brugge. Pair this game with the over-the-top good movie, In Bruges, and you’ve really got something!

Wednesday: The U.S. Women’s National Soccer team won the first stop on their victory tour last week, 8-0 against Costa Rica in Pittsburgh. Today, poor Costa Rica gets another shot at the World Champions, this time in Chattanooga, Tennessee. The results will probably be similar, but don’t cry for Costa Rica, they’ll be making some very nice money for their country’s soccer federation.

Thursday: The Buffalo Bills and Cleveland Browns are more famous for losing football games than winning them. Lucky for everyone, preseason football isn’t really football. Someone’s got to win and someone’s bound to watch, but it won’t be me.

Friday: Date night! Head off for a date night of watching some of your favorite women’s soccer players face off in a nationally televised NWSL game!

Saturday: A great blend of soccer, track and field, volleyball and car racing enables you to pretend that it’s the Olympics, if that’s your sort of thing. It’s definitely mine!

Sunday: The last stage of the Cycling USA Pro Challenge takes its riders from Golden to Denver and up the famous Lookout Mountain — a formidable pass even if the riders weren’t a mile high to start with. Which they are… so it should be exciting to watch. British Premier League soccer, golf, and preseason football round out the day’s offerings.